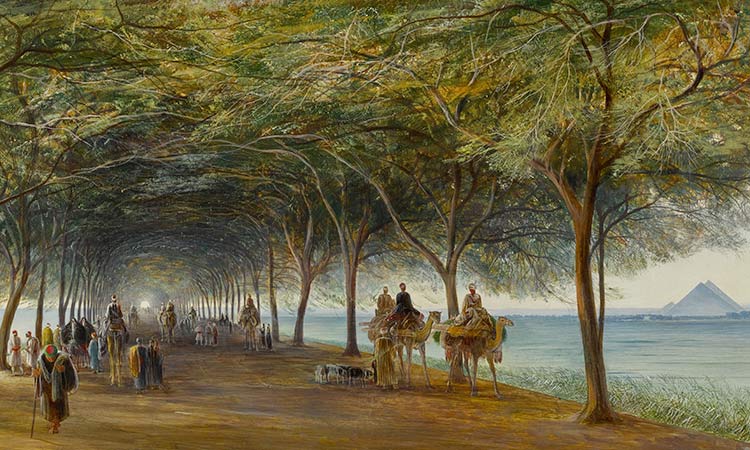 While Edward Lear’s fame today rests on his authorship of the beloved poem The Owl and the Pussycat, his work as an artist is less familiar. An intrepid traveler, among other travels, he visited Greece and Egypt during 1848–49, and toured India during 1873–75, including a brief detour to Ceylon (now Sri Lanka). While travelling, he produced large quantities of coloured wash drawings in a distinctive style, which he converted later in his studio into oil and watercolour paintings, as well as prints for his books. His landscape style often shows views with strong sunlight, with intense contrasts of colour.

He also found the time to give drawing lessons to Queen Victoria: he had originally started his career drawing the birds at London Zoo. Lear became one of the greatest ornithological artists of his era: David Attenborough is a lifelong fan of his work. However, it was his travels to Egypt, a country he would visit on numerous occasions over several decades, which would inspire some of his most remarkable works, The Pyramids Road, Gizeh being the most impressive and significant. Painted in 1873, two years after the poem’s publication, the picture is now set to come to the market for the first time in 30 years with the highest estimate ever placed on a work by the artist at auction, £700,000-1,000,000, in Sotheby’s London Orientalist Sale, March 22-30. Claude Piening, Sotheby’s Head of 19th Century European Paintings, London, said: “Our sale presents a highly varied and representative range of Orientalist paintings by all the great names of the genre. 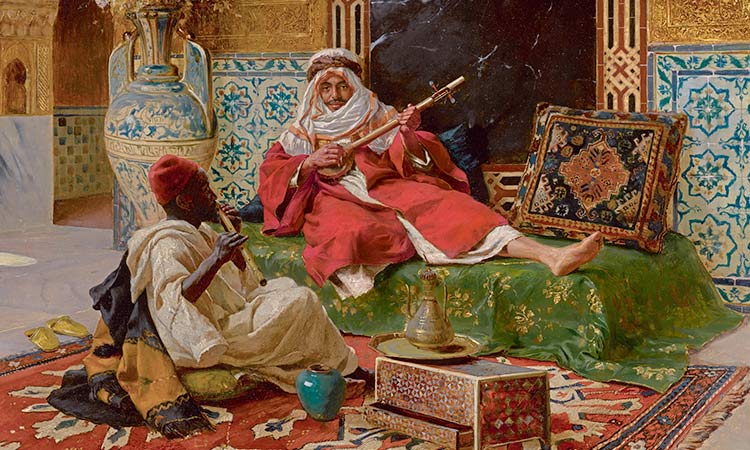 “This is not only the last chance for collectors to secure works from the legendary Najd Collection, but a unique opportunity to acquire Edward Lear’s masterpiece, The Pyramids Road, Gizeh an exceptionally beautiful and important picture we have dreamt of presenting ever since it last appeared at Sotheby’s in 1993.” The Pyramids Road, Gizeh was commissioned by one of Lear’s greatest patrons, Thomas George Baring, the 1st Earl Northbrook, to whom he had been introduced in Rome more than 25 years earlier, in 1848. Perhaps we have Baring to thank for Lear visiting Egypt at all in 1872. Baring had taken up the post of Governor General for India in 1871, and invited Lear to embark on an exhaustive two-year tour of the sub-continent.

However, while Lear was on his way to India, he was forced to abort his journey at Suez after he was injured in a bad fall. Suffering from exhaustion and jangled nerves, he turned back to Alexandria before venturing on to Cairo. With Baring’s commission to paint ‘2 pictures of the Pirrybids’ fresh in his mind (letter to Chichester Fortescue, Lord Carlingford, 28th February 1872), he made a visit to see the Pyramids Road — a long avenue of Acacia trees planted four years earlier in the European style of wide tree-lined avenues to celebrate Empress Eugenie’s visit for the opening of the Suez Canal.

The following day, he returned and made a sketch which was the basis for this painting, persevering over many hours of observation and all the while battling insects, heat and interruptions of passers-by, curious to see what he was doing. The Pyramids Road, Gizeh is a scene that might now be regarded as nostalgic or historic, but in 1873, it depicted a very modern scene of Egyptian life. Lear was fascinated and inspired by the modern changes he discovered in Egypt, notably the Suez Canal. This same sense of the grandeur of modern engineering can be found in this painting that contrasts two feats of construction — one modern, the other ancient. 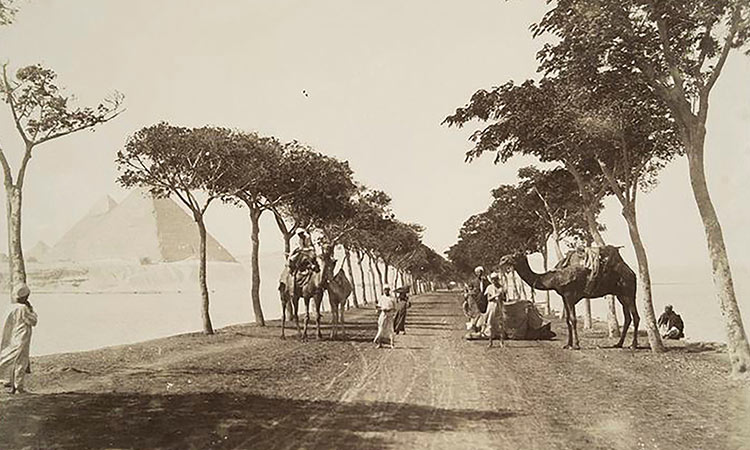 To have built a wide elevated causeway through the floodplain excited Lear as much as the engineering that built the pyramids next door to it, thousands of years before.

To say that he was impressed would be an understatement, and he wrote: “Nothing in all life is so amazingly interesting as this new road & avenue — literally all the way to the Pyramids … the effect of this causeway in the middle of wide waters is singular… & were one sure of quiet, there is much poetry in the scene, but it wants thought and arrangement.” (Entry in Lear’s diary, 13th & 14th October 1872, quoted in the Edward Lear catalogue to the Royal Academy Exhibition, p. 154).

This year’s Orientalist Sale by Sotheby’s will include the final remaining works from the Najd Collection, further to its sale of works from the collection in 2019, in what became a landmark auction for Orientalist art, with nine auction artist records set, including for Ludwig Deutsch, Jean-Léon Gérôme and Gustav Bauernfeind. The Najd Collection was born out of the remarkable vision of one man who, over a decade from the late 1970s until the late 1980s, built what was undoubtedly one of the greatest private collections of Orientalist paintings in the world.

The connoisseur was among the first Middle Eastern collectors to recognise the quality and importance of this western genre, and to anticipate the following it would attract in the countries it depicts. Through the collection, which when complete numbered 155 paintings, its founder set out to build a panoptic picture of his homeland and culture as it looked a century or more ago, from when few other visual records survive. Without exception, the artists he chose sought to venture beyond the confines of their own experiences, travelling to Turkey, North Africa and the Middle East. Their painted legacy provides what is today recognised as an invaluable documentary narrative of the countries they visited. 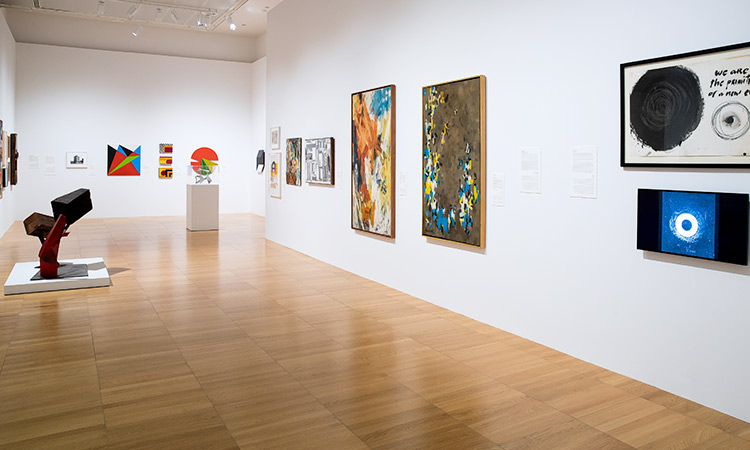