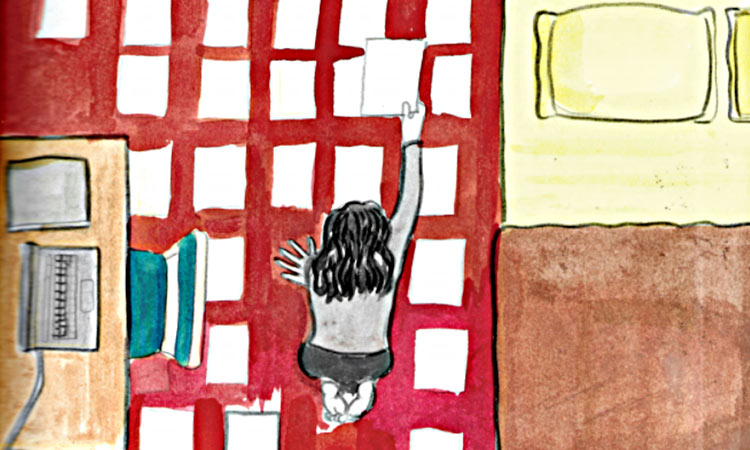 A scene from the novel.

The Jameel Library, an integral part of Jameel Arts Centre, Dubai’s contemporary art institution, has published its first illustrated novel by Sarnath Banerjee. ‘17-year Cicada’ features ten chapters, released every fortnight on the Centre’s website. ‘17-year Cicada’ is an episodic account of a young woman trapped in a vast library. She goes through the stages of denial, anger and acceptance. Surrendering to her fate, she roams around the desolate reading rooms, walks between the shelves, takes selfies and eats from the well-stocked refrigerator. Sometimes she has imaginary conversations. The place feels like the furthest outpost of the Gobi desert.

But is she really alone?

Banerjee is a graphic novelist, artist and co-founder of Phatomville, a comics publishing house. It aims to provide a platform for Indian writers and artists to produce mature graphic novels. Here is more about it, as detailed on its website, in true comic-book style: “According to Dr. B.M.W Das, after being knocked about by several publishers, known-unknown, big-small, real-phoney these children of migrants, out of sheer annoyance wringed all their resources and that of their distant relatives, by forcing them to eat one meal a day and making them wear second hand clothes, established “Phantomville”, the one stop comic shop.

ADIHEX hunts for talent connecting artists to the environment

“They encourage unknowns, semi-knowns and could-bes to create and co-create comics with them. They claim to have an aim, which is to break down the universe they live in, into words and pictures and speak aloud or in hushed tones the most immaculate stories of our material and spiritual world.

“Das babu further recommends, that they be given all the support needed for them to roller blade through, to their destiny”. (“Babu” is a respectful title or form of address for a man, especially an educated one). Through his five books of graphic fiction published by Penguin and Harper Collins, Banerjee explores the South Asian middle-class nature, delving into themes such as power, masculinity, bureaucracy, rumour, class-system, meritocracy, religion and the uncanny.

Banerjee’s graphic works often centre on everyday Indian experiences. Often anecdotal and autobiographical in nature, they are imbued with a distinctive sense of humour. He describes himself as a recorder of a rapidly changing India. 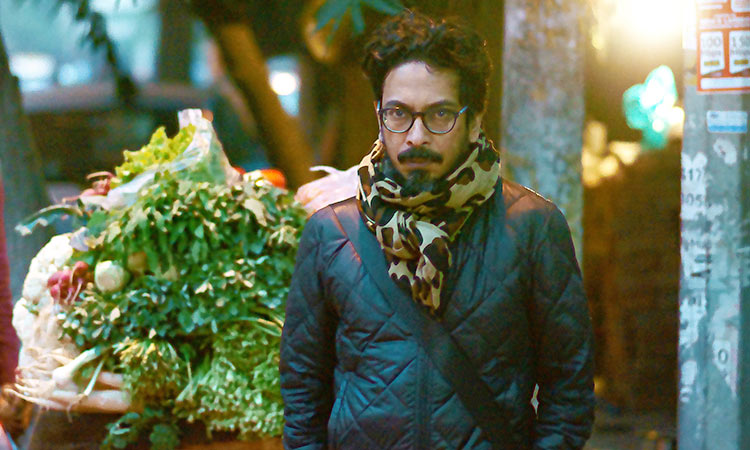 He previously produced the ‘Liquid History of Vasco Da Gama’ for Kochi Biennial, 2014, and The Poona Circle, a series of vandalised history textbooks for Pune Biennale, in 2017.

His solo exhibition, ‘History is Written by Garment Manufacturers’ was at the CCA, Glasgow, in 2012. He has been a fellow of Akademie Schloss Solitude, Indian Foundation for the Arts and the MacArthur Foundation. In 2019, he received the Belknap visiting fellowship from Princeton University and CAST award by Massachusetts Institute of Technology. He currently writes Phantomgraph, a fortnightly column with the Indian news Paper Mint Lounge.

His novel is published every fortnight on the Jameel Arts Centre’s website, and through subscription, readers can be alerted on the release of new chapters.

Magicicada is the genus of the 13-year and 17-year periodical cicadas of eastern North America. They spend almost the full length of their long lives underground. In the spring of their 13th or 17th year, they emerge in tremendous numbers. In two months, their lifecycle is complete and they disappear for another 13 or 17 years.

Subjects handled include exhibition histories; pedagogy and alternative arts education projects; contemporary discourse and theory from and about the region, selected artists’ monographs and mapped journeys of practice and their influence. Jameel Arts Centre presents curated solo and group exhibitions, drawn both from the Jameel Art Collection and through regional and international collaborations. Current exhibitions include Age Of You, Hiwa K, Sunoj D and Namrata Neog, Hassan Khan and Conrad Shawcross.

Here are a few excerpts from the novel, seen on Jameel Arts Centre website

10th century Baghdad wasn’t such a bad place for scholars. They were given a free hand, lived a life of relative comfort and were allowed to pursue knowledge single-mindedly.

At the end of the 9th Century, with the decline of the Umayyad Caliphate and the rise of Abbasids, books were gradually transferred from Damascus to Baghdad, paving the way to the rise of the great Baghdad libraries. The most famous of them came to be known as The House of Wisdom.

One scholar who enjoyed the fruits of this era was the noted Arab philosopher Al Kindi, who laid the foundation of philosophy in the Arab world as well as translating Aristotle, contributing to saving him from being permanently lost to time.

A few centuries back, Emperor Justinian had annulled the Athenian school and most of the Hellenic knowledge was smuggled to Baghdad via Umayyad Syria. Much was lost and what survived was later translated, reworked and recirculated into the world. Abbasid Baghdad was famous for hosting Al Hajjaj, the translator of Euclid, and Al Khwarizmi, the inventor of Algebra. Also known as Algorithmi, Al Khwarizmi, adapted the Hindu numbering system and invented the Arabic numerals we use today.