Cleaning up by calling out: the art of Kazakh artist Saule Suleimenova - GulfToday 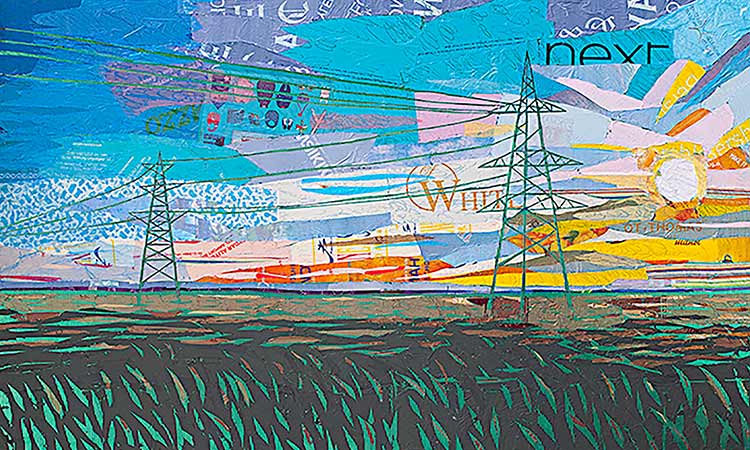 Composition with plastic bags and polycarbonate.

Andakulova Gallery, Dubai, is presenting the works of artist Saule Suleimenova from Kazakhstan, with an inaugural on Mar. 9. The exhibition will run till Oct. 9, and will coincide with Art Dubai (Mar. 17 – 20). Suleimenova is a visual artist who works with edge-of-the-art techniques and media, including recycled plastic, cellophane and polycarbonate. In a recent daring departure, she has been working with collages on plastic bags and creating cellophane painting.

Her artwork is made of plastic bags, glued on to polycarbonate sheets. Pieces of colourful plastic bags are stuck with melted silicon glue, on a cover of polycarbonate or plastic bags on polyethylene. Some of the bags are branded with names from boutiques, retail shops, supermarkets, or are just garbage bags.

The artist’s new medium could definitely be food for thought for those who thought polycarbonate and cellophane are items used only in the manufacture of compact discs, DVDs, mobile phones, eyeglasses, or in food packing. She grew up Soviet Kazakhstan, in Almaty, the then capital of the country. Therefore, decolonisation is a very strong feature in her works. Right at the beginning of her artistic career, she began experimenting with different techniques — water colour, wax-engraving and acrylic on canvas. At the end of the 1980s, she joined the alternative underground art group Green Triangle, where she was deeply impacted by punk ideas. However, she graduated from an architectural academy. These trends are fundamental to her artistic development. Post 2004, she turned to contemporary art and began using archive photo-documents of the Kazakh past, of the nineteenth and twentieth centuries.

“I was trying to express the real face of Kazakhstan, to find a balance neither complimentary nor derogatory. From this time, I started working with interactive photography and painting”, she says. “It helped me discover the idea of how layers of reality and imagination, past and modernity, uncover postcolonial paradigms and reconcile with one’s own identity.” Madina Tlostanova, Professor of Postcolonial Feminisms at Linköping University, Sweden, has commented that “through decolonising visuality and particularly, notions of the beautiful, Suleimenova attempts to teach Kazakhs to unlearn their desire for those lacquered ersatz things they were taught to like and appreciate as beautiful, and as their own. She wants to decolonise their idea of Kazakhness …” 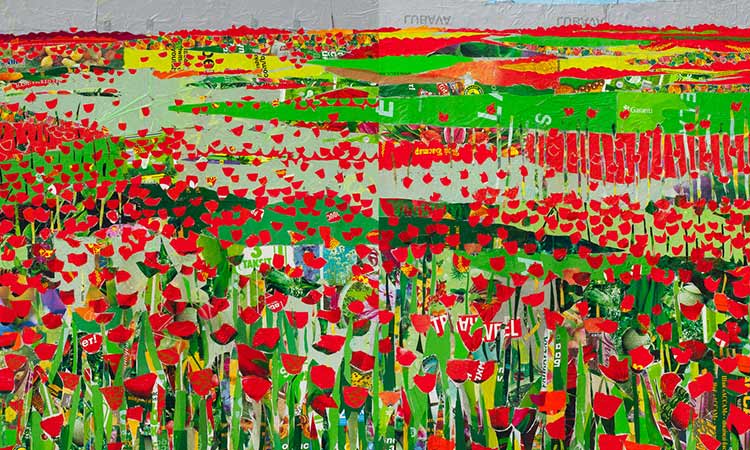 In short, Suleimenova tries to reconnect and reconcile Kazakh culture and the aesthetics of revolt through modernist artistic devices. Her art language refers to archaic Kazakh culture, with every gesture a kind of sacral ritual, connecting Kazakh reality to other worlds. Through the poetics of the everyday, she finds the pathos of eternity.

Her work has had a strong social impact in Kazakhstan and she takes part in educational, ecological and other social events. For example, she has involved people to bring her plastic bags. Plastic pollutes and stays in the ground for decades and hardly dissolves.

Thousands of tons of not dissolved trash lie in a huge territory of the Kazakh steppe. Suleimenova started working with plastic bags in 2014. By using this reproducible and not decomposing material, she says she discovers new meanings. “I accept the aesthetics of waste as a part of human existence; therefore I’m ready to build people and landscapes as structures within it”, she says, only half in jest. “I want my images to be recognisable, even though I work with technically coloured plastic chaos or waste (not using traditional artistic paints)”. This also signals to people that the idyllic Kazakh pastoral scenes are now actually filled with waste, and it is time to clean up.

The art deals directly with public, in site-specific environments, since the plastic makes people an inseparable part of the art making process. Kelin was a 2015 project, partly collective, which involved gathering plastic bags. “People (were asked to) bring me the bags, so I could turn them to a material for creating artwork,” Suleimenova says. It was hung over the pedestrian street in Almaty. The practice took further steps from her studio or plein air paintings, as it dealt directly with the public in their environment.

One Steppe Forward (2019) stems from Suleimenova’s experience of Qazaq Koktemi, which was a series of peaceful protests by Kazakh civil society, in 2019. During this time of social upheaval, thousands of Kazakhstanis protested against a fraudulent presidential election and the unlawful renaming of their capital city, accompanied by other troubling political events. The work reflects the dynamics of Kazakh protest: its faces, bodies and colours.

Plastic gradually became a quintessential expression of Suleimenova’s life and art experience. The material she uses comes from people from different countries, with different backgrounds and life stories. So, when she uses plastic, she recycles not only material artefacts, but also different social and cultural attitudes. Her artwork is a mixture of the past and the present, of painting and photography, of steppe and urbanisation. It is a fusion of archetypes, where it is confusing as to what is artificial and as to what is real. Her work has been commissioned by the Sharjah Art Foundation, sold in Christie’s auction in London, and exhibited at Self Festival of the 56th Venice Biennale, Manifesta 11 in Zürich, Second Moscow Biennale, East of Nowhere exhibition in Turin, Foundation 107, One Belt One Road exhibition of Hong Kong Women Federation and in many other local and international projects.