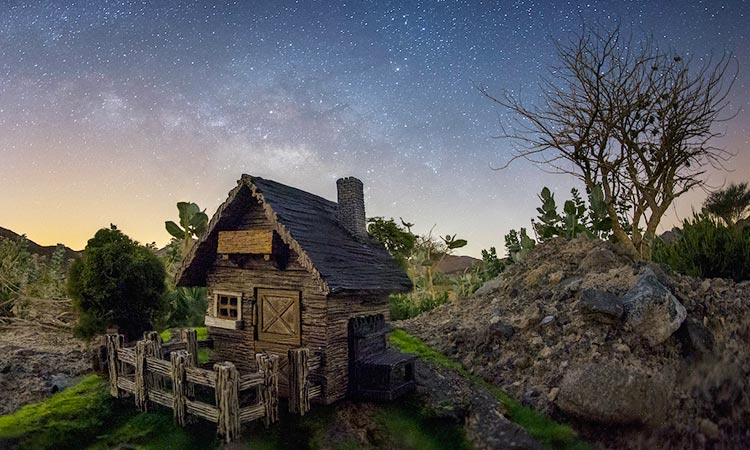 Samy Al Olabi is one of the celebrated photographers whose work will be showcased at the fifth edition of the Xposure International Photography Festival in Expo Centre Sharjah (Feb. 10 – 13). Award-winner Al Olabi’s enviable body of work in astrophotography is regarded as one of the most renowned in the region.

He is a trend setter, known for his conceptual photography projects that mix abstracts and miniatures with astrophotography, to produce extraordinary images. One of his recent projects, ‘Nowhere Land’, has been globally acclaimed.

Some of Al Olabi’s panoramic shots of night skies and planets have been used as iconic backgrounds in Microsoft and Apple operating systems. His work and articles appear frequently in international magazines and newspapers.

He is Egyptian-Syrian, and is currently based in Dubai. Inspired by his love for nature and night skies, he reaches for the stars from the dark corners of Arabia. “When you go out and shoot the night skies from a dark, remote location, the serenity of the place, and the peace you feel within yourself, liberates you from the constraints of modern life, and you feel like you are finally back to real humanity, blending with nature and its beauty”, he says. He was passionate about astronomy since childhood, and found in astrophotography a perfect match, since it combined his love for astronomy, nature and landscapes with adventures, travel and camping. “This beautiful recipe is just perfect for me”, he says.

Handling them, he felt a strange mix of fear, excitement and serenity. “This awesome sense of beauty and meditation is something that deserves long hours of driving and travelling. “That feeling you get when you switch off your engine after you reach your destination, and you turn off the head lights, look up at the sky and be amazed with the endless count of stars, is a beauty that could never be put in words. “In such places, you can really experience the sound of silence and enjoy it, and the fact that most of such remote locations have no telecommunication network coverage, adds to the serenity of the experience and the peace you have with yourself. 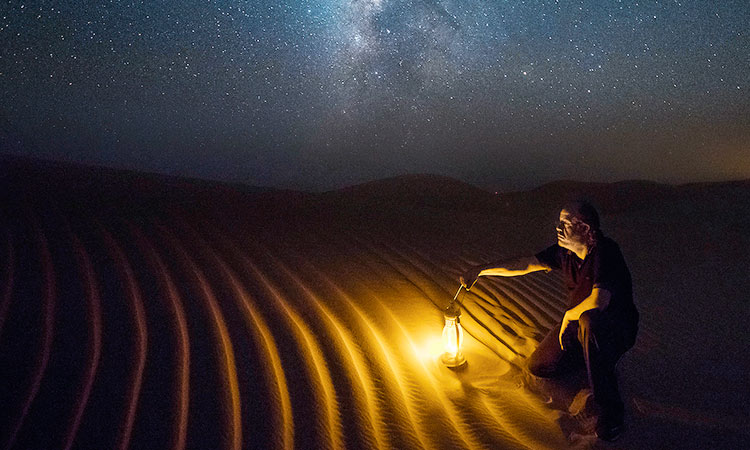 A light could lead the way by Samy Al Olabi.

“It liberates you from all modern life constraints and you are finally back to your real humanity, blending with nature and its beauty. You finally feel home”.

He speaks of how he bonds with the Emirates thus: “I went almost everywhere across the UAE, scouting locations, looking for different landscapes and compositions, and I was quite lucky to capture some beautiful shots; but like any other passionate photographer, I couldn’t get enough of that. “I have basically consumed all different landscapes with every foreground possibility; mountains, deserts, trees, lakes, roads and cars. I just wanted more than that: I wanted to do something different.

“The United Arab Emirates is a mix of two beautiful contradictions: shiny glamorous cityscapes and raw, untouched nature. Basically, there are three types of landscapes — yellow reddish deserts with beautiful sand dunes and ghaf trees, or brownish ophiolite mountains, known as Hajar Mountains, surrounding scattered small valleys, and rain water ways, with green bushes and acacia trees. “And finally, there is a transitional strip, which is a strange mix between mountains and dunes”. His work and photography articles are regularly featured in various international magazines and newspapers, with notable contributions to Practical Photography magazine, PetaPixel, CNN, BCC Sky At Night, DIY photography and nPhoto. He has won multiple local and international awards, among which were 1st Place Winner in UAE Environmental Photography contest 2014, 2nd Place Winner in Fujairah International Photography Awards 2016 and 4th Place Winner in UAE Heritage Photography contest, 2015. He was honoured by His Highness Sheikh Dr Sultan bin Mohammed Al Qasimi, Ruler of Sharjah, during the Islamic Art Festival of Sharjah in 2015 at the exhibition Light & Shades.

Al Olabi has also been a guest on multiple national and local TV channels and his work has been exhibited in various exhibitions across the United Arab Emirates.

He has been spreading his passion for astronomy and astrophotography in other ways also. He has conducted lectures and hosted workshops through notable collaborations with Nikon School, HIPA Union of Arab Photographers, Emirates Photography Society, Xposure, MAS and KHDA, among others.

He partnered with Apple in their Moon Photography campaign, which was published worldwide in multiple international and local magazines and printed on billboards on Sheikh Zayed Road and at Dubai International Airport. He has taken part in the coverage of astronomical events such as the partial Lunar eclipse (January 2018), the longest total lunar eclipse in the century (July 2018) and the annual Solar Eclipse of (26 December, 2019 and 21 June, 2020). The events were covered by the media. His advice to emerging photographers consists in “getting out of your comfort zone, doing something different, thinking outside the box and breaking the trend. “Adding some abstracts and conceptual thoughts to your photography is what will differentiate you from others. You do not want to be that photographer whose only aim is hoard equipment and excel settings”.