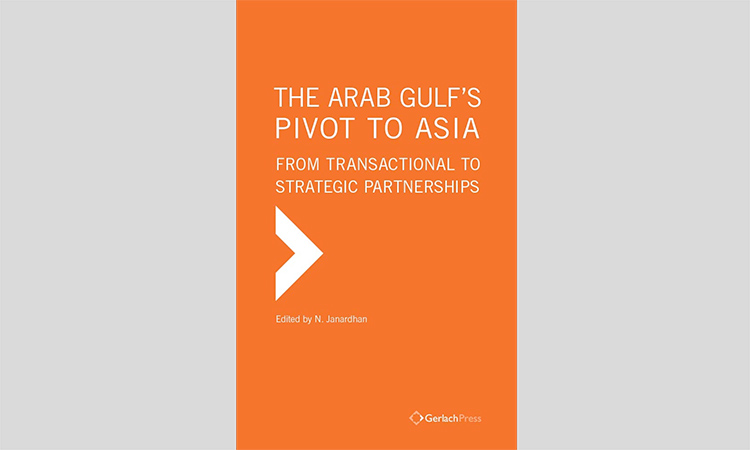 This book documents the exponential growth of the relations between the countries of the Gulf and Asia over the last two decades.

A new book, edited by a UAE-based academic, documenting the exponential growth of the relations between the countries of the Gulf and Asia over the last two decades, was released recently during an online event hosted by the Emirates Diplomatic Academy (EDA).

Titled “The Arab Gulf’s Pivot to Asia: From Transactional to Strategic Partnerships,” the book edited by Dr N. Janardhan argues that while economic relations still form the fulcrum of Gulf-Asia association, ‘strategic’ partnerships are fast becoming the norm. It underscores the expansion beyond the economic dynamic, encompassing political and even security arrangements. The book focuses on these developments in the backdrop of the global economic centre of gravity shifts from the West to the East. It details the Gulf’s ‘Look East’ policy in the economic realm and its impact on the regional introspection in the political arena, which is likely to shape international relations in the coming decades.

Book Review: ‘The Devil and the Dark Water’ by Stuart Turton

A senior research fellow, managing the Gulf-Asia Programme at the EDA, Dr Janardhan argues that, along with economic diversification, the Gulf countries have also diversified their foreign policies, especially with China, India, Japan and South Korea, among others. “This could eventually alter the US-centric security paradigm that currently prevails in the Gulf. Many of the chapters explore and rationalise the need for an Asian-led collective security architecture for the Gulf.” With chapter contributions from academics and former diplomats in China, Japan, South Korea, India, the United Kingdom, the United States, and the UAE, the book has been published by Gerlach Press, Germany. According to the author, the book serves as a useful tool for scholars, policy-makers and students in the Gulf, Asia and elsewhere, including Europe and the United States.

“It puts the current developments in context, increases the understanding of the growing complexity in the global economy, politics and security scenarios and throws light on how the Gulf-Asia relationship is broadening into a multilateral framework,” he explains. The book, the fourth by Dr Janardhan, fills a gap in the existing literature “as there is no work that covers the same range of Asian countries in their multidimensional engagement with the Gulf countries.” The author’s other books include A New Gulf Security Architecture: Prospects and Challenges for an Asian Role [(ed.), Gerlach, Germany, 2014]; India and the Gulf: What Next? [(ed.), Gulf Research Center, Cambridge, 2013]; and Boom amid Gloom: Spirit of Possibility in the 21st Century Gulf (Ithaca, UK, 2011).

With a PhD from the Jawaharlal Nehru University, New Delhi, Dr Janardhan has been a resident of the UAE since 2000. In his previous stints, he has served as a political analyst in government and private institutions, including Gulf Today. The author shares some statistics in the book to press home his argument about Asia and Gulf-Asia ties.

“In 1995, the combined GDP of E7 (comprising China, India, Indonesia, Brazil, Russia, Mexico and Turkey) was half of G7 (comprising United States, United Kingdom, France, Germany, Japan, Canada and Italy). By 2015, the GDPs of both groupings was on par. By 2040, the GDP of E7 could be double that of G7,” he points out. Further, he notes that “the GCC’s total trade with emerging and developing countries (mostly in Asia) jumped from $124 billion in 2000 to $667 billion in 2018. This surpassed the GCC’s total trade with advanced economies, from $207 billion to $527 billion during the same period.”

Stressing the overlap of Gulf-Asia strategic interests, the author mentions that “if the West is no longer the main buyer of oil or trade partner of the region, then it would be less inclined to bear the security burden alone, which it has done for so many decades. And, if the East has to ensure regional stability and unhindered growth in the future, it has to stop relying on Western security guarantees and get involved in one form or another.” And the “Gulf governments are recognising it…in fact, they did so long before the United States announced its ‘pivot to Asia’,” notes Dr Janardhan.