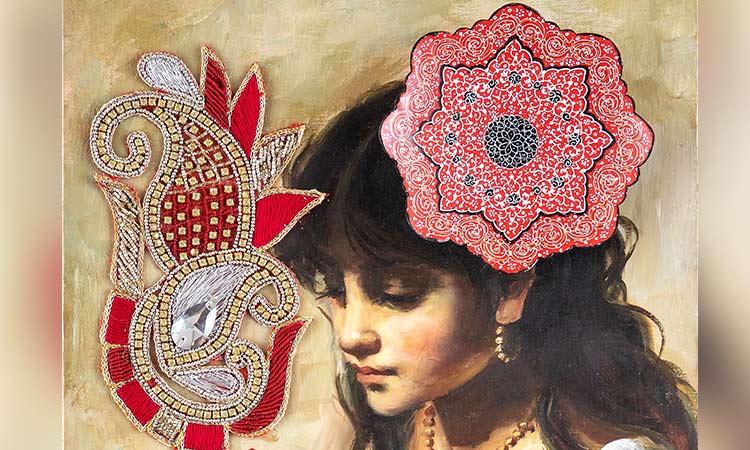 Lawrie Shabibi, Alserkal Avenue, Dubai, has announced The Lacemaker by Farhad Ahrarnia (Jan. 20 – Mar. 4). It is the gallery’s opening exhibition of 2021, and the artist’s third solo at the gallery. Comprising images drawn from a diverse range of sources and media — the internet, printed or painted material, and composed with embroidery, painted metalwork and grooming items — the exhibition gives new insight into the Shiraz (Iran) and Sheffield (UK) based artist’s intriguing eclectic practice.

Role-playing and performance, the perception of surface and the notion that appearances are skin deep, are recurrent themes in Ahrarnia’s work, here expressed in four distinct groups of Embroideries. They include: faked portraits of Boko Haram brides, depicting much older, attractive individuals, in order to gain attention and sympathy; various white film actors in “Arab dress” portraying TE Lawrence (“Lawrence of Arabia”); the Italian star Franco Nero dressed as silent film star Rudolph Valentino as “The Sheikh”; and performance artist Nasim Aghdam, the “YouTube Shooter”, who, having been heavily censored online for her vegan and animal rights activities and motivated by perceived discrimination by YouTube towards her channels, stormed their headquarters, injuring four, before turning the gun on herself.

Each of these characters stand for a set of tangled, interrupted, failed or manipulated ideals and desires. Alongside them, a final group of Embroideries shows covers of Harper’s Bazaar magazines, superimposed with images of actual bazaars. Exhibited with the Embroideries are works of a type Ahrarnia has never shown before, but which have been in development for the past six years. Working with a brother and sister team of commercial painters in Hamdan, Western Iran, he uses Soviet social realist and 19th century European style paintings, as the basis of his compositions. Adding objects acquired from the bazaar straight to the surfaces of the artworks, Ahrarnia’s compositions are a direct challenge to the hierarchy of painting vs. found objects.

Can't get enough of 'Bridgerton'? Here are some other period dramas you can stream on Netflix

His sourcing of objects and inspiration comes from the antique shops he trawls, the bazaars of Iran and the many car-boot sales he used to attend in Yorkshire, almost religiously every Sunday morning, regardless of the weather. Ahrarnia is aware of the implications of appropriation and its conceptual potentialities: but through the creation of reproductions, a new set of qualities emerges. He uses images of existing paintings; but not to produce exact copies. The applied brush strokes and the painterly marks achieved are always different from the originals — sometimes slightly more crude or coarse, or more rigid and self-conscious.

Ahrarnia’s interest in these qualities, the notion of cultural mimicry which never feels “authentic”, runs deep in many aspects of our own cross-cultural multiple realities and our state of selecting and editing images, which to some degree, reinforce our status, interests and ambitions. “Perhaps even through the initial simple acts of flickering though, browsing and selecting and saving images, some degree of partial personalisation and ownership is achieved by each and every one of us,” he has said.

Ahrarnia makes these images his own, through the additive process of embroidering, creating a texture, otherwise lacking in flat digital images, and by fixing objects to paintings made by commercial painters, questions notions of originality. His practice comprises a diverse range of meticulously crafted works that cover questions of ideological narratives, national identity and intercultural exchange. He is deeply influenced by the traditions of his hometown Shiraz; his methodology consists of ancient techniques associated with its indigenous culture such as embroidery, metalwork and mosaic, to draw on socio-cultural constructions and motives that reference national codes.

Another key influence is Kazimir Malevich. Malevich’s concept of Suprematism sought to develop a form of expression that moved as far as possible, from the world of natural forms (objectivity) and subject matter, in order to access “the supremacy of pure feeling” and spirituality. The sublime beauty and quasi-religious experience inherent to Malevich’s work address a universality which transcends national cultures and identities. For the artist, Suprematism echoed in the urban labyrinth that was Shiraz in the seventies and eighties, where he grew up amidst modernist architecture overlaying ancient ruins, to create a dynamic city. By juxtaposing traditional Orientalist craft techniques and paragons of popular culture, Ahrarnia thus explores the dichotomy between Islamic traditions and Western society’s aspiration for progress and modernity.

Through a rigorous methodology of citing art historical references, particularly those of Saqqakhaneh (a movement from the 1960s where the then contemporary artists tapped into Iranian Popular Culture, traditional craft and Persian artefacts), Russian Constructivism and Surrealism, he dissects and re-articulates the spirit and experience of modernity and modernism, in contexts other than exclusively Western. He thus entangles, twists, complicates and interrupts established art historical categories, narratives and dichotomies. Ahrarnia holds a degree in Experimental and Documentary Film Theory and Practice from the Northern Media School, Sheffield Hallam University, England. He has exhibited in several solo shows such as Art in Another Language, Galerie Janine Rubeiz, Beirut, 2019; Something for the Touts, the Nuns, the Grocery Clerks and You, Lawrie Shabibi, 2017; Stage on Fire, Rose Issa Projects, London, 2014; and Stitched, Leighton House Museum, in collaboration with Rose Issa Projects, London, 2008. 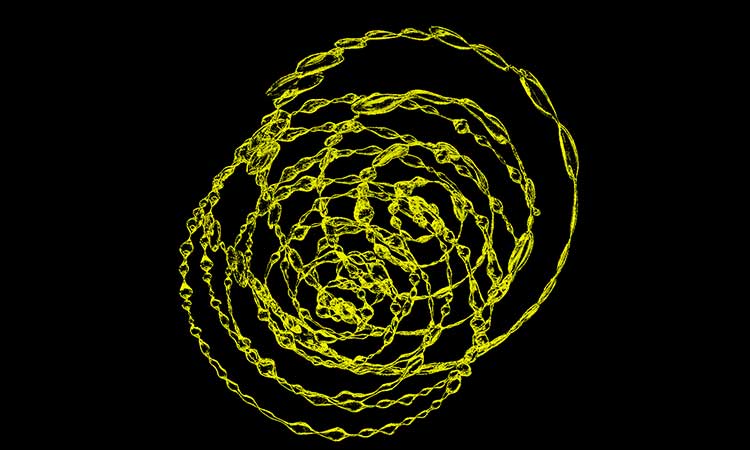