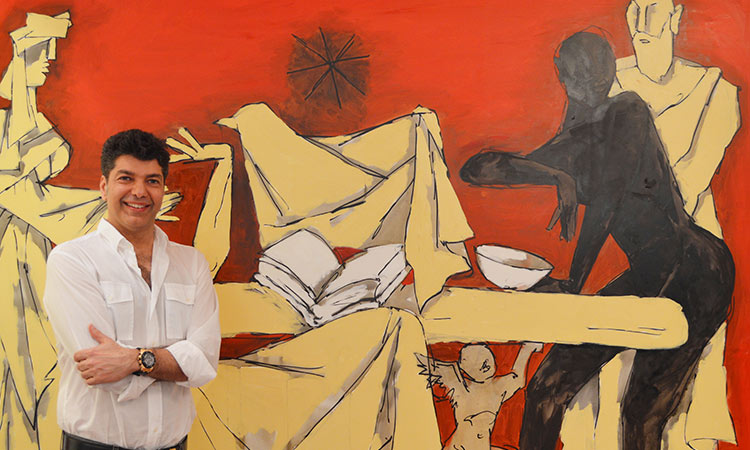 The “Jamil Naqsh: Magic of the Line” sale (Dec. 25, 2020 – Jan. 15) by Artiana, offers early drawings and sketches of the artist, from The Jamil Naqsh Family Collection, at affordable prices. The sale presents a unique opportunity for new and seasoned collectors to acquire works by the beloved artist, with stellar provenance. Artiana is a click and mortar hybrid auction house based in Dubai. It was founded by Lavesh Jagasia, an art connoisseur who has more than three decades of experience in the field of Indian art. He is also an expert in Modern and Contemporary South Asian art. Naqsh (1939 – 2019), Pakistan’s distinguished modern master, was born in Kairana, Uttar Pradesh, in India, in 1939.

Despite having a large family, he preferred spending time alone. He was a man who lived for his art; he spent all the time he could painting, for hours at a stretch, seldom leaving home, and with a sense of urgency. An avid reader, his books served as the foundations of his lifelong curiosity about art and aesthetics. The story of his journey from a young boy to the master he became is riveting, starting during the emergence of Pakistan in 1947. As with many of families during that tumultuous period, Naqsh’s family got separated and while he reached Pakistan with his older brothers, they were never reunited again with his father who was left behind. Raised without parents to guide and provide, he faced hardship and struggle early in life, but remained steadfast and positive in the face of adversities. 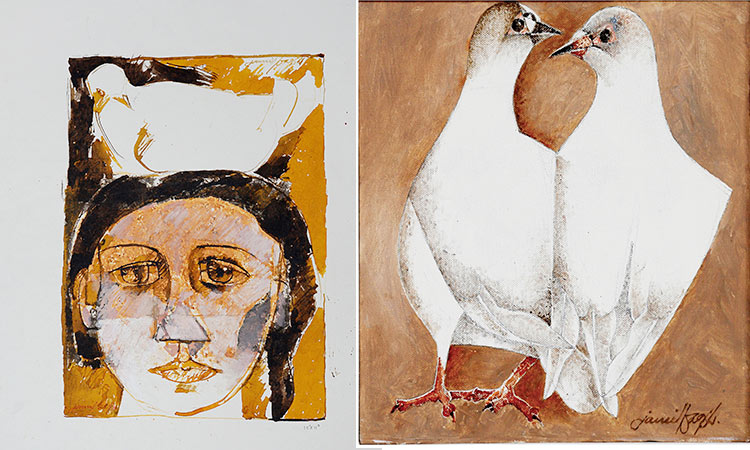 Woman and Pigeon, ink and gouache on paper, left, and  Two Pigeons, oil on canvas.

At age fourteen, Naqsh began a two-year trek home to Kairana, to find out what had become of his family — only to find that his home, as he remembered, no longer existed. This experience later lent a melancholic note to his works, evoking a deep feeling of longing and nostalgia. His journey ended in Lahore, where he enrolled at the Mayo School of Arts and Crafts, and where his lifelong affair with art started. The years of learning in Lahore came to an end in 1954, when he decided to move and settle in Karachi. Particularly skilled and gifted, he was offered a job in the studio of a leading advertising company, offering maybe for the first time, a regular income that enabled him to purchase much desired art materials.

The thrill of this, from the moment of arriving home to unpacking the materials he bought with his very first salary, was never forgotten, and would often be compared with the recognition and honours he got later in his career. Naqsh remained intrinsically a figurative painter; the human form gave him the greatest aesthetic satisfaction, and his genius in focusing on a single subject and recreating it in a variety of forms, is indisputable. By the mid-60s, he evolved a distinctive personal style. The female form became a leitmotif, juxtaposed with pigeons, in an inspired coupling. Through the years, countless opportunities to exhibit his work abroad came his way, which he declined. He had strong convictions that an artist must work out his aesthetics and know where they came from, and that he must first be recognised and understood in his environment before he ventured further. 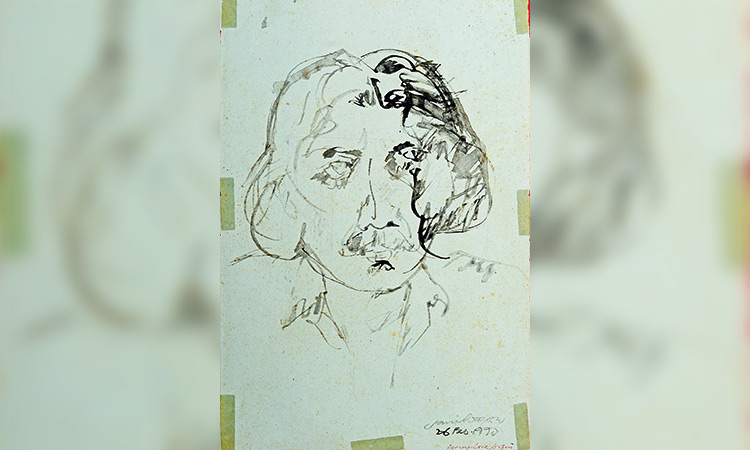 Therefore, the recurring motifs in his works centered on cultural traditions, along with the occasional appending of something new to them. While extremely successful in Pakistan, Naqsh eventually decided to move to the UK to focus more on his art. Despite initial reservations, his works were exhibited extensively in Pakistan, India, the UK, and the UAE. He received many honours and recognitions; among them are medals and awards from the Pakistan Art Council, Karachi; the Ministry of Culture, Pakistan; and the Arts Council of Pakistan.

In 2003, a retrospective of his work was held at the Mohatta Palace Museum in Karachi, a rare honour for a living artist. He passed away in London in 2019, after a sudden and brief illness. “I am a modern painter, a painter of the human form. It is said the body consists of 60 billion cells. It is said a human being is a personality and intellect. Or is it a machine? I do not have the knowledge of the ancient Egyptian embalmers, I only know I live within these mysteries,” he has said. Saleem Asmi, veteran journalist and former editor of Dawn newspaper, Pakistan, has noted that “all art is built on the foundation of the line and the countless configurations it creates. “The line that has length without breadth or thickness, that bends curves, mingles with other lines, overtaking them, overlapping them, and thus, when drawn by trained and cultivated hands, creates breathtaking images”.

Since times immemorial, he goes on to say, from the ancient cave paintings to the hoary arts of Egypt, China, Latin America, through the Renaissance to this day, all great artists have treated drawing the line with utmost sanctity, almost religious reverence. Da Vinci has left hundreds of drawings of various elements, describing their functions and use. Goya, Picasso, Matisse, Modigliani, Dali and Klee (he has left as many as 18,000 drawings), were all past masters in drawing. “Jamil Naqsh is one of those few artists in Pakistan who believe, and very strongly so, that the roots of good visual expression lie in one’s expertise in drawing”, he concludes. 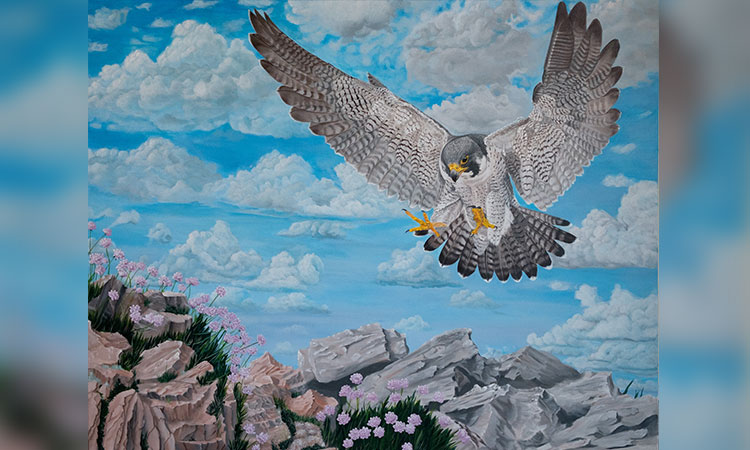 There were 25 artworks displayed by artists from different nations, including the UAE, Palestine, Armenia, Iran, China, Pakistan and India. “They showed the unity in diversity of Dubai through their artworks”, says Mistry.