Rhapsody in blue at Lawrie Shabibi exhibition in Dubai - GulfToday

Rhapsody in blue at Lawrie Shabibi exhibition in Dubai 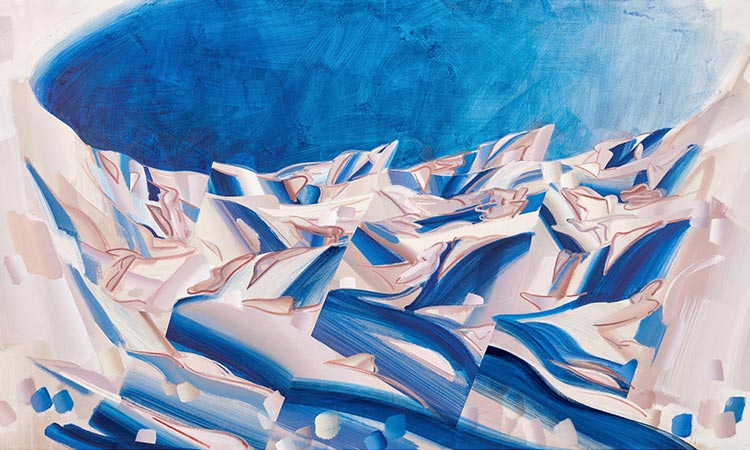 Lawrie Shabibi, the art gallery at Alserkal Avenue, Dubai, enters 2021 with the exhibition Blue — a show that explores the dialectic between meaning and visual sensation. Dominated by the colour in its various hues, the exhibition brings together works by a multi-generational group of artists — Shaikha Al Mazrou (b. 1988), Driss Ouadahi (b. 1959), Shahpour Pouyan (b. 1979) and Su Yu-Xin (b. 1991). “In person shows are at the heart of what we do; but for those who are unable to make it, we hope that you will enjoy exploring the exhibition online”, say Asmaa Shabibi and William Lawrie, gallery founders.

For them — and for many others, for sure — blue is a colour that is saturated with meanings — freedom, intuition, imagination, expansiveness, inspiration, sadness, faith, spirituality, wisdom, peace, serenity, ethereality and infinity — to name just a few. The fact is that blue has more complex and contradictory connotations than any other colour. Always among the most costly, scarce and difficult to extract, blue pigments were valued by ancient Egyptians, to whom the colour represented the Nile, sky, creation and divinity. The lapis lazuli they used in their jewellery and statuary was mined in the mountains of Bamiyan in Afghanistan and brought overland thousands of miles across the deserts of Arabia.

In medieval Islamic traditions, blue signified the impenetrable depths of the universe, and was used in the illumination of fine manuscripts, in the glazes of the ceramic tiles that sheath sacred buildings and on carpets, historically that most precious commodity; while from the 11th century onwards, blue was associated with divinity in Europe, and the builders of gothic cathedrals lined their walls with dazzling windows of glass coloured with cobalt. Chinese blue and white porcelain, which began production during the 13th century, borrowed from the Persian technique of cobalt blue underglaze, and is exported worldwide still.

The colour blue has kept its cachet across the centuries and individual artists have responded to it: from the star-strewn sky of Titian’s Bacchus and Ariadne (1520s), Picasso’s Blue Period (early 1900s), to Yves Klein’s patented International Klein Blue (1960), blue in its various hues continues to inspire. Geometric abstraction and transparency suffuse Ouadahi’s practice. For Blue he presents Errance/Wandering (2018). Known for his depictions of brutalist structures and the built environment of urban alienation, his more recent works are devoid of social commentary, focusing instead on colour, light and transparency, engendering a transcendental feeling through visual sensation. 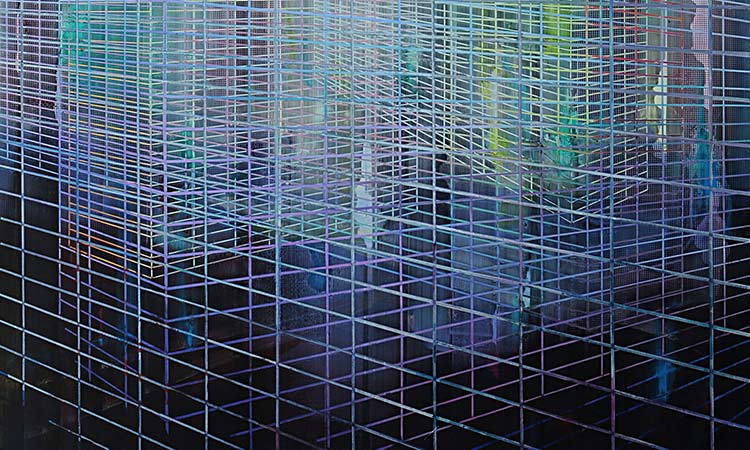 Ouadahi takes as his subject matter the built environment of urban alienation — sterile modernist public housing developments, wire netting and underground passageways. Since late 2018 onwards, he has sought to rebuild his method of painting, but without leaving his general concept. In his abstract sketches and painterly experiments of 2017, he attempts to shatter his previous practice. Ouadahi was raised in Algeria and studied at the École Supérieure des Beaux-Arts d’Alger, before enrolling and subsequently graduating from the Kunstakademie Düsseldorf, Germany.

In Unfolded (2020), Yu-Xin explores the relationship between visual language and sensory perception, constructing a delicate alternation of horizons, within which varying distances elicit different modes of observation. The layered surface and multiple perspectives generate a dynamic composition, an in-between place, which allows the artist to switch between figuration and abstraction, incorporating aspects of still-life, graphs, digital motifs and fragments of text and memory. Unfolded presents a repeated waterfall motif, horizontally collaged into a new landscape. The paint used to depict the ground/earth/rock are made from earth pigment mixed with clam clamshell powder (a common pigment used in Chinese painting for white). Yu-Xin holds a MFA in Fine Arts from Slade School of Fine Art UCL.

A group of Miniatures by Pouyan, made after a unique and highly unusual manuscript in the Bibliotheque Nationale in Paris, continue a series began in 2008, other examples of which are in The Metropolitan Museum of Art, New York, The British Museum, London and the Museum of Fine Arts, Houston. They reproduce the illustrated pages of an illuminated Mi’rajnama (Ascent of the Prophet, PBUH) manuscript made in Timurid Herat and written in the Chaghatay Turkish language in an Uighur script — as culturally diverse as was possible in the 15th century.

Pouyan digitally and manually manipulates the images to remove the figures and their attributes. Without their protagonists, what is left are arresting monochrome skyscapes of saturated blue, resembling colour field paintings in miniature. Pouyan has an MFA in Integrated Practices and New Forms at Pratt Institute, New York, and has an MFA in Painting from the Tehran University of Art. Finally, in Sky And Ocean And Everything In Between (2020) Emirati artist Al Mazrou investigates the perception of colour and the irony between literal meaning and spontaneous perceptions in art.

Two blue resin blocks displayed on the floor, minimal in their aesthetics and poetic in their meaning, attempt to give form, thought and sensation. Similarly, Despite The Weather (2020) questions the meaning behind what one sees. By using cyanotypes, Al Mazrou manipulates light to superimpose numbers, emphasising the paradox between intangible concepts such as time and the rigid numerical constructs that represent them. Al Mazrou received her MFA in 2014 at the Chelsea College of Fine Art, University of the Arts, London, where she was awarded the prestigious MFA Student Prize.