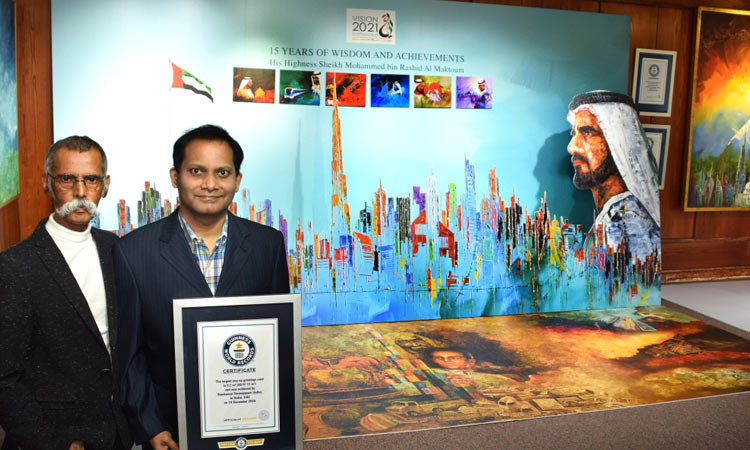 Ramkumar Sarangapani (R), with Akbar Saheb, the artist who designed the card.

Dubai resident and currently the holder of the highest number of Guinness World Records in the country, Ramkumar Sarangapani, achieves the distinction of breaking the World’s Largest Pop up Greetings Card record on the occasion of 15th Accession Day of His Highness Sheikh Mohammed Bin Rashid, Vice-President and Prime Minister of the UAE and Ruler of Dubai, to commemorate the day.

This is Ramkumar’s 19th world record which makes him the highest holder presently not only in the region but also in India. The World’s largest Pop up Greetings Card is 100 times bigger than the regular pop up greetings card and features a collage of Sheikh Mohammed’s paintings created by celebrated Dubai based artist Akbar Saheb over the last 25 years.

With a closed surface area of 8.20 square metres, it broke the previous record of 6.729 square metres set by Hong Kong. At 4 metres long and 2.05 metres wide, the card’s outer cover is the winning bid of Expo 2020 painting created by Saheb in 2013 whereas the inside of the card and pop up is a collage of various paintings of His Highness Sheikh Mohammed made by him since 1996.

Commenting on the new record, Ramkumar Sarangapani said, “I had been working on this for the last six months and was waiting for the most opportune time to break this record to make it very special for the nation. And there couldn’t have been a more auspicious occasion than the 15th Accession Day of His Highness Sheikh Mohammed Bin Rashid while I also dedicate this to the 50th anniversary year of UAE’s formation.”

“The visionary Ruler of Dubai is an inspiration and motivation for many across the world and I am proud to be living in a place like Dubai which is considered amongst the best cities in the world. I salute the spirit of the nation which is always determined to achieve newer milestones thus encouraging its people to think big and strive for the best.”

To bring the idea to fruition, Ramkumar connected with Akbar Saheb, famous for his royal paintings featuring UAE’s Rulers and requested his permission to use the paintings for designing the World’s largest Pop up Greetings card. To his surprise, Saheb not only accepted the proposal but even agreed to personally design the entire card, which made it extraordinary.

"The city and the Ruler of Dubai are a force to reckon with. His highness holds a special place in our hearts while the world looks up to him for his visionary leadership, innovation and unique outlook hence I always felt the need to show my gratitude, perhaps this is the way I can honour both the city and our Ruler in my own small way. If one day, I do get the opportunity, I would like to gift this card to His Highness personally,” added Ramkumar.

The Largest Pop up Greetings card will be exhibited at Numisbing Art Gallery, Doha centre, Al Maktoum Road, Dubai along with the Largest Electronic Greetings card which was created on the occasion of 49th National day of UAE.

The entry is free but restricted to 7 people at a particular time to ensure COVID-19 precautionary measures. 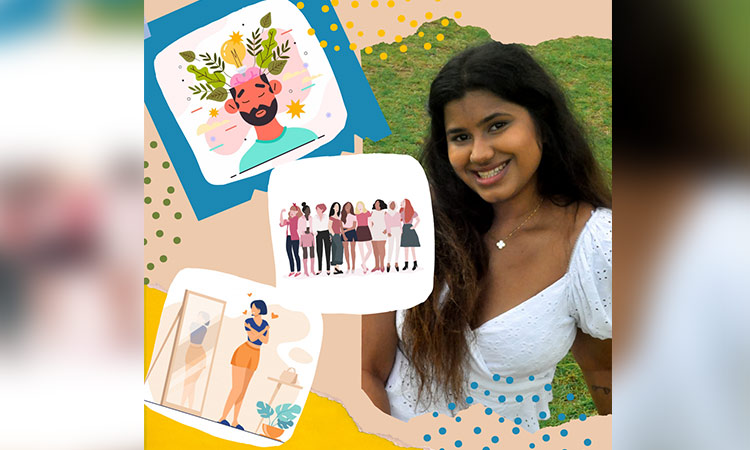 "Art was a way that I could communicate to everybody and is universal. So, it became my language," she said. Her daily "routine" itself reflects an eclectic mix of the east and the west.