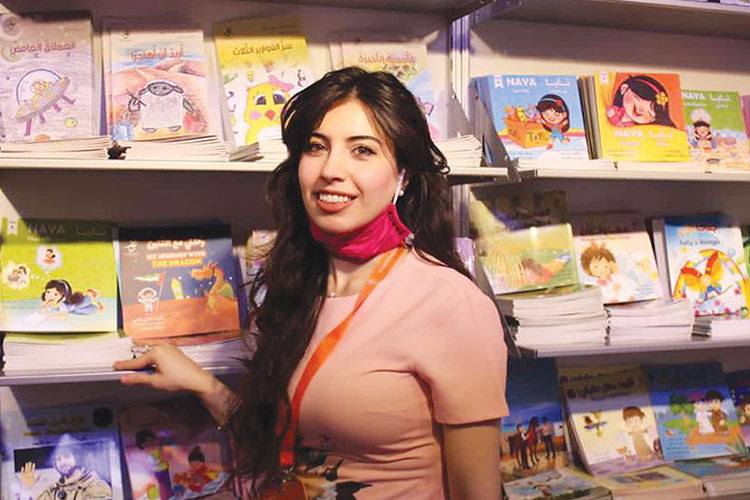 The Palestinian-Canadian UAE-based author Nour Arab, Founder and Owner of Nour Publishing and Member of Emirates Publishers Association, has broken all records in the children’s literature field by creating a new methodology in her writings—a methodology that strengthens and reflects the bond between a mother and her child through illustrating personal stories about her own children in most of her published works.

The talented author who is in her early 30’s was also awarded the ‘Youngest Arab Female Publisher’ in 2019 after she touched the hearts of little children around the world through publishing her first edition of ‘Samsoom Loves’ series.

The series was inspired by her three-year-old boy who at that time drew her attention through his first formed phrases and the way he looked at the world as a child.

The loving-mother inside of Nour Arab felt inspired to see the world through the curious eyes of children, and she successfully managed to reflect the beautiful details that take place in every family home with little children through her stories.

Her bilingual storybooks have contributed to the success of her publication worldwide, as she desired to reach various nationalities, as well as become an inspiration for other children’s authors who wish to share personal experiences.

‘Samsoom Loves’ series was published in six different editions back in 2017; giving the young author a motive to continue her work after its huge success, leading to the publishing of her second series ‘Naya’ in 2018 which was inspired by her three-year-old daughter.

The efforts Nour put in her writings has paid off, after the collaboration of several distinguished authors over the years with her publishing house led to the publishing of over 60 books so far.

Nour’s latest works ‘Fahood’ series was showcased during this year’s Sharjah International Book Fair, as she wanted to present an Emirati character to the children all over the world, reflecting the heartwarming traditions and values of Emirati children during the holy month of Ramadan.

Nour Arab has also come up with the idea of turning her published series into animated cartoons for children all over the globe to watch and enjoy, besides aspiring to have them adopted by schools as part of the curriculum, especially that they’re based on human values with the aim of linguistic and emotional development.