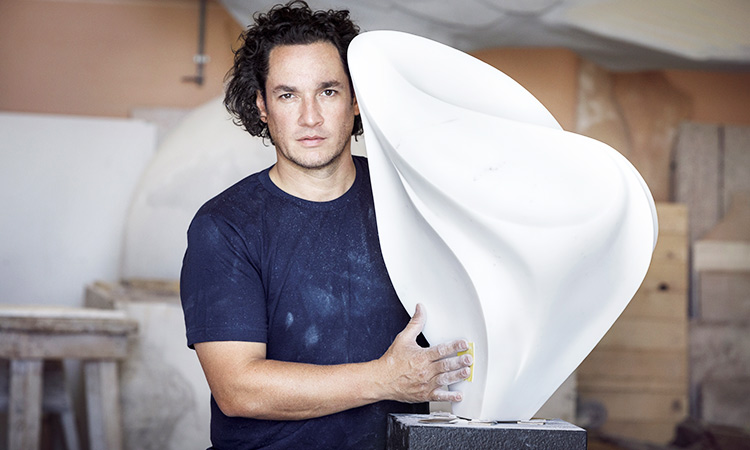 Gustavo Velez in his studio.

It is a double delight actually: along with the main exhibition, there is also a virtual online exhibition that can be viewed at Oblong website curated by Italian curator Susanna Campolonghi, which features fifteen artworks of Velez (October end to January end, 2021).

One of the most prominent artists from Medellin, Colombia, Vélez’s sculptural process is the result of the figurative artist’s interpretation, abstracted from the reality of the world.

He transforms matter into works that play between the figurative and the conceptual, between forms easily identifiable and others more abstract, full of movement, light, shadow and search of the infinite.

Entwining elegant lines, the thin, light sculptures depict his particular way of creating tri-dimensional shapes. From every angle, their forms are seamless and the lines are dynamic; their shapes change when light changes, giving the spectator an infinite, pleasant possibility of viewing the pieces.

Velez started acquiring knowledge of the arts in his hometown, then moved to Italy and continued his studies in the Lorenzo De Medici academy of Florence, Italy. He developed, experimented and mastered his technique of marble carving in his studio in Pietrasanta, Italy.

He is well aware of the paths to sculpting as he engages materials in order to shape his works. For the past twenty years, he has been committed to complex abstract forms in different media.

His quest for form in matter is akin to the way a poet fashions meaning from the flourishing, buzzing, confusion of language. Vélez’s works have the precision of poetry as well as its openness.

Although he works with different materials, he takes special pleasure in sculpting marble. Says he: “The medium I most appreciate and the one with which I coexist from day to day, is marble. That is why seventeen years ago I headed to Pietrasanta after completing my training in Florence. 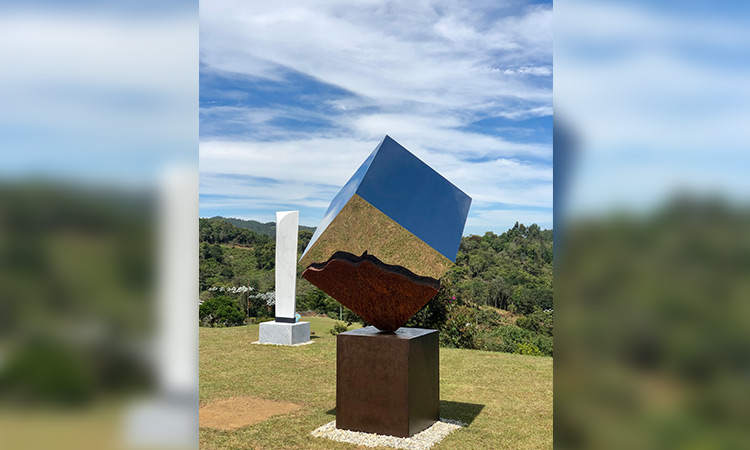 Gustavo Velez in his studio.

“I am passionate about sculpting marble, about extracting from it all its values, and attaining from it the transparency and movement that lie within it”.

It is the type of challenge that Leonardo da Vinci once engaged in when he reflected upon water, which he called the “vetturale di natura” (the vehicle of nature).

With his outstanding powers of observation, da Vinci drew the lines of flowing water. Vélez’s instinct is to focus on the flow without the representational component, and much like Constatin’s Brancusi’s Bird in Space (1919), he captures the soaring flight of the animal without wings.

Many of Vélez’s sculptures are a tribute to Brancusi (1876-1957), the Romanian artist from whose work he draws aesthetic lessons. Vélez says: “In Brancusi I discovered a reading of sculpture as rhythm and harmonious lines that impact space”.

Notwithstanding the similarities, it is the differences that define Vélez’s oeuvre. Vélez’s Infinita (White Carrara marble, 2007) does not need the colossal height of Brancusi’s The Endless Column (1938) in order to draw a line to connect earth and sky, finite matter and the infinity of space. Infinita achieves this by weaving into the marble a pattern that acts like a recursive function and a biomorphic suggestion of blooming.

He has exhibited his artworks throughout Asia and in art fairs in Japanese cities such as Tokyo and Iwaki. In China, he exhibited at the Zhengzhou Art Museum in Guan Xiang and in Korea, he hosted a monumental installation at the Art sculpture park of Seoul.

Oblong Contemporary Art Gallery’s mission is to create a successful global arena for culture and art. Mainly involved in promoting contemporary and modern art, operating both locally and on the international art platform, it is a place of cultural exchange, exhibiting quality artworks and giving a platform to artists from the region.

Additionally, Oblong hosts workshops, educational initiatives and a cross-cultural art exchange programme between the UAE and Pietrasanta, on the coast of northern Tuscany in Italy.  The gallery name was derived from the ‘oblong’ shape, which comes from three other shapes: a square, a circle and a rectangle. The founders of Oblong, Emanuela Venturini and Paola Marucci, have described the shape as a representation of their different backgrounds and characters. They have strong links to Pietrasanta, embodying the DNA of the historic city and its rich heritage.