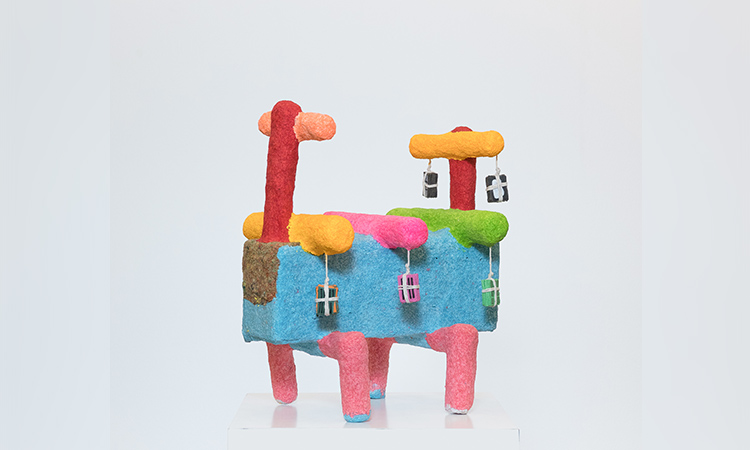 Mohamed Ahmed Ibrahim’s composition titled Lady Going to a Party in a Hurry.

Lawrie Shabibi, Dubai, has launched the new art season with a solo exhibition (Sept. 19 — Nov. 12) of Emirati artist Mohamed Ahmed Ibrahim. It is titled Memory Drum and comprises works produced mostly during Ibrahim’s time in isolation during lockdown in his Khorfakkan studio. It is the artist’s second solo at the gallery.

Two new bodies of work have emerged from six months of seclusion: a group of large paintings with plant-like forms (either trees or flowers) — his Boulevard and Flower series — and a group of sculptures that are either vaguely anthropomorphic or else resemble toys from earliest stages of childhood. Both bodies of work are seen through a minimalist lens and alternate between brightly-coloured and neutral hues.

The title of the show — Memory Drum — has several meanings. In psychology, there is a theory that unconscious neural patterns acquired from past experience are stored in the central nervous system in a kind of memory storage organ, analogous to a drum, such as that used to store music in the old-fashioned roll pianos.

It can also refer to the “drum memory” of early computers, a magnetic storage device widely used in these machines in the 1950s and the 1960s, forming the apparatus of their working memory.

For Ibrahim however, there is a further level of meaning, a theory of innateness in developmental psychology — that children have an inborn knowledge.

This knowledge, for the artist, is more important than that learnt later in the course of life. Although most people lose touch with it through acquired behaviour, Ibrahim is constantly aware of it. Especially so during this time of enforced isolation, which has forced him to go back deeper still into his “drum memory”. The new paintings, Flowers and Boulevards, are rooted in his previous semi-figural paintings of symbols. More plant-like than figure-like, both represent growth and are interconnected, yet on different scales.

The same forms become either flowers or towering trees, depending on context: the Flowers paintings are growing from schematic pots, while the Boulevard paintings recall aerial maps of cities or landscapes, with large trees lining roads or rivers. They may also be read as zoomed-in slides of organic matter viewed under a microscope. Play is central to Ibrahim’s practice. With much of his three-dimensional work in papier-maché, before making his sculptures, he may play for weeks with his materials, mixing in leaves, grass, tea, coffee or tobacco into his paper mix, to produce nuanced natural and neutral tones.

Although they may seem at first painted, Ibrahim’s brightly coloured sculptures actually contain no paint, with the colours coming from the shredded coloured paper itself. 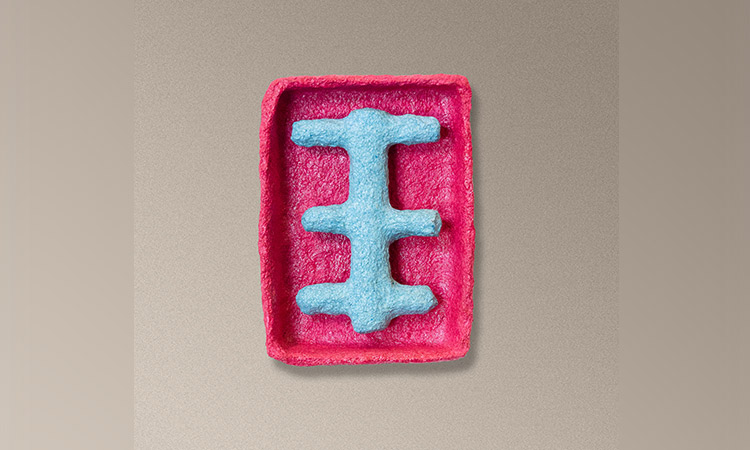 Some of the free-standing sculptures evoke humanoid figures and are named as such - Dancer Contessa, for example. The smaller wall-based sculptures have the feel of children’s toys — either rattles or those that hang over babies’ cribs.

The change in emphasis toward semi-figural, both in painting and in sculpture, is a clear development in Ibrahim’s practice, being balanced by tendencies that remain: the repetition of mark-making and forms in the paintings; the automatic almost subconscious object-making of the sculptures analogous to organic growth; the disregard of scale, and the vibrancy of colour and texture that suffuse both.

Ibrahim (b. 1962, Khorfakkan, UAE) is part of the UAE’s first generation of contemporary artists from the 1980s and 2000s, an avant-garde that included Hassan Sharif, Abdullah Al Saadi, Hussein Sharif and Mohammed Kazem.

In March 2017, Elements, a survey of works spanning three decades of practice, was presented at the Sharjah Art Foundation curated by Hoor Al Qasimi.  The Space between the Eyelid and the Eyeball was his first solo at Lawrie Shabibi (2019).

Lawrie Shabibi was founded in 2010 and opened its doors in 2011 in Alserkal Avenue, Dubai. It supports the long-term development of the careers of young international contemporary artists, with a focus on those from the Middle East and North Africa, and more recently diasporic artists within the UK.

It has opened a London space with a solo exhibition of renowned Moroccan modernist, Mohamed Melehi.