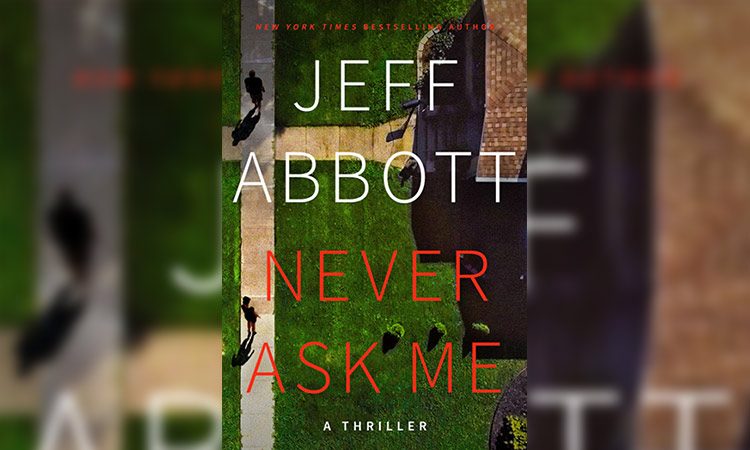 Secrets seep through the affluent Lakehaven neighbourhood of Austin, Texas, where juggling volunteer duties, shuffling teenagers and scheduling coffee meet-ups appear to be the most pressing concerns in this astute family drama that cleverly evolves into an intricate plot in “Never Ask Me,” Jeff Abbott’s 20th novel and his seventh stand-alone.

But those secrets become almost insurmountable to Iris and Kyle Pollitt and their much-loved teenage children, Julia and Grant, after their neighbour Danielle Roberts is murdered.

Danielle’s body is found in the neighbourhood park by her son, Ned Frimpong and Julia while the teens are playing an early morning digital game.

An adoption consultant, Danielle, had facilitated many neighbourhood couples seeking international adoptions, including the Pollitts who adopted Grant from a St. Petersburg, Russia, orphanage when he was a baby.

Tension quickly builds as “Never Ask Me” delves into the myriad ways that the neighbours are interlocked.

Julia is drawn into Ned’s “harmless” prescription pill drug business while Grant receives emails that tell him his parents are lying to him.

Kyle is beaten up after sneaking into Danielle’s home. Iris begins to doubt each of her family members and neighbours while keeping her own agenda quiet.

The suspense heightens as the action smoothly shifts from the current murder investigation and the Pollitts’ lives to an adoption journal that Iris kept during Grant’s complicated adoption, which had far-reaching effects.

What makes a family and the sacrifices one makes for each other are the heart of “Never Ask Me.”

Abbott’s sense of realistic situations extends when he takes “Never Ask Me” beyond family issues with a series of intelligent twists.

Abbott’s affinity at capturing sharp characters and the details of daily life that, taken out of context, can be frightening shines in the superb “Never Ask Me.”