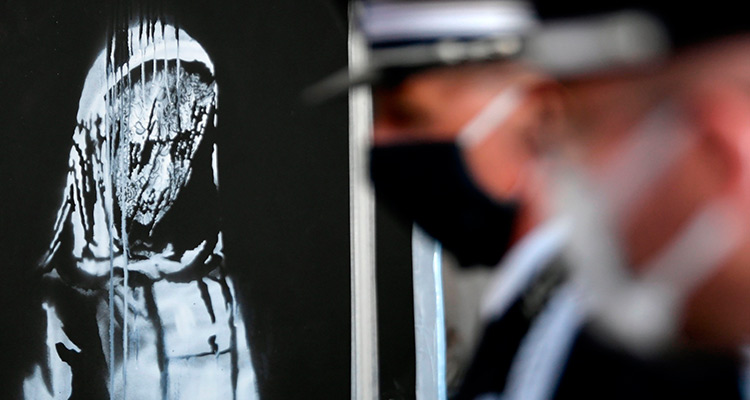 Italian and French police officers stand next to the artwork by street artist Banksy.

Rome returned a stolen Banksy artwork to France on Tuesday after the famed street artist's homage to the victims of the 2015 Paris attacks was found in Italy.

The image of a young girl in mourning was painted with stencil and white paint on an emergency door of the Bataclan concert hall in Paris where Daesh gunmen killed 90 people nearly five years ago.

It was found in the attic of an abandoned farmhouse in the central Italian region of Abruzzo last month.

The chief prosecutor of L'Aquila, the capital of Abruzzo, and the head of Italy's police in charge of cultural heritage handed over the work to France's ambassador Christian Masset at a Bastille Day ceremony.

The artwork was then displayed inside the French embassy in Rome's Farnese Palace. 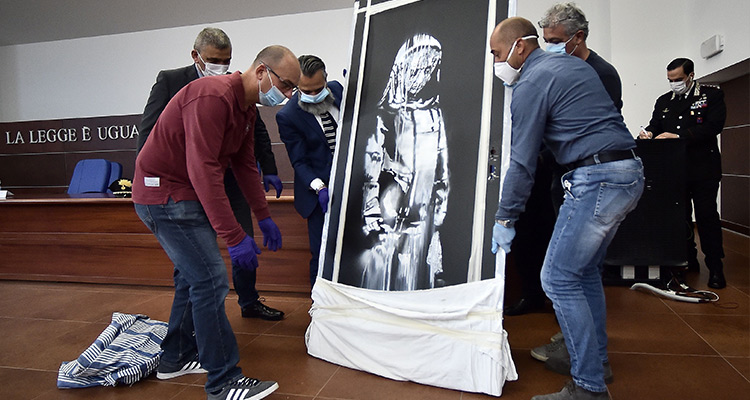 Men unveil a piece of art attributed to Banksy, that was stolen at the Bataclan in Paris in 2019.

Masset said at the handover ceremony that it was through the emergency door "by which numerous people escaped and are alive today."

"It has a dual significance because it reminds us of the 90 victims... and it was a witness to the massacre" at the Bataclan, he added.

The date of the artwork's return to France has not yet been disclosed.

Italian news agency AGI reported that it could be exhibited at the UNESCO headquarters in Paris, a claim not immediately confirmed by the UN cultural agency.

At auction, works by the artist -- who keeps his identity secret -- have sold for more than $1 million. 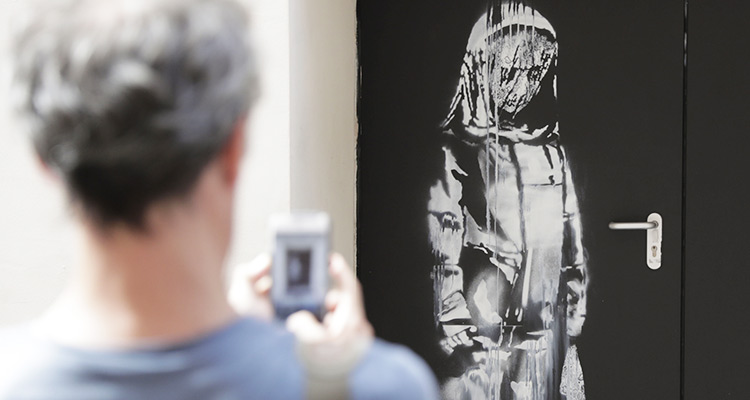 A man takes a photograph of a recent artwork by street artist Banksy in Paris.

In January last year, hooded thieves managed to nab the Bataclan work by cutting through the metal door of the club, a scene captured on video by surveillance cameras.

Last month, six people were arrested in France over the theft. Two were charged with robbery in an organised gang and the other four with receiving stolen goods.

However Italy's AGI has reported that a total of eight people have been arrested, including two French-born Italian suspects, and that a suspected accomplice remains on the run.

Banksy, one of the world's most highly regarded contemporary artists, blitzed Paris during a whirlwind trip in 2018.

The Bataclan door is not the only of his works to have been stolen in the French capital, some of which have since been recovered.

Others include a mural of a businessman in a suit offering a dog a bone, having just sawn the animal's leg off, and an image of a masked rat wielding a box cutter, which disappeared from outside the Pompidou Centre.

Fans have covered some of his Paris street art with Plexiglass to protect them.

The artist is known to shine a spotlight on social issues such as migration and racism.

In recent weeks, he has posted on his Instagram account a drawing showing a lit candle setting fire to the American flag above a picture of a black man, in homage to George Floyd, the US man whose death in police custody ignited protests across the country.

Banksy has also posted a drawing of people pulling down a statue, a reference to attacks on monuments or statues of historical figures linked to slavery or colonisation.