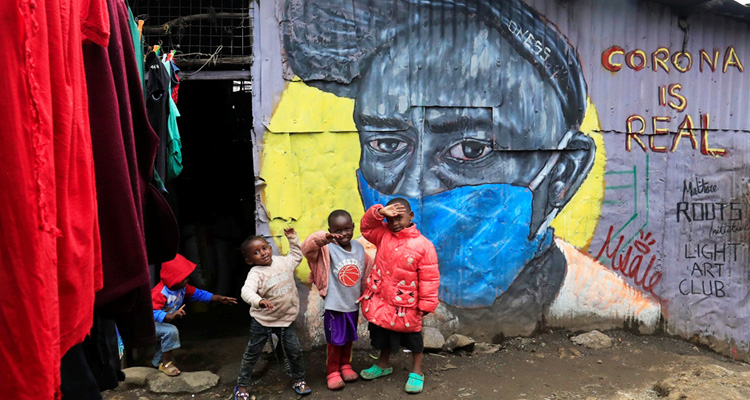 Children pose in front of a graffti made by artists of the Mathare Roots's youth group.

A six-foot image of a sad-eyed man, baseball cap askew and mask covering his nose and mouth is spray painted on a building in a Nairobi slum. Next to it are the words "Corona is real”.

There are six other pieces of graffiti like it around Mathare, the Kenyan capital’s second-largest slum. One urges people to wash their hands, another to use mobile money rather than germ-ridden cash.

All are public health messages to avoid the new coronavirus. As of Wednesday, Kenya had 303 confirmed cases of the disease and 14 deaths.

In a densely crowded settlement where social distancing and working from home are a pipe dream for most, the campaign is designed to teach people tangible ways in which they can protect themselves and their community from the coronavirus. 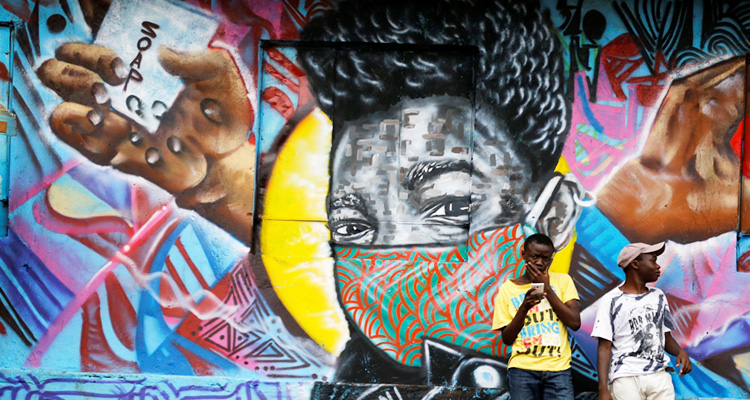 Residents stand in front of a graffiti by Mathare Roots's youth group advocating against the spread of the coronavirus.

Unlike the stuffy government news conferences on television, the campaign uses the voices of the people who live there.

The graffiti campaign is the brainchild of Antony Mwelu, a 24-year-old content creator with Light Art Club and graffiti artist Brian Musasia Wanyande.

Mwelu, who was born and raised in Mathare, realised he needed to do something after visiting the neighbourhood several weeks ago.

"I was sitting with the boys and I asked them 'Do you believe in corona?'. Most of them were like ‘No we don’t believe it’." 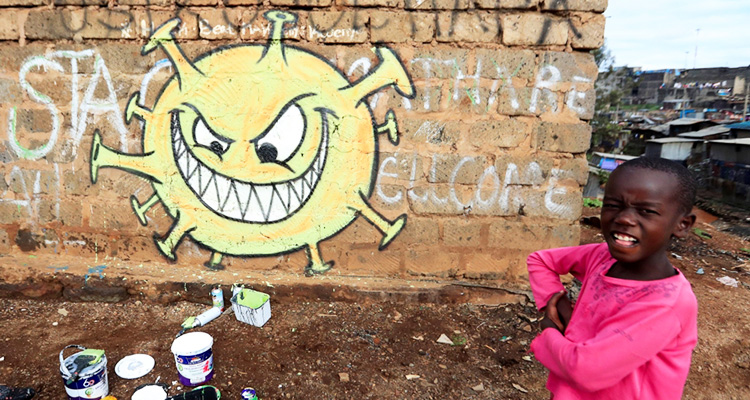 A child stands next to an advocacy graffiti by the Mathare Roots's youth group.

Wanyande had a similar experience.

"There’s a lot of misinformation going around,” Wanyande said. "And some of the real information has been given out in difficult English words.”

So, Wanyande said, he saw a need not only for catchy images but also accessible language to get the message across. Some of the graffiti is in Sheng, a local slang.

Mathare residents - who might number as many as half a million, according to the Mathare Foundation - have taken to the new images.

As Wanyande painted the pieces urging people to use mobile money - which included a larger-than-life image of a grinning man leaning against his motorbike taxi and a woman in front of her street-side banana stall - a crowd gathered. 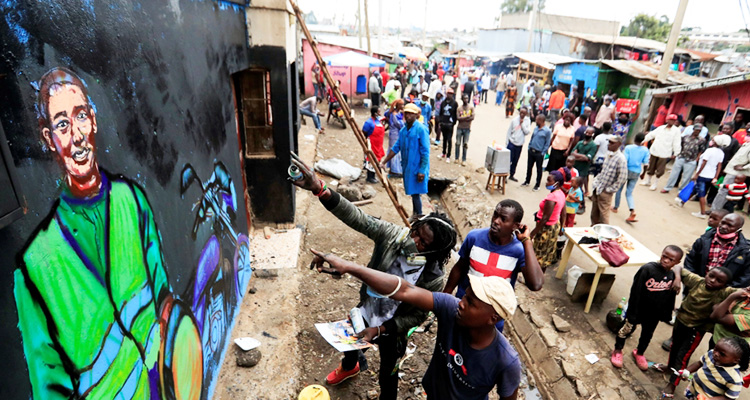 Residents watch as artists from the Mathare Roots's youth group paint an advocacy graffiti against coronavirus.

Dozens of residents ogled the art, with some squinting into their smartphones to take pictures.

The team includes and employs residents, too. Wanyande - who is well-known in Nairobi graffiti circles - has worked with up-and-coming Mathare artists on several pieces.

Other people have been hired to help in other ways, including with security, Mwelu said. The cash they can earn is badly needed as other casual labour dries up.

For now, the project is self-funded. Mwelu’s team is using money made on corporate campaigns.

"For the purpose and the people, rather than the profit," he said.