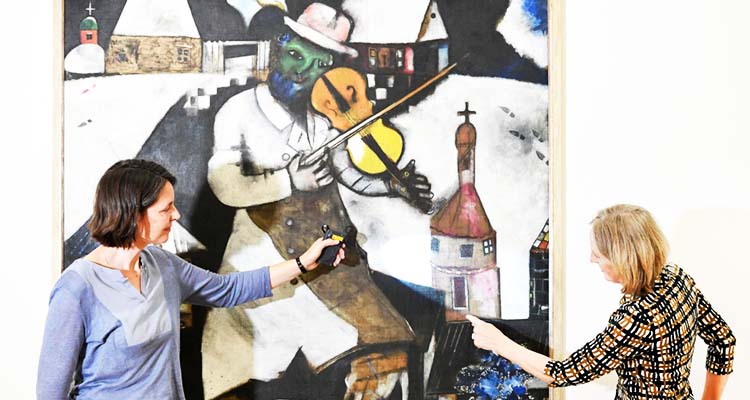 A collection of Marc Chagall's artwork is seen in the conservation atelier.

He was also so poor early on that his famed 1912 work "Fiddler" - a picture of a violinist dancing on a rooftop - was painted on a tablecloth when Chagall was a struggling Jewish immigrant in Paris.

The checkered pattern of the cloth is clearly visible in parts of the painting where the paint is thin, they said.

"He had so little money that he bought canvases from flea markets, you know he painted on any canvas he got his hands on," said Meta Chavannes, a conservator at Amsterdam's Stedelijk Museum. "So a bed sheet, or a night shirt, even a tablecloth."

Chief restorer Sandra Weerdenburg speaks about a study on a collection of Marc Chagall's artwork.

Conservator Madeleine Bisschoff speaks about a study on a collection of Marc Chagall's artwork.

Paintings of Marc Chagall are shown in the gallery of the Stedelijk Museum in Amsterdam.

The discoveries were made by researchers who spent five years studying the museum's large collection of works by Chagall.

Co-conservator Madeleine Bisschoff said it was typical of Chagall's work that much of his focus - the contrasting colours that give his paintings vibrancy - was concentrated in one or two key areas of a painting with intense detail, while other parts were sparse or even bare.

Scans showed those central parts - such as the woman and child in the 1913 "Pregnant Woman" - usually remained unchanged as Chagall worked. Details at the edges such as cows, houses and faces, had been tinkered with, moved or redone.

Chagall, who was born in 1887 in a village in what is now Belarus, left for Paris in 1910, weathered World War I in Russia, returned to Paris and then fled World War II for New York in the 1940s, before returning to France and working until his death in 1985.