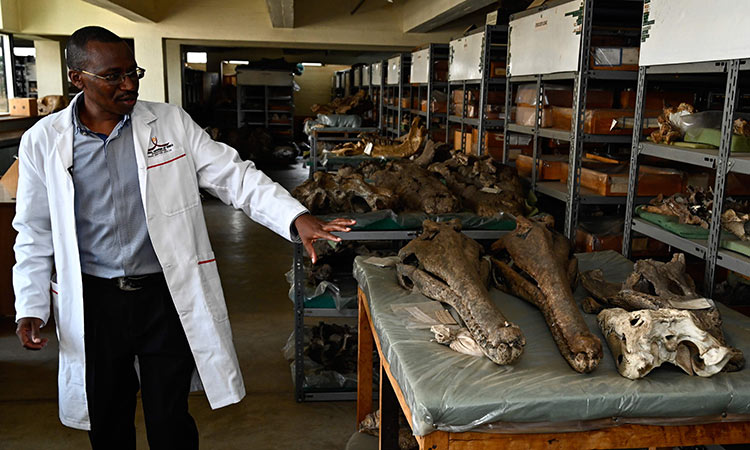 The only hint that something extraordinary lay inside the plain wooden drawer in an unassuming office behind Nairobi National Museum was a handwritten note stuck to the front: "Pull Carefully".

Inside, a monstrous jawbone with colossal fangs grinned from a bed of tattered foam -- the only known remains of a prehistoric mega-carnivore, larger than a polar bear, that researchers only this year declared a new species.

"This is one-of-a-kind," said Kenyan paleontologist Job Kibii, holding up the 23-million-year-old bones of the newly-discovered giant, Simbakubwa kutokaafrika, whose unveiling made headlines around the world.

But the remarkable fossils were not unearthed this year, or even this decade. They weren't even found this century. 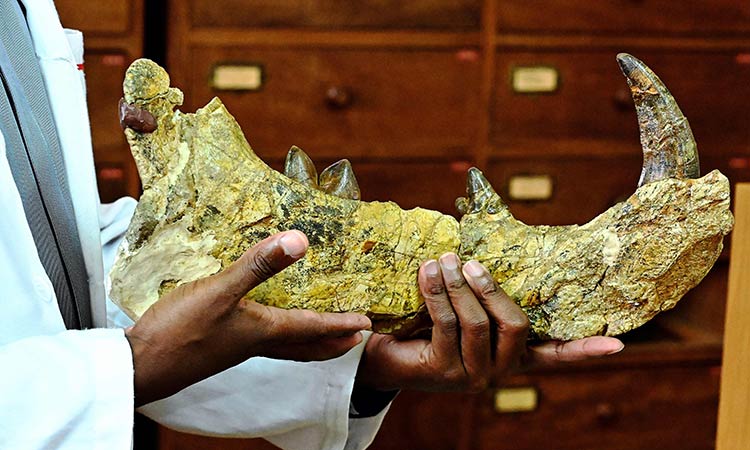 Job Kibii holds a piece of bones of the newly-discovered giant 'simbakubwa kutokaafrika' (big lion from Africa) in Nairobi. AFP

For nearly 40 years, the specimens — proof of the existence of Africa's largest-ever predator, a 1,500 kilogramme (3,300-pound) meat eater that dwarfed later hunters like lions — lived in a nondescript drawer in downtown Nairobi.

Museum staff knew the bones were something special -- they just didn't know what exactly. A source of intrigue, dusted off on occasion for guests, Simbakubwa lay in wait, largely forgotten.

How did these fossils, first excavated on a dig in western Kenya in the early 1980s, go unrecognised for so long?

Kibii -- who presides over the National Museums of Kenya's paleontology department, a collection unrivalled in East Africa and one of the world's great fossil treasuries -- has a pretty good idea.

"We have tonnes and tonnes of specimens... that haven't been analysed," he told the media.

"Definitely there are things waiting to be discovered."

The main wing has changed little since legendary paleoanthropologist Louis Leakey first started stockpiling his finds there in the early 1960s.

A card-based filing system is still used to find a specific fossil among the trove, the entries written by hand.

But the collection has grown exponentially, faster than Kibii and his team can keep up.

"We've run out of space," said Kibii, pausing between dusty archival shelves crammed floor to ceiling with finds, dating back more than half a century.

"In this section alone, we have more than a million specimens."

Gigantic skulls of ancient crocodiles compete for space with a bygone species of horned giraffe.

Nearby, the behemoth tusks of an early African elephant take up valuable real estate. 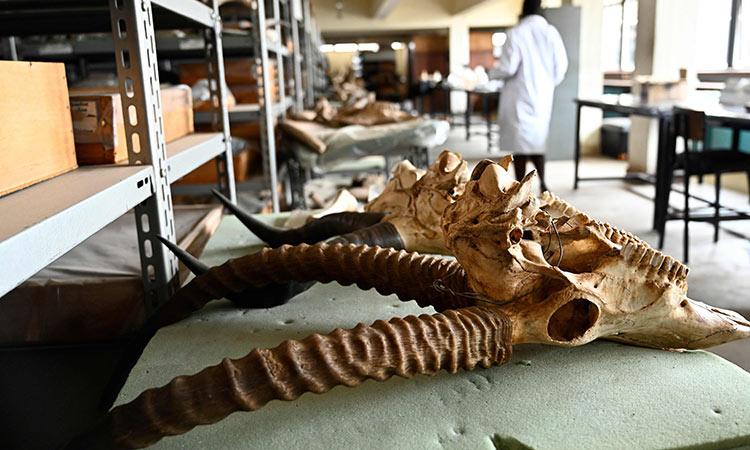 This picture shows fossils of different species displayed at the paleontology department of the Nairobi National Museum. AFP

Even the windowsills are littered with the petrified remains of all manner of weird and wonderful creatures.

Between 7,000 and 10,000 new fossils arrive at the lab every year, Kibii says, overwhelming his 15 staff who must painstakingly clean and log each specimen.

By law, fossils uncovered in Kenya must go to the museum for "accessioning" -- the process of labelling, recording and storing for future generations.

The backlog is enormous.

In a dark room, a lone staffer in a protective mask blasts away rock from fossil using an air-powered brush, as Kenyan pop tunes crackle through an old radio.

Outside the door, metal chests sent from dig sites filled to the brim await his magic touch -- literally years of work stretching before him.

If a specific expert is not on hand to identify a specimen, things can get wrongly categorised or waylaid.

In some cases, they're sent to the dreaded "waiting area", where faded cardboard boxes, sagging with unknown and abandoned fossils, gather dust.

"We have fossils from the 1980s that have not been accessioned," said collections manager Francis Muchemi, chipping away at a giant elephant molar.

Thought to be a type of hyena, it was filed away in a backroom and unstudied for decades, until stumbled upon by American researchers.

Specific finds unearthed at one of Kenya's many digs by researchers writing academic papers are given priority and fast-tracked for assessment by the museum.

Even today though, the museum lacks specialists and resources.

Kibii is one of just seven paleontologists in Kenya. He trained in South Africa because there was no course available at home.

"It's important because Kenya is the cradle of human evolution," said Muchemi, who learned his skills on the job.

"We have very few Kenyans doing this job. Ninety-nine percent of the people who work here are foreign."

"This one has been in the ground for millions of years. What are you saving it from?" he said, of the prevailing attitude to the science.

He hopes to acquire collapsable shelves to create space in the collection.

Even better, a micro-CT scanner -- a powerful tool driving breakthroughs in the world of paleontology -- would allow a fresh look at the museum's most-forgotten corners.

"I always wonder what lies in there on some of these shelves," Kibii said.

"Simbakubwa is telling a new story. What if, among these thousands, we have 10, 20, new stories that are lying, waiting to be told? That's always the mystery."