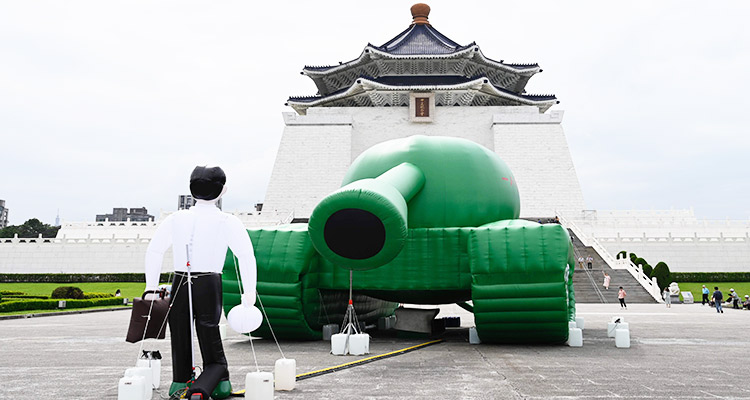 An artwork of Tank Man by dissident Chinese artist Baidiucao is on display.

The photograph of a man in a white shirt standing in the path of the tanks has become one of the most recognised images of the twentieth century, and a symbol of peaceful protest.

The balloons are on display in the Taiwanese capital Taipei, by the Chiang Kai-Shek Memorial Hall, one of Taiwan's most famous landmarks.

Mention of the June 4, 1989, crackdown is heavily censored in Chinese news and social media. The ruling Communist Party has never declared how many protesters were killed in and around Tiananmen Square.

The balloons are on display in the Taiwanese capital Taipei.

Visitors to the memorial hall posed for photographs with the balloons.

The artwork marks 30 years since China's bloody crackdown on the pro-democracy movement.

"This thing has already been washed away by (China's) authoritarian political view," she added, noting Hong Kong and Taiwan are commemorating the event.

Visitors to the memorial hall posed for photographs with the balloons.

"Both the place and timing to put this up require courage, there are so many tourists from China coming to Chiang Kai-Shek Memorial Hall," said Su Yung-Hua, a 21-year-old student.

She called the artwork a "statement against the Chinese government".

"I think it is very brave to put it here and I am quite concerned that there could be someone who pops it with a needle at night."