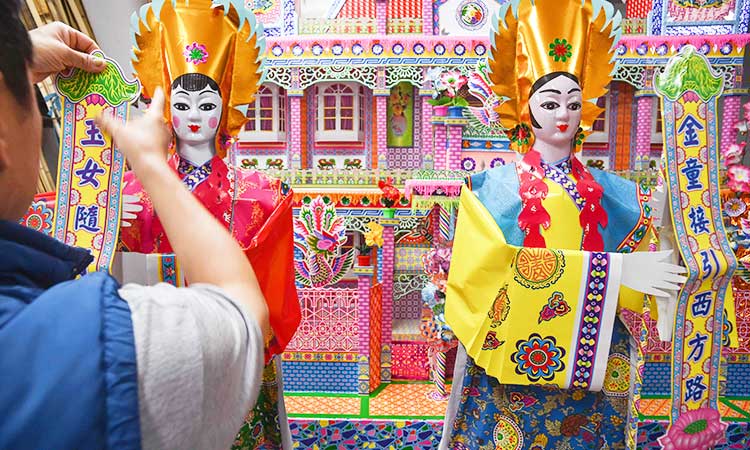 A traditional-style paper model is used as an offering for the dead.

TAIPEI: From a modern summer villa with an outdoor pool to a fully equipped film studio or a casino, paper model makers in Taiwan are ensuring the dead enjoy an eternity of luxury.

Across the global Chinese diaspora, burning paper offerings has long been seen as a way to send ancestors gifts that they can use in the afterlife.

In recent years, traditional paper incarnations of money and gold bars have given way to the more modern -- paper iPads and mobile phones, washing machines, cars, televisions and credit cards.

But a handful of paper model makers in Taiwan are taking the art to a new level and crafting offerings that bestow on the dead the kind of trappings only experienced by the truly rich and famous in the land of the living.

A figure behind a 'villa' paper model, used as an offering for the dead, during a ceremony in Shanshia district in New Taipei City.

Yean Han, director of Skea, displaying a 'plane' paper model, used as an offering for the dead, at her workshop.

A man displaying a 'laptop' paper model, used as an offering for the dead.

"We believe that people will move on to another world after they die," explained Taipei businessman Chen Shu-hsuan, as he attended his uncle's funeral.

"We hope he would live a good afterlife in that world so we prepare a paper house and a lot of paper money so he could have the means to live well," Chen said.

The practice of burning offerings originated in Taoism, a leading faith in Taiwan, with the gifts primarily offered at funerals, death anniversaries and during key festivals when ancestors are honoured.

Chen said his family intended to burn more offerings for his uncle on Friday's Tomb Sweeping Festival when ethnic Chinese traditionally visit and tidy the graves of their ancestors to pay respect.

Model maker Lin Chien-chiang, 55, has been in the business for 30 years and says consumer demands are becoming increasingly complex.

"We are making changes to produce smaller and more intricate models to better suit the times. And using more environmentally friendly materials.

These include miniature banks, a space shuttle, and even an entertainment complex featuring a casino and a hostess club complete with ladies dressed in figure-hugging outfits.

His most popular offerings include realistic miniature gadgets such as smartphones and laptops to a "mini vault" containing a wad of US dollars, gold bars and credit cards. 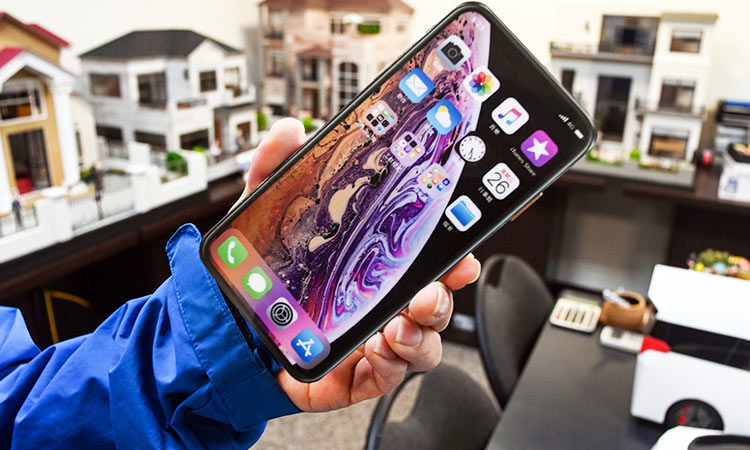 A man displaying a 'smartphone' paper model, used as an offering for the dead.

Dead but not forgotten

Veteran craftsman Chiang Yueh-lun, 51, recalled his most unique order: A lifesize paper double of a young man killed in a car crash to be placed on top of the badly damaged body inside his casket.

"Some people think our business is ill luck because it has to do with the dead but I believe we are accumulating good karma for the services we provide," he said.

Han Yean, 40, started her business Skea (Spectacular Kind of Elysium Accessories) after she could not find an ideal paper house for her grandfather when he passed away 12 years ago.

She eventually made a paper villa with an outdoor hot spring which her grandfather had loved.

"I hope western societies will understand our practice," she said. "Paper offerings are not something scary. I want to make beautiful items that make people feel their loved ones are living a better life in heaven.

Han believes that the offerings not only serve as a tribute to the deceased but also help the living cope with loss.

"We can continue to express our love," Han says of the paper gifts, adding: "We are not forgetting our loved ones and they are living in our hearts."

Han offers a variety of handcrafted everyday items such as paper clothes, bags and cosmetics priced from around $100.

She will display some of her designs at an exhibition on Taiwan's funeral culture in Paris from June, including a dim sum restaurant based on a product she previously made for a customer.