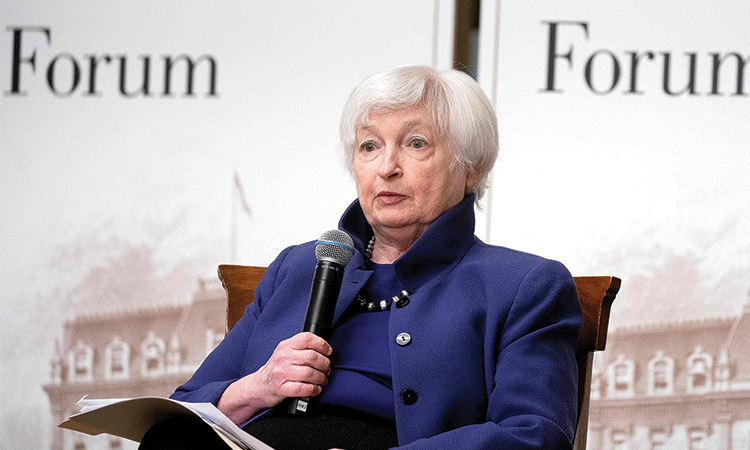 Janet Yellen speaks during the Freedman’s Bank Forum at the US Treasury Department in Washington on Tuesday. Agence France-Presse

Global stocks rallied  on Tuesday and the dollar dipped as weak US data sparked hopes the Federal Reserve could ease its interest-rate hiking plans.

Wall Street stocks snapped higher at the open, with the Dow climbing 1.3 per cent.

“Weaker-than-expected manufacturing data from the US was taken as a signal that rising interest rates may be having some effect on cooling demand for goods,” said Interactive Investor analyst Richard Hunter.

“This in turn led to hopes of a Federal Reserve pivot, even though the spectre of inflation remains firmly at the top of their stated to-do list.”

The Fed and other central banks across the world have raised interest rates in efforts to tame runaway inflation, but the monetary tightening has raised fears that it could plunge countries into recession.

Those concerns have fed into sharp drops in stocks in recent weeks, as have expectations that the Fed will have to raise interest rates by a couple more percentage points through much of next year to get on top of inflation.

But Wall Street had enjoyed a bumper start to the fourth quarter on Monday after data showed US manufacturing growth slowed more than expected in September to its weakest in more than two years.

The Institute for Supply Management said its manufacturing index dropped 1.9 points to 50.9 percent, just barely above the 50-percent threshold indicating expansion, as the prices index fell to the lowest in more than two years.

Eurozone manufacturing survey data out Monday showed a contraction on the back of the region’s ongoing energy crisis.

“The turnaround in risk appetite appears to have been driven by another deterioration in PMI surveys as traders speculate that such weakness could be a precursor to slower monetary tightening,” noted OANDA market analyst Craig Erlam.

Asian markets built on the Monday Wall Street surge. Tokyo and Seoul were among the leaders, despite news that North Korea had fired a missile over Japan for the first time since 2017.

Sydney soared 3.8 percent after the Reserve Bank of Australia lifted interest rates by less than expected.

Hong Kong and Shanghai were closed for holidays.

Investors will focus later this week on Friday’s all-important US jobs figures for the latest reading on the health of the world’s biggest economy.

“The specter of the September employment report on Friday, however, is still hanging out there as a potential spoiler,” said Briefing.com analyst Patrick O’Hare.

“By the same token, it could also provide more interest rate relief if it is on the weaker side of things,” he added.

Oil also continued to rise on expectations OPEC and other major producers will slash output this week, having become spooked by a plunge in the commodity on recession fears.

The 13 members of the Organization of the Petroleum Exporting Countries (OPEC), led by Riyadh, and their 10 allies headed by Moscow will hold Wednesday their first in-person meeting at the group’s headquarters in Vienna since March 2020.

The rally in equities came as the dollar weakened owing to lower expectations for US monetary tightening, with the pound also supported by the UK government’s decision to scrap a planned cut in the top rate of income tax.

The pound extended gains after breaking back above $1.13, having last Monday tanked to a record low $1.0350. The euro rose around one percent against the greenback.

Oil prices rose by about $3 a barrel on Tuesday on expectations of a large cut in crude output from the Opec+ producer group, and support from a weaker US dollar.

The Organization of the Petroleum Exporting Countries (Opec) and its allies, known as Opec+, look set to cut output when they meet on Wednesday. The move would squeeze supply in an oil market that energy company executives and analysts say is already tight due to healthy demand, a lack of investment and supply problems.

Sources from the group have said that Opec+, which includes Russia, is discussing output cuts in excess of 1 million barrels per day (bpd). Oil extended gains after Bloomberg reported that Opec+ was considering a 2 million bpd cut.

“We expect a substantial cut to be made, which will not only help to tighten the physical fundamentals but sends an important signal to the market,” Fitch Solutions said in a note.

Kuwait’s oil minister said Opec+ would make a suitable decision to guarantee energy supply and to serve the interests of producers and consumers.

OPEC+ has boosted output this year after record cuts put in place in 2020 when the pandemic slashed demand.

But in recent months, the group has failed to meet its planned output increases, missing in August by 3.6 million bpd.

The production target cut being considered is justified by the sharp decline in oil prices from recent highs, said Goldman Sachs, adding that this reinforced its bullish outlook on oil.

Also boosting oil prices, the U.S. dollar was headed for a fifth daily loss against a basket of currencies as investors speculated that the U.S. Federal Reserve might slow its interest rate hikes.

Uber made its Wall Street debut Friday, starting with an eye-popping $82 billion valuation in a milestone for the ride-hailing industry amid lingering doubts about its business model. Chief executive Dara Khosrowshahi and an Uber team rang the opening bell on the New York Stock Exchange