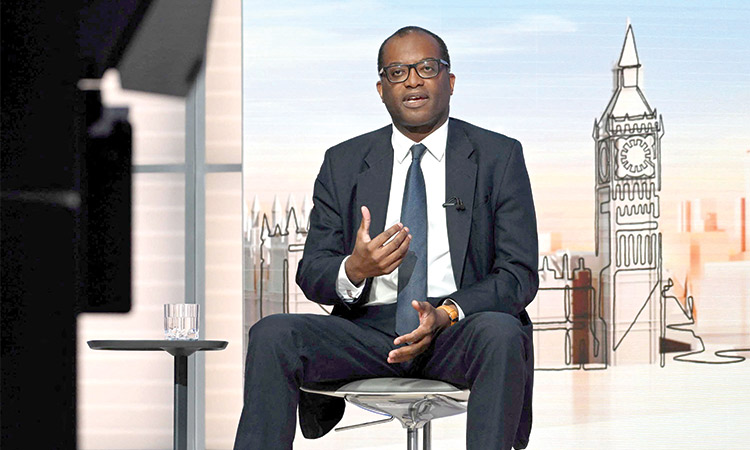 Kwasi Kwarteng attends an interview in Liverpool on Sunday. Reuters

British finance minister Kwasi Kwarteng said on Sunday that he was focused on boosting longer-term growth, not on short-term market moves, when challenged over the sharp fall in sterling and bond prices following his first fiscal statement.

Kwarteng scrapped the country’s top rate of income tax and cancelled a planned rise in corporate taxes — all on top of a hugely expensive plan to subsidise energy bills for households and businesses.

Sterling fell by more than 3% to its lowest since 1985 against the US dollar on Friday, and weakened against the euro and Japanese yen as well, while government bonds recorded their sharpest daily sell-off in decades.

On Sunday Kwarteng defended the measures as supporting the economy in response to the once-in-a-generation shocks of the COVID-19 pandemic and the rise in energy prices following Russia’s invasion of Ukraine.

“As chancellor of the exchequer, I don’t comment on market movements. What I am focused on is growing the economy and making sure that Britain is an attractive place to invest,” he told the BBC, defending the fiscal expansion despite the risks it fuels inflation further.

“There’s no way that a government... shouldn’t respond in a fiscally expansive way (to) support the economy, support our people through these two unprecedented shocks.”

Kwarteng said it was the responsibility of the Bank of England, and its governor Andrew Bailey, to deal with inflation.

The BoE raised interest rates by half a percentage point to 2.25% on Thursday, the day before Kwarteng announced his package.

“They’re tasked to deal with inflation... they don’t work in isolation, and that’s why I said that I will see the governor twice a week. And we share ideas, but of course, he’s completely independent,” Kwarteng said.

Asked if he was worried about the level of inflation, Kwarteng said “I’m confident that the Bank is dealing with that, but also what perplexed me was the fact that you don’t deal with people’s rising cost of living by taking more of their money in tax.” The United Kingdom’s new government outlined plans on last Friday to cut taxes and boost spending in an effort to bolster the faltering economy, but the high-risk moves sparked concerns that increased public borrowing will worsen a cost-of-living crisis and sent the British pound on its biggest one-day drop in 2 1/2 years.

He also said previously announced plans to cap soaring energy bills for homes and businesses would be financed through borrowing. Kwarteng offered few details on the costs of the program or its impact on the government’s own targets for reducing deficits and borrowing, but one independent analysis expected it to cost taxpayers 190 billion pounds ($207 billion) this fiscal year.

It triggered the pound’s biggest drop against the US dollar since March 18, 2020, when then-Prime Minister Boris Johnson announced the first nationwide lockdown to control the spread of COVID-19.