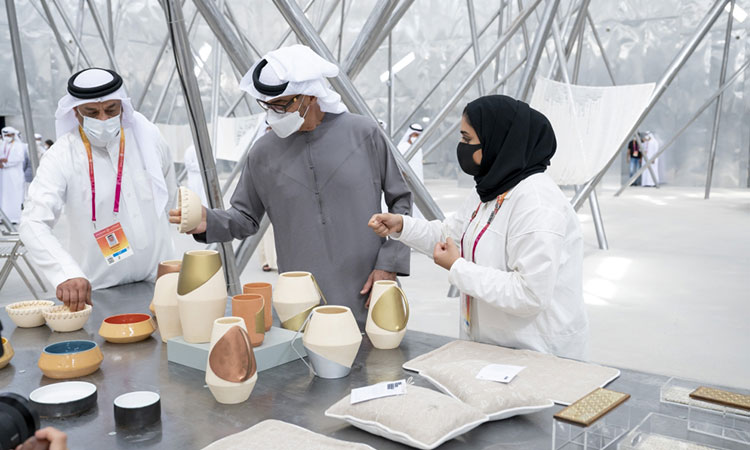 Sheikh Mohamed Bin Zayed Al Nahyan is being briefed during his visit to the Bahrain Pavilion at the Expo 2020 Dubai. WAM 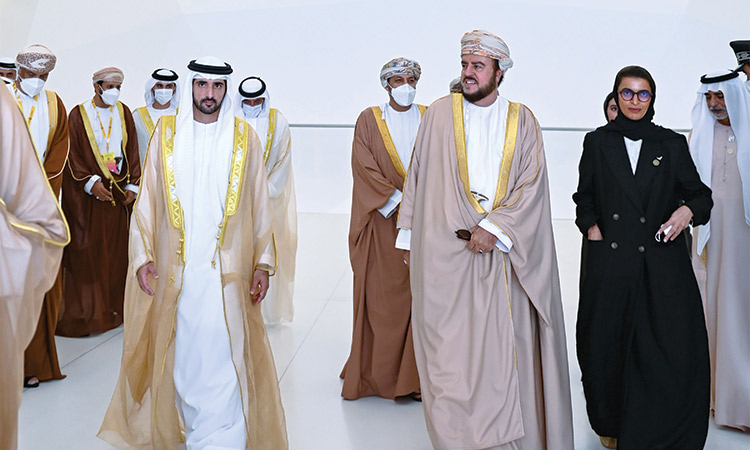 Bin Tariq is on a visit to the UAE to preside over the celebrations of the 51st National Day of Oman at the Omani Pavilion at Expo 2020 Dubai.

Sheikh Hamdan welcomed Bin Tariq and his accompanying delegation and discussed with him ways to enhance ties between the UAE and Oman. 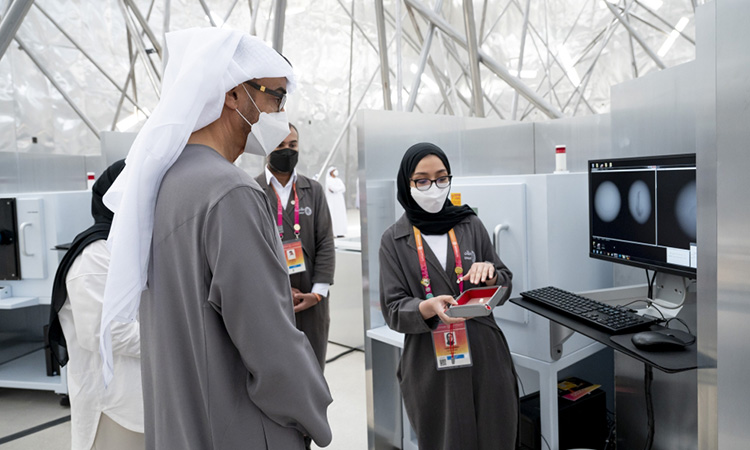 Sheikh Mohamed during his visit to Expo 2020 Dubai. WAM

The Bahrain Pavilion is characterised by its groundbreaking architectural design to reflect the Kingdom’s evolvement through trade, entrepreneurship and innovation.

Sheikh Mohamed was briefed on the display under the name ‘What do you see’, which focuses on the novelty of textile craft in Bahrain.

For his part, Sheikh Mohamed conveyed his greetings and best wishes to Sultan Haitham, extending his congratulations on the occasion of the 51st National Day of Oman and expressing his wishes for Oman and its brotherly people further progress and prosperity.

Sheikh Mohamed Bin Zayed and the Special Representative of the Sultan of Oman commended the strong brotherly relations between the UAE and the Sultanate of Oman, and reviewed ways to further develop them for the betterment of the two countries and peoples.

The meeting touched upon Expo 2020 Dubai, which showcases the cultures, history and civilisations of peoples, as well as shedding light on global projects, development experiences and innovative sustainability solutions to build a better future for all.

Bin Tariq congratulated the UAE for organising an exceptional Expo 2020 Dubai, noting that it brings significant benefits and opportunities to the region. He also praised the UAE pavilion and its exhibits which highlight the UAE’s progress over the last fifty years.

Festival of Tolerance: Sheikh Nahyan Bin Mubarak Al Nahyan, Minister of Tolerance and Coexistence, confirmed that the global edition of the National Festival of Tolerance this year was able to present to the world a wholesome perspective of the UAE’s experience in fostering a culture of tolerance and human fraternity at the local, regional and international levels through Expo 2020 Dubai.

Sheikh Nahyan highlighted that many international dignitaries who participated in the festival’s activities expressed their admiration of the UAE’s experience in promoting values of coexistence and acceptance at all levels of society.

They also emphasised that the creativity of the experience is reflected within the cultural, religious and ethnic diversity of the nation where communities living and working side by side are able to reflect through their actions the prudent vision of the wise leadership in promoting tolerance, affirming the cohesive nature and mutual respect of society, Sheikh Nahyan added.

This came during the ceremonial reception of the “Zayed Tolerance Trail” initiative. Expo 2020 Dubai marked the last stop of the trail’s first edition.

The trail, which started one month ago from Umm Al Emarat Park, launched the activities planned for this year’s National Festival of Tolerance. Culminating at Expo 2020 Dubai and held under the patronage and presence of Sheikh Nahyan Bin Mubarak Al Nahyan, the trail was attended by a large number of local, regional and international leaders, who were welcomed by Afraa Al Sabri, Director General of the Ministry of Tolerance and Coexistence, joined by a large number of Expo visitors, who flocked to receive the Ride for Life activation team and the Zayed Tolerance Trail contingent.

The “Zayed Tolerance Trail” initiative represents the fruit of cooperation between the Ministry of Tolerance and Coexistence and its strategic partner Dhabian Equestrian Club, in addition to a number of strategic collaborators, led by the Ministry of Interior, the Department of Culture and Tourism-Abu Dhabi, Umm Al Emarat Park, RTA-, Etihad Airways, Etisalat, General Authority of Sports, Zayed Higher Organization, and Aldar Academies.

Sheikh Nahyan said, “Zayed’s trail is a trail of tolerance and his approach was and will always be the approach we all follow in the United Arab Emirates. It is an approach built on authenticity of values, which reflect the national identity of our nation and the mutual respect and joint action we pursue with others. We learnt from Zayed the true meaning of human fraternity by following a path of sincerity in everything that we set out to do. This important initiative sheds light on the achievements of our nation during the past fifty years through country-wide landmarks which reflect the wise leadership’s actions at promoting values of tolerance and coexistence as demonstrated at all levels of society.”

Sheikh Nahyan also pointed out that the UAE is very proud that the goals and objectives of the “Zayed Tolerance Trail” initiative showcases beacons of tolerance in the UAE - landmarks which embody the values of our wise leadership in spreading values of tolerance - where all inhabitants of our cherished land can learn and enrich themselves in the knowledge and rich history that the trail holds.  “Visitors from all across the globe can immerse themselves in the history and values of the trail where landmarks that have been selected shape the basis of the establishment of our nation and tell stories reflective of Zayed’s vision and core values that unify us as a cohesive society. The trail’s path is strengthened by its rich history and is positioned towards a future that will continue to build upon all achievements made as the nation propels itself into the next fifty. We look forward to future editions of the ‘Zayed Tolerance Trail’ initiative with much anticipation,” Sheikh Nahyan proclaimed. 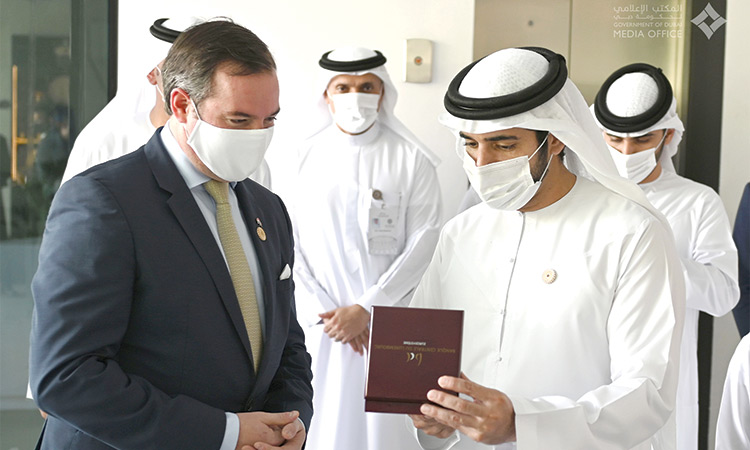 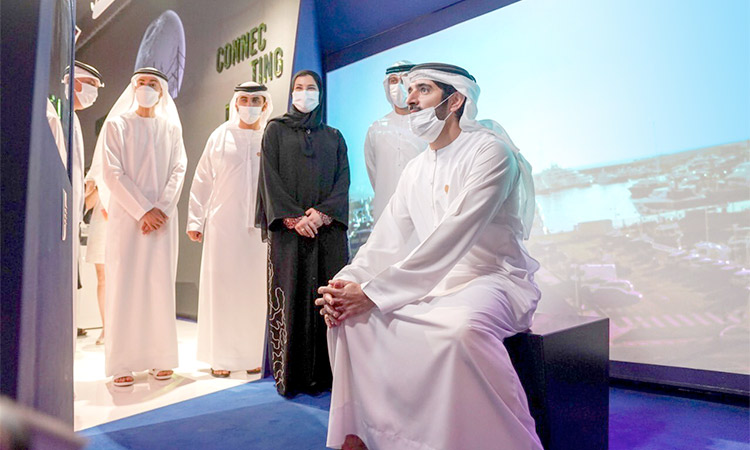