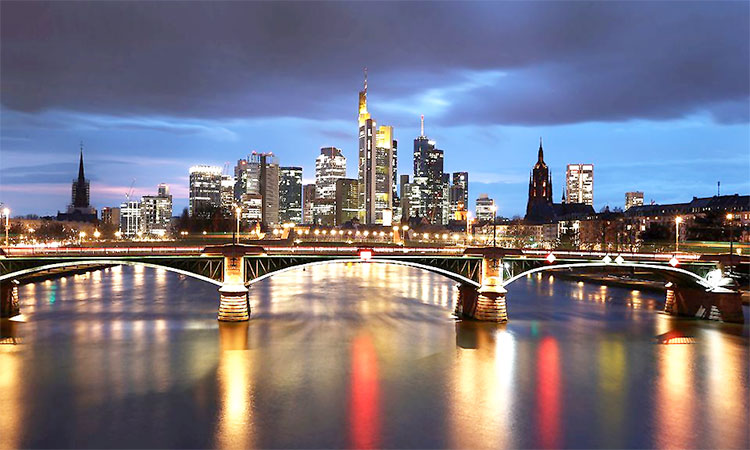 Dark clouds hang over the financial district as the spread of the coronavirus disease COVID-19 continues in Frankfurt, Germany. File/ Reuters

France, Germany and Italy said on Friday that a new US proposal for global minimum corporate tax rate of at least 15% was a good basis for sealing an international deal by July.

The US Treasury Department offered on Thursday to accept a minimum rate of at least 15%, significantly below its proposed 21% minimum for US multinational firms.

It made the proposal at the Paris-based organisation for Economic Cooperation and Development (OECD) where nearly 140 countries aim to reach broad agreement this summer to rework rules for taxing multinational groups and big technology companies, such as Alphabet Inc and Facebook Inc.

“Treasury proposed to the steering group that the global minimum tax rate should be at least 15%,” the department said in a statement. “Treasury underscored that 15% is a floor and that discussions should continue to be ambitious and push that rate higher.” US Treasury Secretary Janet Yellen first proposed a 21% US corporate minimum tax in April as part of President Joe Biden’s $2.2 trillion infrastructure spending proposal, which would be financed largely by increasing the US corporate tax rate to 28%.

The Trump administration and congressional Republicans in 2017 cut the corporate tax rate to 21% from 35%. At the same time, the Treasury launched a US minimum tax, of 10.5%, known as the Global Intangible Low-Taxed Income tax (GILTI) to capture revenue shifted by companies to tax-haven countries.

The Biden administration’s proposed 21% GILTI rate was widely viewed as a starting point for renewed OECD talks on a global minimum tax.

While France and Germany backed the 21%, other countries have pushed for a lower rate, as previous OECD discussions on the subject had centered around 12.5%, the same rate charged by Ireland.

“The last proposal made by the United States could be a good compromise,” French Finance Minister Bruno Le Maire said as he arrived for talks with eurozone counterparts in Lisbon.

His German counterpart Olaf Scholz welcomed the new US proposal as “big progress” and EU Economics Commissioner Paolo Gentiloni said it was a step forward to a deal, as did Italian Economy Minister Daniele Franco.

All hoped that talks would be wrapped up as planned by a July meeting of G20 finance ministers, amid suggestions from the OECD that it could take until October to finalize a deal.

While Finance Minister Paschal Donohoe did not address the issue publicly in Lisbon, he reiterated in a pre-recorded interview for an online event his opposition to a “high” minimum tax and said September and October would be the key period for getting a deal.

Two eurozone officials at the meeting in Lisbon said that the US offer would find wide backing in the broader European Union. “That 15% will be acceptable for all EU member states, including Luxembourg and Ireland,” one of the officials said.

Britain, which is due to host an online meeting of finance ministers next week, remains concerned that the latest US proposals do not address the challenge of ensuring large multinationals, especially tech companies, pay more tax in countries where they generate revenue.

A US Treasury official said the Biden administration will continue to advocate for the highest rate possible above 15%, adding that the offer does not alter the 21% proposed US minimum tax.

The official said that even at 15%, the spread between US and global minimum rates would narrow considerably, because there currently is no global minimum tax.

“The 15% rate is certainly more realistic given where other countries are,” said Manal Corwin, head of KPMG’s Washington National Tax practice and a former Treasury official.

“Importantly, this is signaling that the US is willing to accept a global minimum tax that is well below the rate they are proposing for GILTI,” she added. “I suspect it was important for reaching agreement at the OECD that the US is willing to agree to something well below 21%.” The Treasury Department proposed the global minimum tax as a way to minimize the impact of a higher US tax rate on the competitiveness of American companies and deter them from shifting operations or profits to lower-tax jurisdictions.

Separately, eurozone business growth accelerated at its fastest pace in over three years in May, a survey showed on Friday, but European Central Bank President Christine Lagarde said an uncertain recovery still needed emergency support from the ECB.

After a slow start to vaccinations the pace is picking up, allowing some restrictions imposed to quell the spread of the coronavirus to be lifted, and a strong resurgence in the bloc’s now-reopening service industry added to the impetus from a booming manufacturing sector.

As the economy rebounds and confidence improves, some policymakers are making the case for the ECB to start giving up its emergency measures and revert to more traditional forms of stimulus.

But others are more cautious, warning the fledgling recovery is predicated on copious ECB support and that a recent rise in borrowing costs to two-year highs is already a major drag.