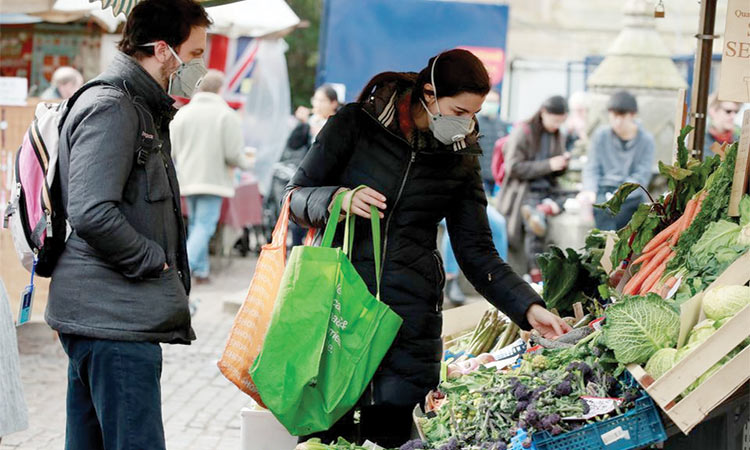 Shoppers at a market in Cambridge, Britain, on Monday. Reuters

Britain stepped up efforts on Monday to look at the case for a digital pound in response to the challenge posed by cryptocurencies such as bitcoin, and outlined plans to make its financial market more attractive after Brexit.

“Alongside this we will set up a new financial market infrastructure ‘sandbox’ for firms innovating with technologies like distributed ledger technologies,” he added.

The BoE said that it and the government had not yet made a decision on whether to introduce a CBDC in the UK, and that it would engage widely with stakeholders on the benefits, risks and practicalities of doing so.

Any digital currency would be designed to exist alongside physical cash and existing bank deposits, rather than to replace them, the central bank said.

The taskforce will monitor developments overseas to ensure the UK remains at the forefront of global innovation on digital currencies, it added.

China is a front-runner to launch a CBDC, which could help authorities modernise financial systems, meet the threat from cryptocurrencies and speed up domestic and international payments.

Last week, the European Central Bank said it was studying an electronic form of cash to complement banknotes and coins but any launch was still several years away.

Since Britain’s departure from the European Union’s orbit on Dec. 31, the financial sector has faced restrictions on serving EU customers, and the British government is seeking to make London a more attractive global financial centre. The government will propose removing restrictions inherited from the EU, including on who can trade shares in London and the double volume cap.

“The consultation process aims to deliver a rulebook that is fair, outcomes-based and supports competitiveness, whilst ensuring the UK maintains the highest regulatory standards,” Sunak said. Britain will also propose changes to prospectuses, a document companies must publish when listing on an exchange or issuing new shares.

The aim would be to ensure the rules are “not overly burdensome”, Sunak said.

Some 36 per cent of employees in Britain did at least some work from home last year as the coronavirus pandemic closed many workplaces, a jump from around 26 per cent in 2019, the country’s statistics office said on Monday.