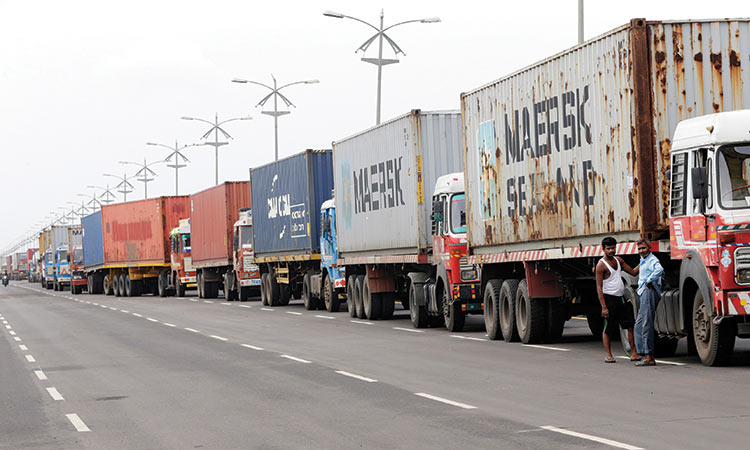 Trucks loaded with containers outside a port in Mumbai. File/Associated Press

“India’s merchandise exports in December 2020 totalled $26.89 billion, compared with $27.11 billion in December 2019, a marginal fall of 0.80 per cent,” a Ministry of Commerce and Industry statement said on the basis of preliminary data.

However, in December 2020, the value of non-petroleum exports stood at $24.73 billion, registering a positive growth of 5.33 per cent on YoY basis.

Similarly, the value of non-petroleum and non-gems and jewellery exports in December 2020 stood at $22.15 billion compared with $21.06 billion in December 2019, registering a positive growth of 5.17 per cent. On the other hand, India’s merchandise imports grew by 7.6 per cent in December to $42.60 billion from $39.59 billion during the corresponding month of the previous year.

“The sharp step up in the value of merchandise imports to $42.6 billion, widened India’s merchandise trade deficit to $15.7 billion, the highest level since November 2018,” said ICRA Principal Economist Aditi Nayar.

“The recovery in imports reinforces our expectation that the current account surplus will deflate to sub-$5 billion in H2 FY2021.”

EEPC India Chairman Mahesh Desai said while domestic economy is showing sure signs of bounce back, there is still a rough sail for exports in the global market.

“This is despite roll out of Covid 19 vaccine in several parts of the world,” said Desai.

According to FIEO President Sharad Kumar Saraf, December exports also signals that our traditional and labour-intensive sectors of exports have passed the most challenging and testing times as both Christmas and New Year Season sales have shown positive trends with further improvement in coming months.

Going ahead by this trend, we expect our inventories to be liquidated, adding further to the overall demand, observed Saraf.

In addition, Emkay Global’s Lead Economist Madhavi Arora said: “The normalisation in trade deficit is an encouraging indication of recovery in domestic demand, in line with other high frequency data like GST, rail freight and car sales etc. Meanwhile exports may see some downward pressure amid renewed lockdowns in Europe and the US.”

“We see FY21 BoP in surplus of $96 billion helped by surplus in current account and solid FPI and FDI inflows”, Arora said. Meanwhile, expectations of continuous foreign investment into the domestic equity market will support the new found strength in Rupee, analysts opined.

However, global cues such as US political situation along with global vaccination roll-out will play a determining role in Rupee’s further movement.

“Looking at the weakness in dollar index and foreign fund inflows in to Indian equity markets, Rupee expected to remain firm though it has come to important support levels near 73 mark,” said Devarsh Vakil- Deputy Head of Retail Research at HDFC Securities.

“We expect rupee to remain rangebound this week and digest recent gains.”

Besides, hopes of positive corporate earning outlook will sustain foreign investors’ interest in the market.

In December, the FIIs invested around $8 billion in both equity and debt segment.

Consequently, rupee continued to gain for the fifth successive week to close at 73.12 to a greenback.

“This week, on the domestic front no major economic data is expected to be released but more fund inflow by the FIIs will continue to keep the rupee gains elevated,” said Gaurang Somaiya, Forex & Bullion Analyst, Motilal Oswal Financial Services. 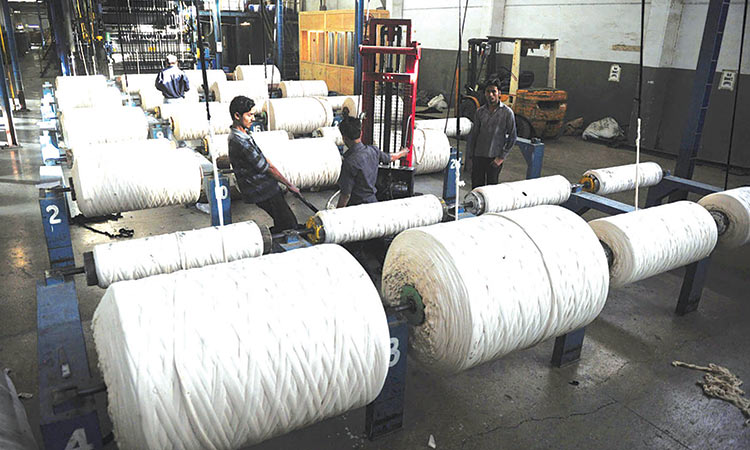