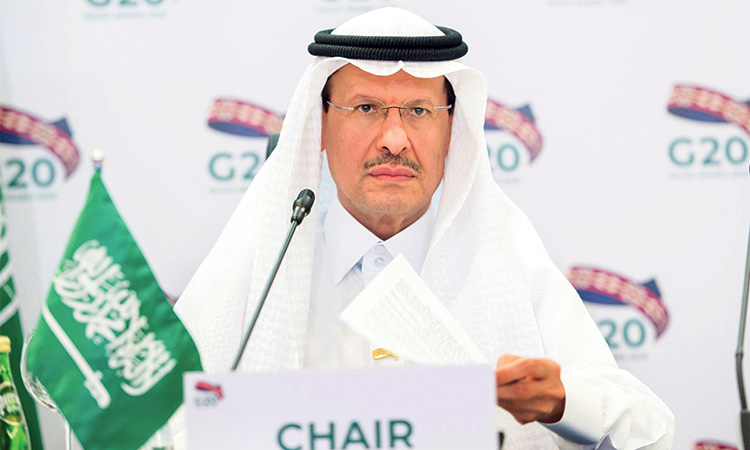 Prince Abdulaziz Bin Salman Al-Saud chairs a virtual summit of the Group of 20 energy ministers at his office in Riyadh on Friday. Associated Press

The Saudi energy minister told a conference of the G20 group of the world’s largest economies on Friday that ensuring affordable energy supply is key to facilitating a global economic recovery. “Having affordable, reliable, accessible energy supply is considered a necessity to enable basic services, including health care, and help our efforts in assisting economic recovery,” Prince Abdel Abdulaziz bin Salman said in an opening speech to a video-conference of the G20 energy ministers.

Saudi Arabia is currently the chair of the group.

Top oil nations were finalising a deal at G20 talks on Friday for big output cuts to lift prices slammed by the coronavirus crisis with Russia and Saudi Arabia taking a lion’s share and signs the United States might take unprecedented moves to help.

Riyadh, Moscow and its allies, which make up the informal Opec+ group, had forged a pact to curb crude production by the equivalent of 10% of global supplies in marathon talks on Thursday and said they wanted others to cut a further 5%.

But efforts to conclude the Opec+ deal hit the buffers when Mexico refused to sign up in full.

However, the Mexican president said Donald Trump had told him he might make cuts on Mexico’s behalf, even though the US president has given no public indication Washington would join in the cuts and has instead threatened Saudi Arabia with tariffs and other measures if it did not resolve the oil market crisis.

Major oil markets were closed on Friday as the G20 energy minister held a video conference, hosted by Saudi Arabia, but prices failed to rally after Thursday’s cuts - the biggest in history - as a 15% cut in global supplies still leaves a huge overhang of oil when demand has plunged 30%.

“We call on all nations to use every means at their disposal to help reduce the surplus,” US Energy Secretary Dan Brouillette told the G20 talks.

The Opec+ pact, if Mexico signs up, would see 10 million barrels per day (bpd) of oil removed, with an additional 5 million bpd withdrawn if the others such as the United States joined. Norway and Canada, both outside OPEC+, have already indicated they could cut.

Brouillette said US oil output could fall by between 2 million and 3 million bpd by the end of 2020, although Russia has previously said such a natural decline in output was not the same as a formal cut.

Kremlin spokesman Dmitry Peskov said producers were working to win over Mexico and said action involving others was “unavoidable”, even though he acknowledged US law barred American producers from joining any price cartel.

The Mexican president said Trump had “very generously said to me that they were going to help us with the additional 250,000 (bpd) to what they are going to contribute.” Mexico, which has long been in a standoff with Washington over Trump’s plan to build a wall between the two countries, cares less about low oil prices because of its unique hedging programme, which protects it against price falls.

“This whole agreement is hinging on Mexico agreeing to it,” Saudi Energy Minister Prince Abdulaziz bin Salman told Reuters, adding he hoped it would “see the benefit of this agreement not only for Mexico but for the whole world.

The head of the International Energy Agency, Fatih Birol, said in a statement he hoped the G20 talks would “help restore some much-needed stability to oil markets.” On Thursday, he had said oil importing countries could offer some support to the market by announcing they would make extra purchases of crude for strategic reserves.

But there is only so much importers can buy when the world’s storage capacity on land and at sea is rapidly filling up.

The crisis in the oil market has pushed Russia and Saudi Arabia to patch up differences after their acrimonious OPEC+ meeting in March where a dispute over how best to tackle falling prices led them to scrap their existing pact on production restraint that had helped balance the market for three years.

The new OPEC+ deal envisaged all members reducing output by 23%, with Saudi Arabia and Russia each cutting 2.5 million bpd and Iraq cutting over 1 million bpd in May-June.

Riyadh and Moscow agreed that their cuts would both be calculated from an October 2018 baseline of 11 million bpd, even though Saudi supplies surged to 12.3 million bpd this April.

Under the plans, OPEC+ would ease cuts to 8 million bpd from July to December and relax them further to 6 million bpd between January 2021 and April 2022, OPEC+ documents showed.

UBS said the cuts were still not enough. “We still see Brent falling to $20 per barrel or lower in the second quarter of 2020,” UBS said.