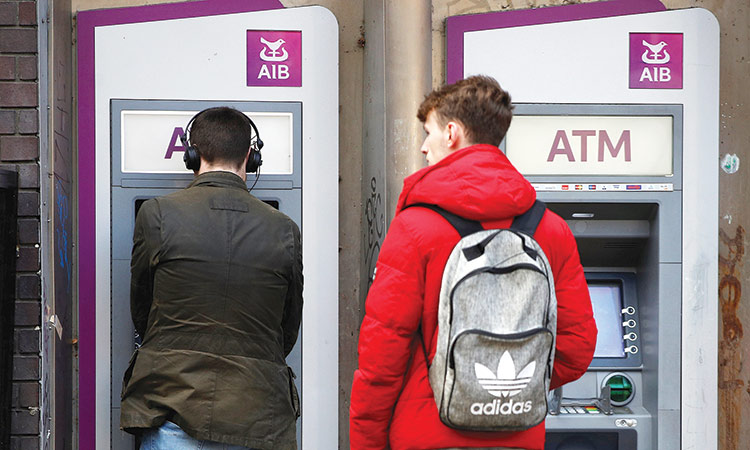 Customers use an ATM of a bank in Dublin, Ireland. Reuters

Ireland’s gross domestic product (GDP) grew by 5.5% in 2019, likely making it the European Union’s (EU) fastest-growing economy again, although it was lower than the 6.3% predicted by the finance department as it braces for the potential impact of the coronavirus outbreak.

GDP, which in recent years has become an incredibly volatile way of measuring Ireland’s open economy, expanded by 1.8% on a quarterly basis from October to December, data from the Central Statistics Office (CSO) showed on Friday.

Greater Brexit clarity convinced Ireland to nudge up its GDP growth forecasts for 2019, 2020 and 2021 in January but Finance Minister Paschal Donohoe said this week that Ireland’s highly integrated economy will inevitably be impacted by the expected global slowdown related to coronavirus.

Donohoe said it was too early to predict the extent to which growth would be impacted but that weaker global growth will affect the country’s short-term outlook. The economy is forecast to grow by 3.9% this year.

“Early indications suggest solid growth in the first quarter this year,” Donohoe said in a statement on Friday, pointing to strong data on employment, tax collection, retail sales and from purchasing managers’ indexes.

“Of course, we are now heading into a precarious trading environment as a result of the spread of coronavirus. While primarily a public health and well-being issue, the economic impacts have the potential to be significant.”

Ireland has so far reported 13 coronavirus cases, including the first community transmission of the virus on Thursday.

The country’s two largest banks, Allied Irish Banks and Bank of Ireland, said on Friday that they would seek to support businesses affected by coronavirus, including offering emergency working capital and payment flexibility.

The volitile nature of Irish GDP is due to the large cluster of multinational companies operating in the country, and the relevance of the headline figure has, as such, diminished over the past years.

While such distortions have inflated growth to 8.2% in 2018 and 8.1% in 2017, a range of other more stable data points to very strong growth in the real economy throughout the period.

Unemployment has fallen to 4.8% from a peak of 16% in 2012, when the country was midway through an international bailout following an economic crash a decade ago.

The statistics office has phased in new measures which strip out some of the distorting globalised activities. One such measure, modified domestic demand, expanded by 3% last year.

Meanwhile, Allied Irish Banks (AIB) said it plans to cut its workforce to below 8,000 by 2022, a sharper reduction than previously flagged, after it reported on Friday a 23% dip in pre-exceptional full year profits before tax.

Chief Financial Officer Donal Galvin told Reuters that the bank, one of Ireland’s two dominant lenders, would aim to make the cuts through negotiated voluntary severance.

Profits at AIB and main rival Bank of Ireland have fallen steadily from post-Irish banking crisis highs in 2015 amid a persistent low interest rate environment that has forced both to look for further cost cuts.

AIB set out new medium-term targets on Friday, which it said would sustainably generate shareholder value. The bank said it expected operating costs to increase by 2 to 3% this year - following a 5% rise to 1.5 billion euros ($1.7 billion) in 2019 - but that it would cut them back down to 1.5 billion euros by 2022.

To pay for investments, that includes reducing staff from 9,520 at the end of 2019, primarily through cuts involving those resolving legacy issues, as well as efficiencies achieved through digitalisation. The bank’s chief executive had said as recently as October that it would target a headcount below 9,000 by 2022.

“The way in which we deal with employees in situations like this is to negotiate voluntary severance agreements for our staff members who and where this could be an interesting opportunity for them,” Galvin told Reuters by phone.

Including exceptional items such as the further 300 million euros the bank set aside to cover possible compensation owed to overcharged mortgage customers, the bank’s profits last year fell to just 499 million euros.

As a result, it more than halved its proposed annual dividend to 217 million euros. 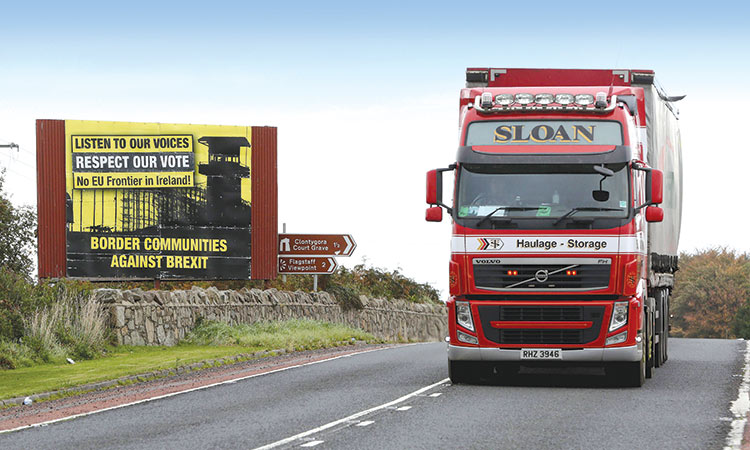 Ireland’s economy in good health ahead of Brexit

Ireland’s gross domestic product (GDP) rose by 0.7% quarter-on-quarter in the first three months of the year to stand 5.8% higher than a year ago and put the European Union’s best-performing economy in a strong position ahead of a potential Brexit shock.