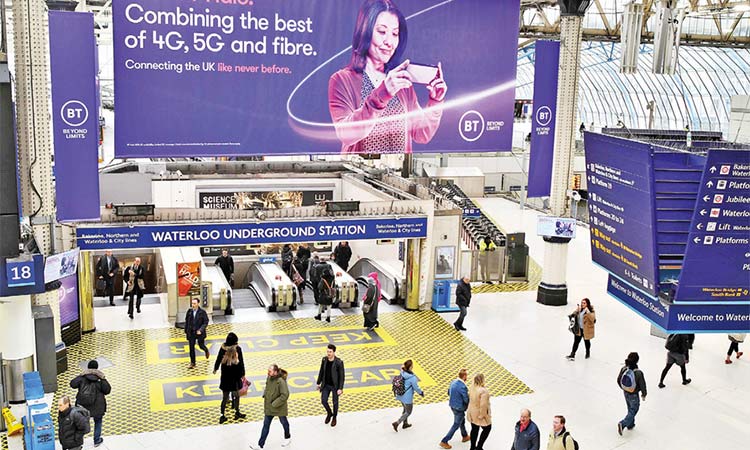 Britain has been using Huawei technology in its systems for the past 15 years. File

London’s decision − following a meeting of the National Security Council chaired by Prime Minister Boris Johnson − came shortly after Brussels said it would allow Huawei a limited 5G role in the European Union.

“We want world-class connectivity as soon as possible but this must not be at the expense of our national security,” Britain’s Digital Secretary Nicky Morgan said in reference to high-speed fifth generation networks that offer almost instantaneous data transfer.

“High risk vendors never have been and never will be in our most sensitive networks,” she stressed.

Such vendors will be excluded from sensitive UK locations, such as nuclear sites and military bases, while their market share is to be capped.

Both Brussels and London, while never explicitly naming the Chinese giant, are grappling to find a middle way to balance Huawei’s huge dominance in the 5G sector with security concerns.

Huawei welcomed news that it would have at least a limited role in building Britain’s 5G networks, after Washington lobbied hard for the company to be sidelined completely on security concerns.

“Huawei is reassured by the UK government’s confirmation that we can continue working with our customers to keep the 5G roll-out on track,” said Huawei Vice-President Victor Zhang.

Washington has banned Huawei from the rollout of the next generation mobile networks because of concerns − strongly denied − that the firm could be under the control of Beijing.

Unlike the United States, Britain has been using Huawei technology in its systems for the past 15 years. The US had threatened to limit intelligence sharing with London in the event of Huawei winning a UK role.

All eyes will now be on Washington’s response to Tuesday’s announcements, while analysis group Fitch warned that the US could indeed look to retaliate.

“The US has been putting a lot of pressure on its allies to ban Huawei, and failure to do so will raise questions about its strategy, as we expect it will look to retaliate, with threats to stop intelligence-sharing already made,” Fitch said Tuesday.

The matter could also meanwhile hinder the chances of a favourable Britain-US trade deal after Brexit, according to analysts.

While there has been intense debate in Europe and the US about whether or not to exclude Huawei from developing 5G, Johnson on Monday insisted that the UK can have “technological progress” while preserving national security.

In Brussels on Tuesday, the European Union ruled out banning the company.

“It is not a question of discrimination, it is a question of laying down rules. They will be strict, they will be demanding and of course we will welcome in Europe all operators who are willing to apply them,” a top EU official said.

Huawei is widely viewed as providing the most advanced alternative for super-fast data transfers behind technologies such as self-driving cars and remotely operated factory robots.

Existing providers of limited 5G network infrastructure in Britain include Nokia and Ericsson, while non-core elements are counted as antennae and base stations attached to masts and roofs. A number of UK mobile phone operators, including EE and Vodafone, currently sell 5G services − but it is so far available only in a handful of cities, notably London and Birmingham.

The United States is “disappointed” by London’s decision to approve plans to use technology from Chinese telecoms giant Huawei in the country’s 5G cellular network, a US official said Tuesday.

“There is no safe option for untrusted vendors to control any part of a 5G network,” a senior administration official said in a statement to AFP. “The United States is disappointed by the UK’s decision.” Washington has banned Huawei from the rollout of the next generation mobile network that offers almost instantaneous data transfer because of concerns that the firm could be under the control of Beijing, an allegation it strongly denies.