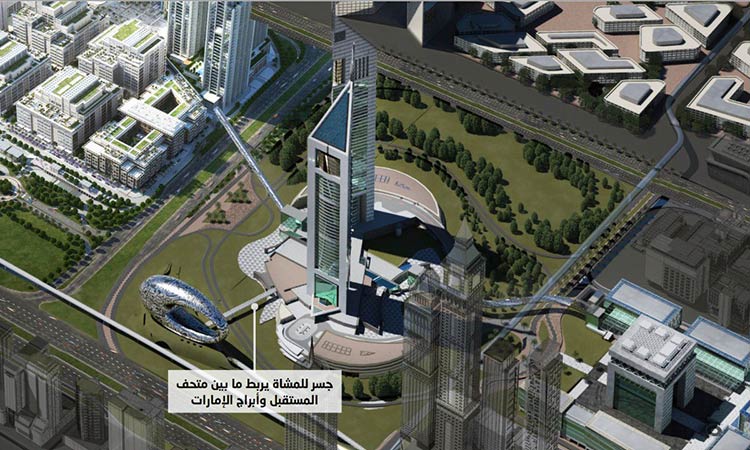 An artist's impression of the proposed Dubai Future District.

The new district will include be directly connected via a bridge with Dubai World Trade Centre (DWTC), Emirates Towers and Dubai International Financial Centre (DIFC). It will be the largest district dedicated to developing the new economy in Middle East.

Sheikh Mohammed also announced the launch of an Dhs1 billion fund to support new economy companies who will operate out of Dubai Future District, and who have the potential and foresight to drive Dubai’s new economy and contribute to enhancing the emirate's position as a preferred destination for global talents and entrepreneurs, through many initiatives and projects aimed at turning Dubai into a nexus for business and an integrated investment environment that offers exceptional facilities.

The new district, along with the new fund, will provide unprecedented financing and legislative facilities and options for businesses.

According to Sheikh Mohammed, Dubai’s foreign trade is targeting Dhs2 trillion by 2025. The target will be supported by creation of 50 offices around the world. The offices job would be promoting Dubai’s unrivalled trade, tourism and investment offerings through and intensifying and unifying of external marketing efforts 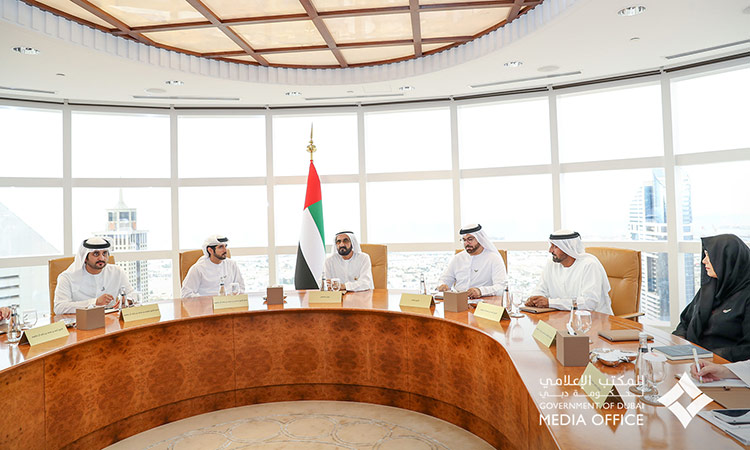 While presiding over the second meeting of the Dubai Council, Sheikh Mohammed Bin Rashid said, "Dubai will become the world’s capital of the new economy. The new economy will be a major focus on the 50 goals agenda that we seek to achieve in the next five years. The Dubai Council will focus on opening new economic sectors for the emirate and transform its existing sectors."

Sheikh Mohammed added, "We aim for a major shift in Dubai’s foreign trade through stimulation and revitalisation with continuous development of all its logistical, legislative and service tools, in addition to building new international partnerships."

"The new Dubai offices for trade and tourism promotion will be based around the world, and the unification of external efforts will carry better results for the Dubai economy," Sheikh Mohammed explained, adding, "I asked that messages be sent to all directors of public departments and public figures in the emirate to submit development proposals to me directly to achieve positive transformations in our path."

Sheikh Mohammed affirmed, "2020 will be the beginning of a huge developmental leap, and it is the year that will drive us to the next decade with full force."

Sultan Ahmed Bin Sulayem, Group Chairman and CEO of DP World, has been assigned the responsibility of handling this file by opening new foreign markets for the emirate, developing the logistics system and enhancing the competitiveness of local exports. To carry out the job, a committee will be formed to manage these responsibilities and achieve the desired goals through all promotional methods.

The committee is tasked with presenting a plan within 30 days of its establishment to explore the possibilities of opening new markets for Dubai’s foreign trade, establishing strategic international partnerships, enhancing the competitiveness of local exports, creating new export sectors, developing the logistics system in Dubai, and boosting the capabilities of international shipping lines managed by the emirate.

The Dubai Future District initiative acts as an umbrella to many joint projects that will be launched in line with the 4th of January 2020 Document that was announced by His Highness Sheikh Mohammed Bin Rashid Al Maktoum, and in which he pledged to continue working on developing the emirate by welcoming national and international talents, building new partnerships that create job opportunities and provide financing to entrepreneurs and startups, and adopting initiatives that facilitate the establishment of new companies and the launch of innovative ideas to design the economy of the future.

Ten initiatives will be launched in the coming period to support the economy of the future by providing an attractive investment, technological, legislative, service and enabling environment that is the best of its kind in the region and globally.

The first initiative is the Dubai Future Economy Fund, an Dhs1 billion fund dedicated to future economy entrepreneurs in Dubai and the region by providing all kinds of support and facilities that are needed by tech startups in their early stages.

Office of Future Economy Companies is the second initiative, in which an office for future economy companies will be established and tasked with issuing special five-year residency visas to future entrepreneurs. It will also issue licenses for innovative projects, provide banking facilities to future economy entrepreneurs, offer world-class legal services to entrepreneurs, and provide flexible work spaces, training services and workshops.

The third initiative is the Legislative licenses to innovate and experiment the technologies of the future economy. Under this initiative, future economic entrepreneurs will be able to obtain legislative licenses to test their innovations in designated areas that will serve as pilot areas, through the Legislative Laboratory and District 2071. These pilot areas will contribute to supporting the economy of the emirate of Dubai.

Examples of innovation pilot areas include an autonomous car trial area, a drone trial area for civilian use, an AI trial area in hospitals and an augmented and virtual reality trial area in malls.

Fourth on the list is reduced housing prices for future economy pioneers. Under this initiative, future economy entrepreneurs can take advantage of available housing options at a unit price lesser than 3,000 dirhams per month. For this purpose, District 2071 will partner with real estate developers to provide housing options at the targeted price.

In order to obtain financing and reduce the burden of the initial public offering procedures, the exchange aims to provide the necessary infrastructure for future economy companies, to motivate investors and their shares’ trading, while facilitating the ways of selling their investment shares.

The seventh initiative will see the formation of the largest space for future economy companies’ incubators and accelerators. This space will be the largest incubator of its kind in the Mena region to assist future economy companies in their initial founding stages, by providing training in innovation and developing prototypes, in addition to providing an opportunity to benefit from the network of partners and available facilities.

The Future Economy Research Centre - the eighth initiative - will contribute to the design of applied research through several specialised laboratories (in the field of robotics, artificial intelligence, etc.) so that the centrewill form a platform for scientific research and the joint cooperation with government and private sectors.

Under the centres umbrella, examples of specialised laboratories are the Robotic Systems Lab, which aims to support and unify the main entities’ efforts in developing the computer science and robotics for government and private sectors.

The programme will provide many services to support innovative students, including allocating workspaces, providing mentoring and guidance, providing educational materials, as well as providing opportunities to obtain grants and funding from government and private agencies.

Lastly, international conferences on the economy and companies of the future will see the Dubai Future District host the largest and most important international events and conferences seeking to provide global platforms for future economy leaders to communicate through, explore growth prospects and present their projects to a larger audience.

The Dubai Future District project includes three prominent areas in Dubai: Dubai World Trade Centre, Emirates Towers and Dubai International Financial Centre, all of which have contributed since their establishment to achieving great successes in the economy of Dubai and the UAE. These areas will be connected through a bridge inspired by the Museum of the Future.

The integration of Dubai World Trade Center, Emirates Towers and Dubai International Financial Centre will make Dubai Future District the largest innovation area in the world, thus consolidating Dubai's leadership as the largest economic hub in the region, and providing more success opportunities for entrepreneurs who are looking for growth and expansion in the markets of the Middle East, Asia and Africa. 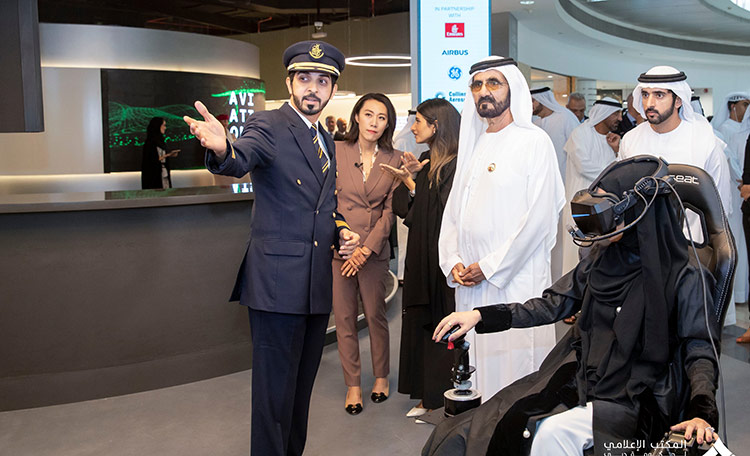 The four innovative labs will focus on predicating the future of aviation, energy, blockchain and entrepreneurship, says Mohammed.