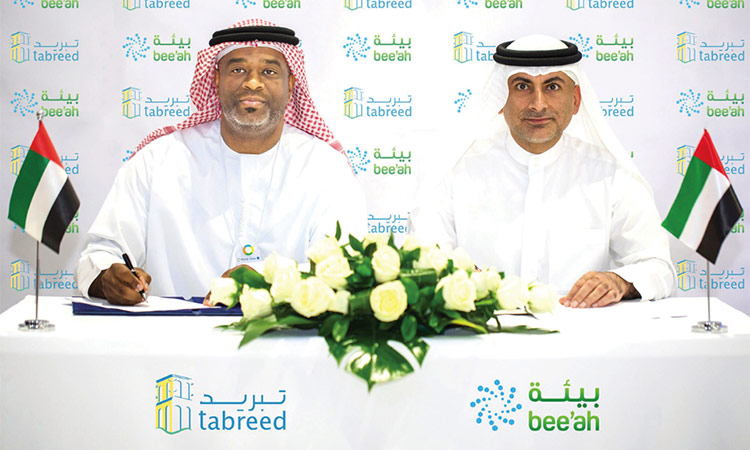 The partnership was signed by Khaled Al Huraimel, Group CEO of Bee’ah, and Bader Saeed Al Lamki, CEO of Tabreed. Under the agreement, Bee’ah and Tabreed will develop potential district cooling projects at locations across Sharjah. District cooling is more environmentally friendly and cost-efficient than traditional space cooling methods and in line with Bee’ah’s vision to drive a more sustainable quality of life.

Commenting on the agreement, Bee’ah’s Al Huraimel said: “Bee’ah has made significant investments in sustainability and infrastructure in Sharjah to date. Our partnership with Tabreed is a further illustration of our continued commitment to seek new solutions that are more sustainable and cost-competitive. The UAE faces extreme weather conditions, especially during summer, but through new district cooling projects, we hope to tackle this issue through more energy-efficient measures.”

Bader Al Lamki, Tabreed’s Chief Executive Officer, said: “We are pleased to be partnering with Bee’ah to explore opportunities to bring reliable, sustainable and cost-efficient district cooling solutions to the Emirate of Sharjah. Our strong core business, innovative technology, experienced team and structuring capabilities have made Tabreed the partner of choice, and we look forward to contributing to the continued growth and long-term sustainability of the Emirate

District cooling is a key part of the district energy systems that are the foundation of sustainable, economic and urban development. Ideal for large-scale, high density developments such as downtown business districts, airports, university campuses, residential towers and commercial establishments. District cooling relies on a centralised cooling plant that provide cooling to buildings within its grid. The plant supplies chilled water via insulated underground piping networks to a cluster of buildings in a service area, or district. Energy Transfer Stations (ETS) then utilises the chilled water to force cold air inside the buildings to produce an air-conditioned environment with warm water then returning to the plant to be re-chilled and redistributed. In some cases, plants use nearby sea water instead of potable water, leading to further environmental benefits and water savings. District cooling is highly efficient and cost-effective, providing cost savings from building operations and maintenance to reduce energy consumption, while still efficiently delivering on cooling requirements. The collaboration is designed to increase the use of this energy-efficient district cooling solution among some of the largest projects in Sharjah.

Space cooling represents up to 70 per cent of electricity consumption at peak times in hotter countries such as the UAE. The International Energy Agency estimates that the energy used by such cooling will more than triple by 2050. With 60 to 80 per cent less energy consumption than the average conventional cooling systems, centralised district cooling will play a major role in tackling this global challenge.

An innovation leader and a pioneering force for sustainable solutions in the Middle East, Bee’ah is a public-private partnership company that was founded in 2007. With ventures in industries ranging from Waste Management, to Environmental Consulting, Renewable Energy, Technology, Sustainable Transportation, and Training & Development, Bee’ah is creating a better quality of life for all cities and communities in the region. Bee’ah has executed a comprehensive strategy focused on sustainability and digitalisation, which has reaped rich benefits in the form of the region’s highest waste diversion rates, and the GCC’s first waste-to-energy plant. Bee’ah has supported the region’s agenda for a circular economy and personifies the UAE’s ambitions in leading the dialogue surrounding sustainability in the Mena region.

Tabreed is a leading international district cooling developer based in the UAE that provides energy-efficient, cost-effective and environmentally friendly year-round cooling solutions. Founded in 1998, and listed on the Dubai Financial Market, Tabreed’s cooling infrastructure is an integral part of the region’s growth. The company now delivers over 1.16 million refrigeration tonnes to major residential, commercial, government and private projects. Tabreed owns and operates 78 plants in its portfolio across the GCC, including 65 plants in the United Arab Emirates, two in the Kingdom of Saudi Arabia, four in Oman, one in the Kingdom of Bahrain and others in the region.