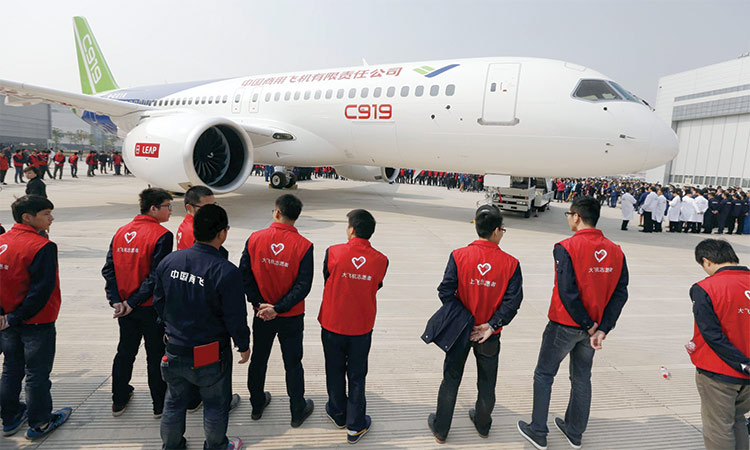 Employees near a C919 passenger jet at its factory in Shanghai. Agence France-Presse

The state-owned Commercial Aircraft Corporation (COMAC) struggles with a range of technical issues that have severely restricted test flights, people familiar with the programme told Reuters.

The most recent problem came down to a mathematical error, according to four people with knowledge of the matter.

Delays are common in complex aerospace programmes, but the especially slow progress is a potential embarrassment for China, which has invested heavily in its first serious attempt to break the hold of Boeing and Airbus on the global jet market.

COMAC engineers miscalculated the forces that would be placed on the plane’s twin engines in flight - known in the industry as loads - and sent inaccurate data to the engine manufacturer, CFM International, four people familiar with the matter told Reuters. As a result, the engine and its housing may both have to be reinforced, the people said, most likely at COMAC’s expense - though another source denied any modification.

That and other technical and structural glitches meant that by early December, after more than two and a half years of flight testing, COMAC had completed less than a fifth of the 4,200 hours in the air that it needs for final approval by the Civil Aviation Administration of China (CAAC), two people close to the project told Reuters.

COMAC, which has been developing the C919 largely in secret since 2008, rarely discloses its targets. Company official Yang Yang told Chinese state media in September that he expected certification by the country’s regulators in two to three years, without giving any further details. The company’s previous publicly stated target was end-2020. Other COMAC officials have said they are aiming for certification and delivery in 2021.

COMAC did not respond to Reuters requests for comment for this story. CFM, a joint venture between General Electric and France’s Safran, declined comment.

COMAC has still not finalised the correct calculations and data to send to the engine manufacturer, which are key to ensuring that the engine does not fail under heavy loads, one of the sources told Reuters. Another said load calculations often evolve during development. But given the uncertainty, there is no guarantee COMAC will meet Yang’s 2021-2022 target, people close to the programme told Reuters.

“Things do not always work out as planned, but I hope COMAC would slow down a bit and try not to rush things,” one of the sources familiar with the engine issue told Reuters. “Otherwise there will be tons of issues later on.”

The engine miscalculation does not reflect a lack of theoretical understanding - China has been putting people in space for almost two decades. But it does illustrate the national aerospace manufacturer’s lack of experience in designing and building commercial aircraft.

Problems have not been confined to the drawing board. COMAC found cracks in the horizontal stabilizers of some of the first few aircraft built, two sources said, although that problem has now been fixed. It also found a gearbox attached to the engine was vulnerable to cracking, which caused an engine to shut down during a test flight, three sources told Reuters, a problem that potentially affects all six C919 jets now in test flights.

Regular inspections of the gearbox to check for cracks and leaking oil have curtailed COMAC’s flight test programme, they said.

The gearbox problem, discovered in 2018 and not previously reported, was due to unexpected vibrations, two sources told Reuters. Engineers on the programme have found ways to minimize the risks, the sources said.

Unwanted vibration, which in the worst case can shred parts inside an engine, is a problem faced by even long-established aerospace manufacturers. US engine maker Pratt & Whitney revised software due to destructive vibration on some new engines, Reuters reported in October.

However, the accumulation of problems has put COMAC significantly behind schedule, which could prove costly.

The C919 is designed to compete with the Boeing 737 MAX and Airbus 320neo families. After Boeing and Airbus struck deals to take over production of rival planes made by Embraer and Bombardier, China’s COMAC is now effectively the third option in the market for planes with more than 100 seats.

Most industry forecasters now expect the prolonged cyclical boom in demand for commercial planes to fade this year, as business confidence wanes amid geopolitical tensions, meaning a plane that debuts in 2021 or 2022 will likely miss out on orders for years to come. 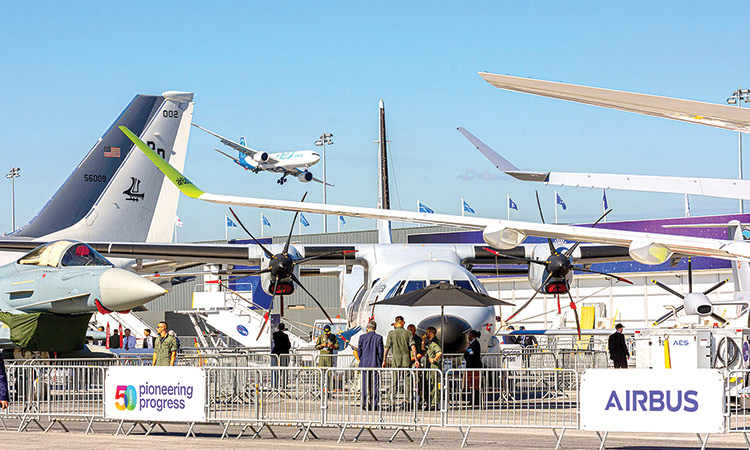