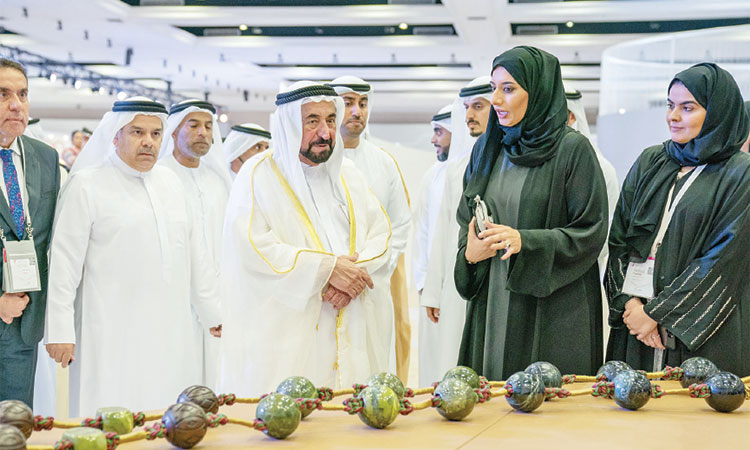 Sheikh Sultan gets a briefing during the opening session of the WEEGS 2019 in Sharjah on Tuesday.

His Highness Sheikh Dr Sultan Bin Mohammad Al Qasimi, Member of the Supreme Council and Ruler of Sharjah, has asserted that he will personally support programmes and efforts to empower women around the world, particularly in Africa, Asia and Latin America.

The Sharjah Ruler also called on entities across Sharjah to expand their initiatives to include all communities worldwide where women need support to be educated, trained and participate in the economy.

These statements came during the opening ceremony of the second Women’s Economic Empowerment Global Summit (WEEGS 2019) in Sharjah on Tuesday where Sheikh Sultan took the pledge before the summit’s 1,000-plus participants.

The two-day summit is organised by the NAMA Women Advancement Establishment (NAMA) and United Nations Entity for Gender Equality and the Empowerment of Women (UN Women). The two-day event themed ‘Drivers of Change’ is being held under the patronage of Her Highness Sheikha Jawaher Bint Mohammed Al Qasimi, Chairperson of NAMA.

Welcoming all attendees to the summit, which will be shining light on diverse international perspectives on the effective inclusion of women in economy, the Sharjah Ruler said: “Women are mothers, wives, sisters, peacemakers, successful professionals. They are equal partners in all walks of life; they share the same experiences as their male counterparts and should therefore never be at a position of disadvantage. This is our vision, and to achieve it all of us – men and women – must embed the principles of equity and partnership in our homes and within our values of upbringing. By doing so, we will create young advocates of social justice and gender parity who will engage with society and at the workplace in the right way and create a vibrant and continuous culture that upholds these noble principles”.

“The theme of this conference ‘Drivers of Change’ warrants it global relevance. The 17 organisations who took the NAMA Pledge during WEEGS 2017 to enforce specific initiatives to enhance women’s contributions within workplace and society are living examples of drivers bringing about effective change in the society.

“The benefits of their efforts, however, did not leave their premises in Sharjah and I believe that this summit has brought us together again to create global impact. In several countries, women’s realities could be significantly improved with strong direction and financial support. Thus, on behalf of WEEGS and Sharjah, I announce that I will sponsor the implementation of women’s economic empowerment programmes spearheaded not only by Sharjah-based institutions, but by entities worldwide” Sheikh Sultan further added.

“We all have a responsibility to maximise the outreach of empowerment efforts worldwide, especially in places where women suffer the gravest hardships. In Asia, Africa or Latin America, for instance, a sizeable percentage of girls and women are deprived of basic health care. This is why, we must go beyond the Arab world to extend our support to women around the world where they need us the most. I hereby pledge to sponsor global efforts to support women’s economic empowerment, and particularly in Africa, Asia and Latin America, where women need us to be by their side,” the Sharjah Ruler concluded.

We strive to change this culture, which allows the 23% gender pay gap to exist

For her part, Reem BinKaram, Director of NAMA, said: “In Sharjah, we believe that women’s economic empowerment is synonymous with inclusive community development. This is what His Highness the Ruler of Sharjah has taught us, and what his wife, Her Highness Sheikha Jawaher bint Al Qasimi, has been promoting for decades.”

“This summit not just looks at defending women’s rights; we are all here to stimulate action towards changing the existing culture entrenched in families, societies, educational entities, governments and private corporations that allows or ignores gender inequity. Doing this will entail, first, recognising and believing in women’s capabilities, followed by stronger legislation and policies, better education and professional opportunities,” she added.

“The International Labour Organization (ILO) says it will take more than 200 years to achieve gender equity and bridge the pay gap. We cannot wait that long if we aspire to succeed in both economy and society – if we were to reduce poverty, establish peace and secure a more sustainable future for generations to come”. Putting her words within an achievable context, BinKaram cited the UAE’s and Sharjah’s experience, saying: “It is not a question of time, but a question of faith, willingness, planning and continued, dedicated engagement to better women’s status.” 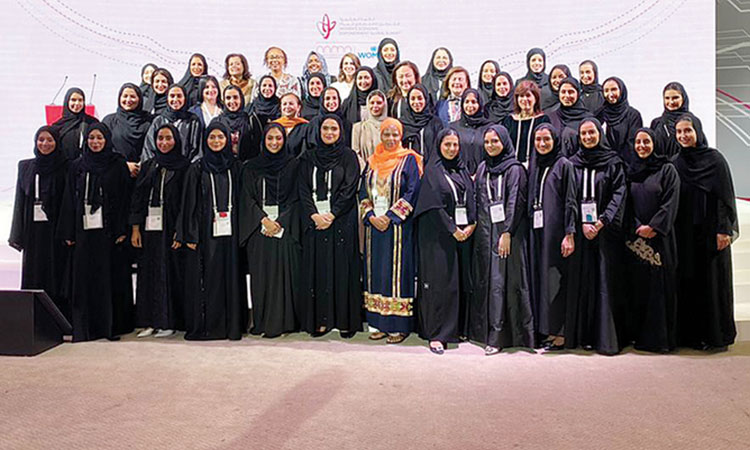