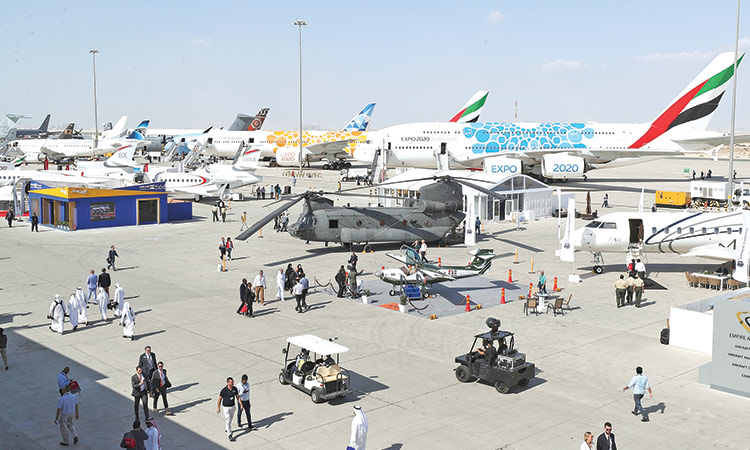 The UAE’s Ministry of Defence signed 15 deals at a total value of more than Dhs3 billions on the third day of Dubai Airshow 2019, a senior official said on Wednesday.

In a press briefing, Major-General Pilot Abdullah Al Sayyed Al Hashemi, Assistant Under-Secretary of the Ministry of Defence for Support Services, said on Day Three of the Dubai Airshow 2019, now running at the Dubai World Central, that 15 deals were signed with a total value of Dhs3 billions.

Here is the list of the signed agreements released by the GHQ of the UAE Armed Forces:  Contract with MBDA France to provide maintenance of ammunitions for Mirage 2000 aircraft for a value of Dhs1,281,400,000.

Meanwhile, the UAE announced it intention to buy 24 B-250 light attack aircraft to strengthen air support for its Air Force and Air Defence from aerospace company Calidus.

Major-General Ishaq Saleh Al Blooshi, Deputy Executive Director of the Military Committee of Dubai Airshow 2019, confirmed at the show daily briefing that the deal is in sync with the leadership’s vision to provide the Armed Forces with the most sophisticated capabilities.

He said the contract, worth Dhs 2.273 billion including spare parts and technical supports.

Separtely, Emirates Airlines, the world’s largest international airline, today revealed that the value of the firm order it placed for 50 A350-900 XWB aircrafts is worth $16 billion (Dhs58.7 billion) at list prices at the Dubai Airshow 2019.

Powered by Rolls-Royce Trent XWB engines, delivery of the first Emirates A350 XWB is expected in May 2023, and will continue until 2028.

This purchase agreement replaces the heads of agreement signed in February where Emirates announced its intent to purchase 30 A350s and 40 A330Neos.

Sheikh Ahmed said, “Today, we are pleased to sign a firm order for 50 A350 XWBs, powered by Rolls-Royce Trent XWB engines. This follows a thorough review of various aircraft options and of our own fleet plans. It is Emirates’ long-standing strategy to invest in modern and efficient aircraft, and we are confident in the performance of the A350 XWB.

“Complementing our A380s and 777s, the A350s will give us added operational flexibility in terms of capacity, range and deployment. In effect, we are strengthening our business model to provide efficient and comfortable air transport services to, and through, our Dubai hub.” Sheikh Ahmed added, “This US$16 billion deal reflects our confidence in the future of the UAE’s aviation sector, and is a strong affirmation of Dubai’s strategy to be a global nexus connected to cities, communities and economies via a world-class and modern aviation sector.”

The signing between two of the UAE’s aerospace giants, agreed during the Dubai Airshow 2019, sets a new milestone in the UAE’s future MRO landscape by establishing collaborative groundwork for the delivery of world-class MRO services through shared knowledge and a strong heritage in aviation excellence. Sanad and EEMC have a combined experience of over 60 years, and the collaboration will create aero-engine centres of excellence, dedicated repair and training capabilities, and knowledge sharing and technology collaboration.