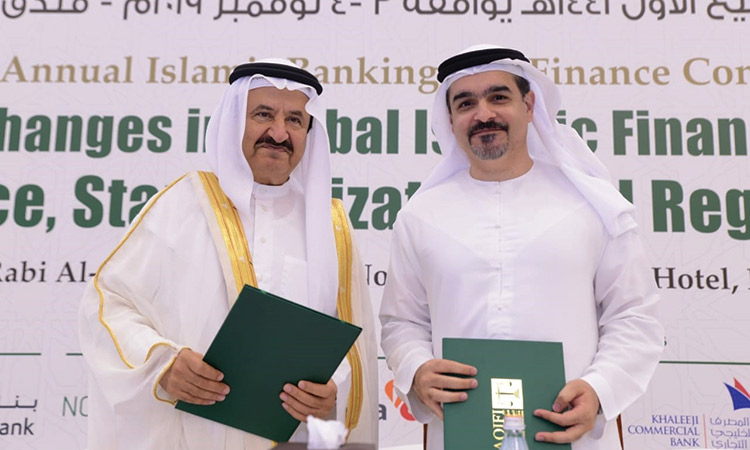 Dubai Islamic Economy Development Centre (DIEDC) and the Accounting and Auditing Organization for Islamic Financial Institutions (AAOIFI) have signed a memorandum of understanding (MoU) to explore the latest developments, risks and challenges in Islamic finance.

The signing ceremony was the highlight of the AAOIFI-World Bank 14th Annual Conference.

Organised by AAOIFI in cooperation with the World Bank, the two-day event ran from Nov.3 to 4 in Bahrain under the theme ‘Revolutionary Changes in Global Islamic Finance Ecosystem: Need for Governance, Standardisation and Regulatory Support’.

Under the agreement, the two parties aim to conduct joint capacity-building programmes related to the Accounting and Auditing Organization for Islamic Financial Institutions standards in various jurisdictions, especially in markets new to Islamic banking and finance.

Dubai Islamic Economy Development Centre and the Accounting and Auditing Organization for Islamic Financial Institutions also seek to facilitate the exchange of information, host events focused on areas of mutual interest, and promote their activities to their members and wider networks.

In his speech at the conference, Abdulla Mohammed Al Awar, CEO of DIEDC, said: “The partnership between our two entities will significantly serve the Islamic finance sector, thanks to our shared objectives of promoting sustainable growth and paving the way for the next phase of development and prosperity.”

On this occasion, Omar Mustafa Ansar, Secretary General of AAOIFI, said: “AAOIFI is pleased to sign this MOU with DIEDC. We hope together we will be able enhance awareness on the standards issued by AAOIFI for the development of the Islamic finance industry globally.  “Such efforts will reinforce the role of Islamic finance as the most efficient and effective means to drive the growth and globalisation of the Islamic economy while positioning Dubai as its capital.”

In closing, Abdulla Al Awar said: “We have noted a strong belief among industry experts - given sharia’s unified global legal and regulatory framework, sharia harmonisation is the optimal method to fast-track the development of Islamic finance that can help resolve one of the critical challenges faced by the sector - inconsistency in certification and procedures.”

Meanwhile under the directives and patronage of His Highness Sheikh Mohammed Bin Rashid Al Maktoum, Vice President, Prime Minister and Ruler of Dubai, the fifth edition of the Global Islamic Economy Summit (GIES 2020) held on Nov.9 and 10, 2020, that took place on the sidelines of the Expo 2020 Dubai, the first World Expo ever to be hosted in the Middle East, Africa, and South Asia region.

The GIES is organised every alternate year by the DIEDC in collaboration with the Dubai Chamber of Commerce and Industry and Refinitiv. Through highlighting the role of Islamic economy in improving standards of living and promoting sustainable economic development.

Sheikh Hamdan Bin Mohammed Bin Rashid Al Maktoum, Crown Prince of Dubai, Chairman of Dubai Executive Council, and General Supervisor of the Dubai: Capital of Islamic Economy initiative, said, “Including the fifth edition of the GIES alongside Expo 2020 Dubai supports the vision of His Highness Sheikh Mohammed Bin Rashid Al Maktoum, to establish Dubai as the global capital of the Islamic economy. Eminent personalities and decision-makers from around the world will gather in Dubai next year to redefine the global economic landscape and the Islamic economy will play a crucial role through this landmark summit in convening key stakeholders.”