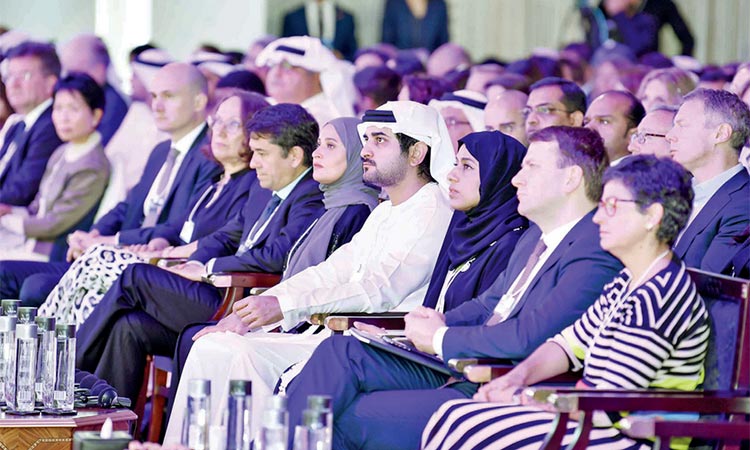 Sheikh Maktoum Bin Mohammed and other officials attend the opening session of the Global Future Councils in Dubai on Sunday. WAM

Sheikh Maktoum Bin Mohammed Bin Rashid Al Maktoum, Deputy Ruler of Dubai, attended the opening session of the Fourth Meeting of the Global Future Councils hosted by the UAE government in collaboration with the World Economic Forum. More than 700 world-leading officials, futurists and experts convene in 41 future councils to design innovative solutions for the future challenges in vital sectors.

In his opening remarks, Mohammad Al Gergawi stated that His Highness Sheikh Mohammed Bin Rashid Al Maktoum, Vice President and Prime Minister of the UAE and Ruler of Dubai, has placed a great passion in the future of all sectors in the UAE, through his vision that cultivates a culture of proactive thinking in the UAE community.

Al Gergawi said that the future councils will feature plenty of questions that need answers to help governments, decision-makers and international organizations globally to understand the future and respond to its challenges. Such questions tackle the future financial systems, digital economy, geopolitics, world trade and investments, jobs, entertainment, education, transport, energy, and the Internet of Things.

Al Gergawi addressed three particular questions that need to be answered for a more stable, safe and happy future. The first question tackles the Fourth Industrial Revolution and whether it increased or decreased the gap between rich and poor societies. The second question addresses the level of trust in companies, governments, media and other institutions. And the third question is related to governments and the impact of the Fourth Industrial Revolution and emerging technologies on building or destroying bridges between people and their governments.

Al Gergawi concluded that the UAE has established a Center for the Fourth Industrial Revolution in collaboration with the World Economic Forum to develop a global ethical framework for this technological revolution and to help other governments understand and benefit from its digital tools.

Borge Brendi, the President of the World Economic Forum, stated that climate change, polarisation, trade wars, the looming recession and geopolitical tensions are straining societies and risk the prospects of future generations. However, a cohesive, peaceful and sustainable world is possible.

He added that the recommendations of the councils inform the WEF’s work on topics that range from cybersecurity, biodiversity, artificial intelligence, quantum computing, education and work to the state of the financial system, mental health, cities and urbanization, and geopolitics.

Brendi concluded that the world’s problems are increasingly integrated but the response to them is increasingly fragmented. “We have to realise that we are living in a truly globalised world where we have shared problems and have to act accordingly.” he said.

As part the Annual Meeting of the Global Future Councils, the UAE government organizes Special Strategic Sessions, Minister’s Chat, and Dialogue of the Future to discuss the future of skills, medicine and genome, environment and sustainability.

The Annual Meeting of the Global Future Councils brings together members from government, business, academia, and civil society to promote innovative thinking and address the regional and global challenges related to cross-cutting topics, including the global financial system, geopolitics, the Fourth Industrial Revolution (4IR), cities and urbanization, cybersecurity, the bioeconomy, and many others.

The meeting was attended by Mohammed bin Abdullah Al Gergawi, Minister of Cabinet Affairs and the Future and Co-Chairman of the Global Future Councils.

During the meeting, both sides discussed ways of expanding the cooperation between the UAE and the forum, to support global sustainability and future industries.

Sheikh Maktoum also highlighted the keenness of the UAE and Dubai to advance their strategic ties with the forum, as well as international organisations and countries interested in creating a better future, noting that this embodies the vision and directives of the Vice President, Prime Minister and Ruler of Dubai, His Highness Sheikh Mohammed Bin Rashid Al Maktoum, to promote partnerships between the public and private sectors, entrepreneurs, creative minds and innovators from around the world related to future sectors that are relevant to the lives of people.

Brende praised the future vision of the UAE’s leadership, as well as Dubai’s efforts to participate in international efforts and initiatives to achieve sustainability.