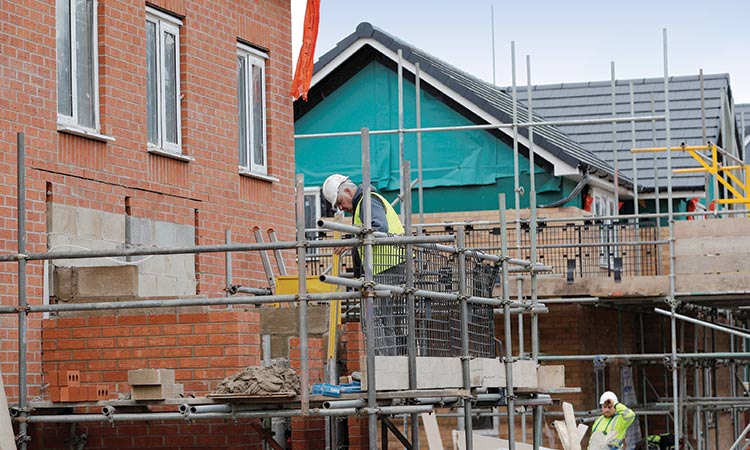 A modular home under construction in Coventry, UK. Reuters

The IHS Markit/CIPS construction Purchasing Managers’ Index (PMI) plunged to 43.1, the lowest reading since April 2009 when the country was gripped by the global financial crisis and way below any forecast in a Reuters poll of economists.

The yield on 10-year British government bonds sank to its lowest level in nearly three years as investors, already anxious about the prospect of a no-deal Brexit under the country’s next prime minister, took fright at the scale of the fall.

Construction accounts for only 6% of Britain’s economy and economists say the PMI surveys can overstate the degree of turning points in gross domestic product.

But there have been other signs that overall activity has stalled, and possibly even contracted, in the second quarter.

On Monday, a PMI for Britain’s manufacturing sector, which represents 10% of the economy, also showed a fall in activity in June as the global economic slowdown hit demand for exports, adding to the drag from Brexit worries.

Bank of England data meanwhile revealed the slowest growth in five years in borrowing by consumers, whose spending has helped cushion the economy from Brexit.

Samuel Tombs, an economist with consultancy Pantheon Macroeconomics, said the construction survey was “a worrying sign that the damage wrought by Brexit uncertainty is building”.

The hit was felt across the breadth of the sector: homebuilding shrank for the first time in 17 months, commercial work fell for the sixth consecutive month and civil engineering contracted by the most since October 2009.

Shares in UK housebuilders Persimmon, Taylor Wimpey and Barratt Developments all fell while the broader UK stock market was up.

Tim Moore, associate director at IHS Markit, said it was “almost impossible to sugarcoat” the survey.

“In particular, new orders dropped to the largest extent for just over 10 years, while demand for construction products and materials fell at the sharpest pace since the start of 2010,” he said.

There was one potential silver lining: job cuts were marginal and some firms said they had retained staff in anticipation of a recovery in sales. Tombs at Pantheon Macroeconomics said the sector could experience a quick recovery around the turn of the year, if the Brexit deadline of Oct. 31 is delayed again.

In campaigning for the leadership of the ruling Conservative Party, both candidates to replace Theresa May as prime minister have said they are prepared to take the country out of the European Union without a transition deal if necessary.

The second-quarter slowdown in the economy contrasts with a strong start to 2019, when companies rushed to get ready for the original March 29 Brexit deadline.

A PMI for Britain’s dominant services sector, which is due to be published on Wednesday, is expected to show only marginal growth in June, according to economists polled by Reuters.

House prices increased by 0.5% compared with a year ago, slowing slightly after a 0.6% rise in May but in line with the median forecast in a Reuters poll of economists.

At the time of the Brexit referendum in 2016, house prices were growing by about 5 per cent a year, according to Nationwide’s measure. In monthly terms, house prices in June edged up by 0.1%, a slightly smaller increase than the median forecast in the Reuters poll for a rise of 0.2%.

Nationwide’s data chimed with other housing indicators which have suggested that a weakening of the market seen in 2018 might have bottomed out as investors wait for Britain to resolve its Brexit crisis.

“While healthy labour market conditions and low borrowing costs will provide underlying support, uncertainty is likely to continue to act as a drag on sentiment and activity,” Robert Gardner, Nationwide’s chief economist, said.

Price growth and transaction levels were likely to be little changed over the coming months, he said.

Britain is waiting for the ruling Conservative Party to choose its new leader who, as next prime minister, will attempt to strike a new Brexit deal with the European Union before an Oct.31 deadline for the country’s departure from the bloc.

Nationwide’s data showed that prices in London fell for an eighth quarter in a row in the April-June period although the pace of decline moderated to 0.7% in annual terms from 3.8% in the previous quarter.