Global stocks take a hop as US eases Huawei restrictions 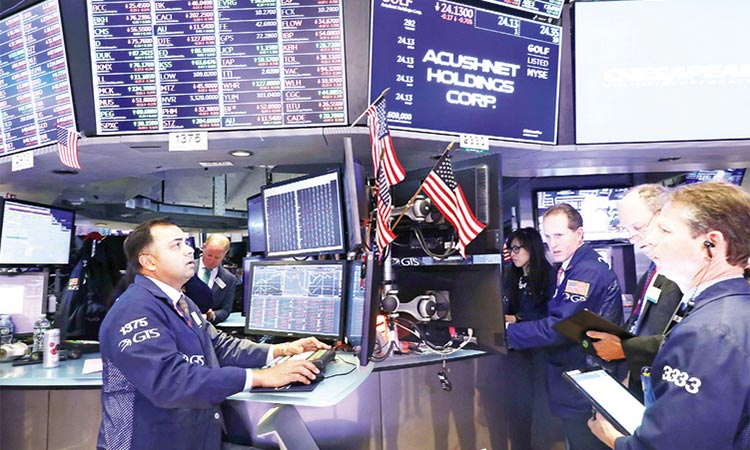 Traders work on the floor of the New York Stock Exchange on Tuesday. Agence France-Presse

“The Huawei extension is in some sense providing a relief rally as it eases the worst fears of market participants that we are drifting towards a fully fledged trade war,” said Aberdeen Standard’s head of global strategy, Andrew Milligan.

Chipmakers AMS, STMicroelectronics and Germany’s Infineon added between 2% and 6%, while the tech sector rose 1.6% after losing almost 3% on Monday.

In London, heavyweights HSBC, Prudential and Standard Chartered boosted the blue-chip index as markets rose on hopes of an easing in the trade tensions.

The MSCI index of world shares, which tracks shares in 47 countries, was up 0.1% after losses in the two previous days.

“We still believe some kind of deal will eventually be reached - most likely at a Xi/Trump meeting at the G20 Summit in late June.” In Germany, Daimler gained 1.1%, getting an additional boost after German newspaper Handelsblatt reported the company was looking to cut administration costs by 20%. Daimler declined to comment.

Italy’s biggest phone group Telecom Italia led gainers on the STOXX 600, rising 1.9%, after posting first-quarter earnings in line with expectations and confirming its guidance for the next three years.

Markets now await Wednesday’s release of minutes from the US Federal Reserve’s May 1 meeting, looking for signals on future interest rates after Chair Jerome Powell said on Monday that it was premature to ascertain the impact of trade and tariffs on the trajectory of monetary policy.

POUND SLIPS In currency markets, the British pound fell below $1.27 for the first time since mid-January, hit by dollar strength and expectations that Prime Minister Theresa May will fail to persuade cabinet colleagues to back an amended version of her Brexit withdrawal deal.

The US dollar rose to 2-1/2 week highs, supported by some safe haven inflows, while Australia’s top policymaker Philip Lowe said on Tuesday the central bank would consider the case for lower interest rates at its June policy meeting, pushing the Aussie dollar lower by half a per cent to $0.6873.

Government bond yields in much of the eurozone stabilised above recent multi-year lows as investors remained cautious about selling fixed income against a backdrop of trade tensions and economic growth concerns.

Brent crude futures, the international benchmark for oil prices, were at $72.31 per barrel at 1030 GMT, up 34 cents, or 0.5%, from their last close. (Reporting By Tom Arnold Editing by Gold holds near two-week low as dollar and equities rise * Fall below $1,266 could trigger further dip in gold -analyst * Fed minutes due on Wednesday * Dollar index near one-month high (Adds fresh comments, updates prices) By Brijesh Patel May 21 (Reuters) - Gold fell on Tuesday, hovering near a more than two-week low touched in the previous session, as the dollar strengthened and improved risk appetite took the sheen off bullion ahead of the release of minutes from the US Federal Reserve’s latest policy meeting.

“Right now the only safe-haven out there seems to be the dollar, which has been moving higher against most currencies,” said Saxo Bank commodity strategist Ole Hansen.

“Also, there has been a slight improvement in the outlook for the stock markets after the US decided to provide Huawei with a 90-day reprieve.” Both factors were weighing on gold, he added.

The dollar index rose to its strongest in nearly a month, boosted by higher US yields and as fears of the economic fallout from the U.S-China trade row prompted investors to choose the safety of the US currency over bullion.