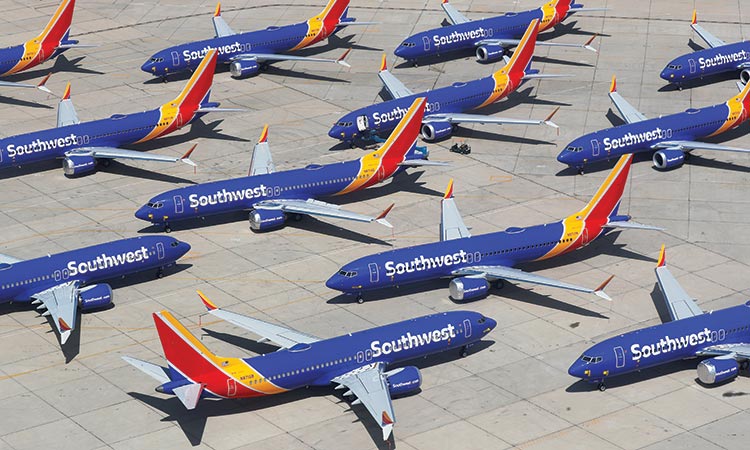 Grounded Boeing 737 MAX planes at Victorville Airport in US. Reuters

Once global regulators clear Boeing Co’s 737 MAX to fly again after deadly crashes, airlines, which have put their fleets into mechanical hibernation since March will scramble to begin the biggest ungrounding effort in history.

Quickly reintegrating Boeing’s 737 MAX, a fast-selling model because of its fuel efficiency, longer range, and passenger capacity, is crucial for optimizing airlines’ routes and improving margins after having to cancel thousands of flights.

Global airlines have warned of a major hit to profits due to the mid-March grounding of the MAX following two fatal crashes.

International regulators are meeting on May 23 to review Boeing software and training plans, though doubts remain over how quickly foreign authorities will clear new flights.

In the United States, following regulatory approval of a Boeing software fix and new training, airlines will have to run through an FAA-approved checklist, industry officials say.

Such work, which will vary by operator, includes cycling the engines, changing and filling fluids, removing covers from the engines and running routine electrical and hydraulics checks.

Each airline will also have to upload Boeing’s new software for an anti-stall system implicated in the crashes and complete additional pilot training. Jason Goldberg, spokesman for the Allied Pilots Association, said it will take about a week to prepare American Airline Group’s MAX fleet to fly, not counting the extra training.

“While the planes are in storage there is of course maintenance that can be done. But as far as steps to put it back into service, none of the work is going to be done until the aircraft is cleared to fly.”

Airlines likely halted standard daily systems checks while the planes were in storage, said one former Boeing test pilot. Similar to a modern car, when mechanics restore power to the aircraft, built-in testing equipment runs checks on sensors gauging the health of aircraft systems from hydraulics and to fuel - known as a ‘BITE’ test - that would signal failures.

Another issue is pilot training.

Boeing said on Thursday it was in the process of submitting a plan on pilot training to the US Federal Aviation Administration (FAA) for approval, after which each airline will develop its own FAA-approved training programme.

“If it’s computer-based training, that won’t be difficult to deploy. The pilots can do it at home,” he said.

A draft report by an FAA-appointed board of pilots, engineers and other experts concluded that pilots only need additional computer-based training, rather than simulator time, though other regulators and some pilot groups have argued for more.

Southwest and American have scheduled MAX flights as of Aug. 6 and Aug. 20 respectively. If the jets are not cleared to fly by then, the airlines will be forced to again cancel more than 100 daily flights.

Boeing said on Thursday it had completed a software update for its 737 MAX jets, which have been grounded worldwide since March after they were involved in two fatal crashes.

The planemaker said it was in the process of submitting a plan on pilot training to the US Federal Aviation Administration (FAA) and would work with the regulator to schedule its certification test flight.

The FAA is planning a meeting on May 23 in Fort Worth, Texas, with regulators from around the world to update them on reviews of Boeing’s software fix and on pilot training.

Aviation regulators from other countries will have to assess Boeing’s proposed fixes and clear the aircraft to fly in other regions independently of the FAA.

It is unclear when the 737 MAX aircraft will return to service, but US airlines have said they hope the jets will fly this summer.

Southwest Airlines Co and American Airlines Group, the two largest US operators of the MAX, have pulled the jets from their schedules until Aug. 5 and Aug 19, respectively.

The airlines, which must still decide on pilot training, have said they would use the jets as spare planes if they are approved for flight before those dates.

The FAA said on Thursday that Boeing had not yet submitted its final software package for approval. On Wednesday, acting FAA Administrator Dan Elwell said he expected Boeing to make its formal submission for its software update in the next week or so.