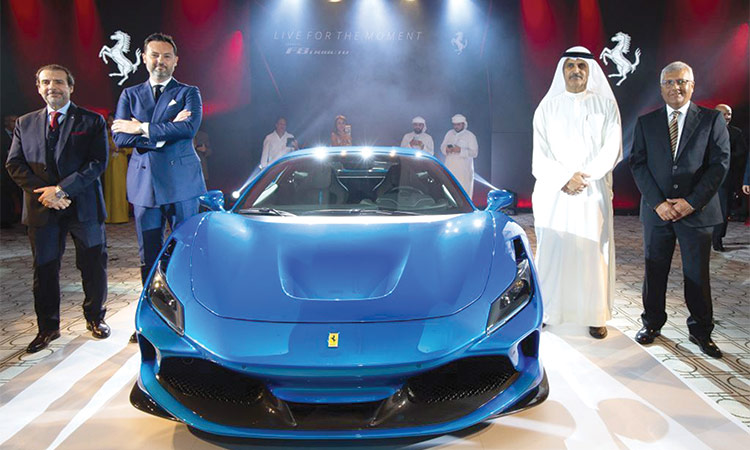 Officials during the launch of the new car in Dubai.

The F8 Tributo is the new mid-rear-engined sports car that represents the highest expression of the Prancing Horse’s classic two-seater berlinetta. It is a car with unique characteristics and, as its name implies, is an homage to the most powerful V8 in Ferrari history.

Speaking at the launch, Raid Abusitta, Vice-President – Sales, Ferrari at Al Tayer Motors said; “The Ferrari F8 Tributo has made waves internationally since images of the car were unveiled ahead of its official launch at the Geneva Motor Show. Interest in the car has been very strong and we look forward to seeing the car join the many Prancing Horse models in the UAE.”

The F8 Tributo sets the market benchmark for performance, driving pleasure and ease of handling. It makes the exhilarating performance of the best 8-cylinder in the world accessible to all drivers, with unprecedented handling and superior ride comfort.

With a massive 720 cv and a record specific power output of 185 cv/l, it is the most powerful V8 ever to be mounted in a non-special series Ferrari, achieving new heights not just for turbos, but for engines across the board.

The turbo-charged V8 has already been used in other models in the range with various power output levels, winning “Best Engine” in the International Engine of the Year awards three years running in 2016, 2017 and 2018. In 2018, it was also awarded the title of the best engine of the last two decades.

The F8 Tributo delivers its 720 cv without the slightest hint of turbo lag and produces an evocative soundtrack.