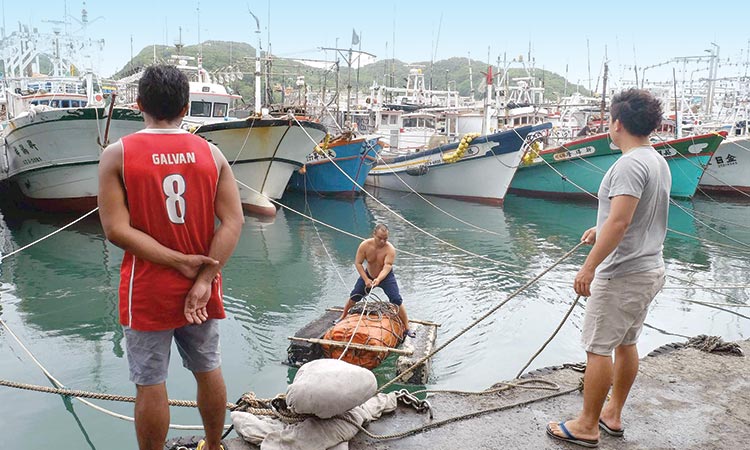 A fisherman navigates a raft near boats filling the Patoutzu Fishing Harbour in Keelung, Taiwan. Reuters

Taiwan’s export orders fell for the fifth straight month in March, and at a much sharper pace than expected, as the island’s manufacturers kept struggling with a drop in global tech demand.

Orders in March dropped 9 per cent from a year earlier to $38.59 billion, Ministry of Economic Affairs data showed on Monday.

For January-March, export orders slid 8.4 per cent, the biggest annual drop for a first quarter since 2009 when they tumbled 30 per cent, the ministry said.

March orders fell at almost twice the 5.45 per cent forecast in a Reuters poll, though the pace was less than February’s 10.9 per cent, the sharpest fall in nearly three years.

Taiwan’s hi-tech factories are major suppliers for global tech heavyweights such as Apple Inc and Qualcomm, and the continued drop in orders suggests global electronic could remain soft for some time.

The ministry said the March shrinkage was also due to declining machinery orders due to business caution in China as the US-Sino trade dispute continues.

However, launches of smartphone models and demand for new technology such as artificial intelligence and 5G could support a rebound of orders for electronics in coming months, it said.

The faster 5G networks are coming on line in the United States, China, South Korea and other places this year, but probably will not be widespread until 2020. The telecommunications industry is expected to spend $275 billion over seven years in the United States alone, according to Accenture estimates.

Carl Liu, an analyst at KGI Securities, said Taiwan export orders “are unlikely to return to growth until in June, thanks to re-stocking of electronics ahead of the peak season in the third quarter”.

The ministry said it expects April export orders to decline 6.7-9.2 per cent, and that it could be July before orders rebound.

“We remain cautious about orders in the first half and expect a year-on-year decline for the second quarter,” ministry official Lin Lee-jen said.

But the company gave an upbeat forecast for the coming months, betting on rising chip demand thanks to a rollout of 5G mobile network. In March, weak export demand was seen from all Taiwan’s major markets. Orders from the United States fell 9.7 per cent on-year, on top of February’s 5.5 per cent decline.

Those from China dropped 13.7 per cent, compared with a fall of 14.3 per cent the previous month, while orders from Europe slipped 2.4 per cent. Japan orders declined 5.8 per cent.

Taiwan’s government in February trimmed its 2019 economic growth forecast to 2.27 per cent, citing growing uncertainties over global growth.  In February, Taiwan’s export orders fell 10.9 per cent, the most in nearly three years due to cautious machinery orders from China as the United States-China trade dispute wears on, pointing to a further slowdown for the island’s economy.

Taiwan export orders are an indicator of demand for Asia’s hi-tech gadgets, and typically lead actual exports by two to three months.

The US-China trade war has hit Taiwan’s manufacturing, exports and the demand for new smartphones, and fiscal and monetary policy can only do so much to help drive the recovery. 5G equipment production could provide some support, but before that happens weaker corporate earnings may lead to capital outflows and a softer currency Taiwan’s economy is a small and open one, which is why the export sector is important to its manufacturing and related service industries such as ports and logistics. But since mid-2018, the external environment has turned negative for Taiwan.

The government has taken up the main role in supporting the economy and will probably increase spending by 2.8 per cent to TWD 2.022 trillion in 2019, which will be around 11 per cent of nominal GDP. This includes raising infrastructure spending and giving rebates to consumers on energy-saving automobiles.

As you can see in the chart below, historically, fiscal spending can only support the economy for so long. For example, government spending in 1Q16 couldn’t prevent GDP growth from falling below zero in annual terms, and it wasn’t until export growth rebounded in 3Q16, the economy picked up momentum. So in light of that, we believe, the economy still needs to see a bounce back in exports to see faster economic growth.