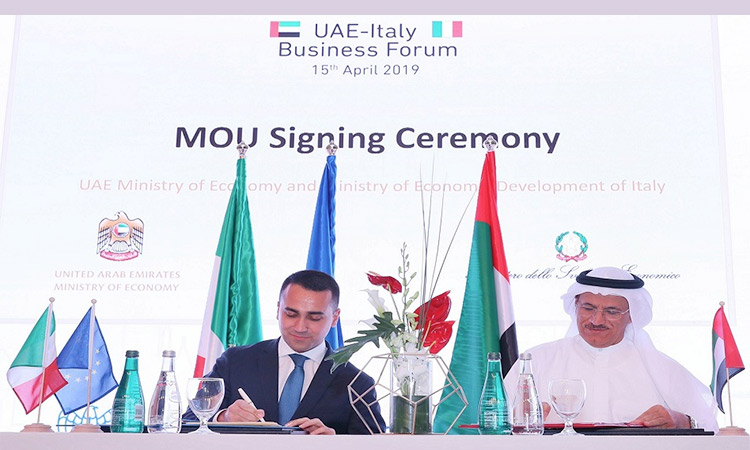 The forum was organized by the Ministry of Economy in cooperation with the Italian Embassy in the UAE, the Dubai Chamber of Commerce and Industry, and several businesses and investment entities in Italy. The forum is part of the Italian delegation›s official visit to the UAE under the chairmanship of H.E Luigi Di Maio, with the participation of senior officials of the Italian government and representatives from around 200 Italian companies, investment and trade agencies in Italy.

During the forum, both parties discussed ways on how to increase trade, cooperation and exchange of experiences in the fields of innovation, small and medium enterprises (SMEs), explore partnership opportunities and the exchange of knowledge in the sectors of technology, infrastructure, renewable energy and advanced industries, with a focus on enhancing private sector opportunities in developing the partnership. On the sidelines of the forum, two Memorandums of Understanding (MoUs) were signed in the fields of innovation, SMEs, Start-ups and the circular economy.

Eng. Sultan Bin Saeed Al Mansoori opened the forum by pointing out the strong trade and economic relations of the UAE and the Republic of Italy across a wide range of sectors. The forum represents an important platform to further enhance cooperation, exploring opportunities and identifying new areas of partnership in the next stage of their relationship.

He added that the trade exchange figures between the two countries reflect its strong economic ties. The total volume of non-oil trade between the two countries in 2017 amounted to more than $7.8 billion and exceeded $5.7 billion in the first nine months of 2018, with a growth of 7.7 per cent in the country›s exports to Italy, as compared to the same period in 2017. He pointed that the UAE is the largest Arab trading partner of Italy, while Italy is the fourth largest European partner of the UAE and the second largest exporters from Europe, according to data in 2017.

He also stressed on the importance of cooperation between the two sides, particularly across innovation, technology and advanced industries, which served as the main axes in the UAE Vision to build a future economy--focusing on the importance of joint ventures and exchange of experiences in new areas such as smart cities, technological sciences, water solutions and renewable energy

For his part, Luigi Di Maio,  Deputy Prime Minister and Minister of Economic Development, Labour and Social Policies of Italy, said that the Italy is keen towards further strengthening its partnership with the UAE across various economic and developmental fields. He pointed that the organization of the business forum, which saw wide participation of Italian companies from different sectors, is an important opportunity to move the ties of cooperation between the two countries to a new stage.

He added that the Italian government is currently focusing on reinforcing partnerships in innovation and increasing exports to business partners, pointing out that the UAE has a strong economy and high potential.  De Maio explained that Italy›s economy is rich today in many vital sectors such as renewable energy, infrastructure and real estate investments, as well as the Italian government is focused on supporting start-ups in the country and increasing investment in innovation.  Hamid Mohammed Bin Salem, Secretary General, Federation of UAE Chambers of Commerce and Industry, pointed out that the forum reflects the desire of officials and business owners from the two countries to promote joint cooperation and discuss opportunities and areas of partnership in light of the strong bilateral and economic relations between UAE and Italy.

Hamad Buamim, President and CEO, Dubai Chamber, said that the UAE and Italy share strong economic relationship, adding that this forum is an exceptional opportunity to develop and enhance the countries’ bilateral ties. He noted that the Italian Business Council, which operates under the umbrella of the Chamber, plays an integral part in supporting the economic relations between the two business communities.

Buamim revealed that non-oil trade between Dubai and Italy has increased steadily in recent years—reaching around Dhs 24 billion in 2018, with a growth of 6.6 per cent as compared to 2017. He added that Italy ranked 17th place in Dubai’s top list of trading partners in 2018. He noted that Expo 2020 Dubai will present lots of opportunities for mutual cooperation, specifically in key sectors including energy, water, information technology, infrastructure and innovation.