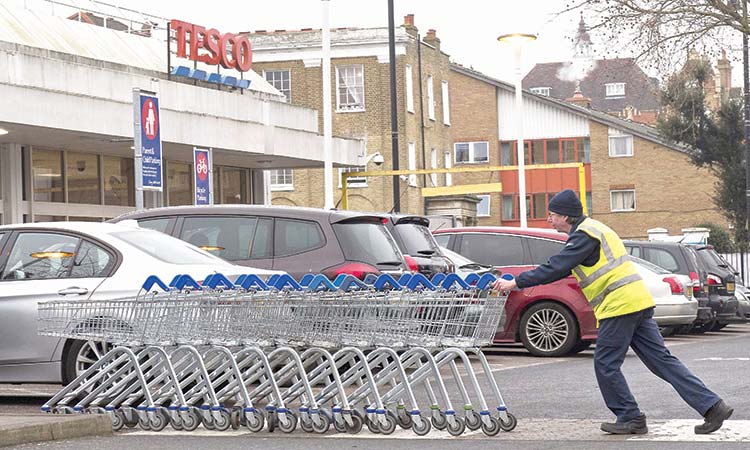 A worker pushes trolleys in the car parking lot at a branch of Tesco in south London. Agence France-Presse

Britons have carried on spending despite their “Brexit fatigue,” Tesco said on Wednesday, as a forecast-beating rise in profits confirmed a turnaround at Britain’s biggest retailer.

Celebrating its 100th year, Tesco is deep into a recovery plan under Chief Executive Dave Lewis after a 2014 accounting scandal capped a dramatic downturn in its fortunes.

“After four years we have met or are about to meet the vast majority of our turnaround goals,” the former Unilever executive said. “I’m very confident that we will finish the job this year.”

Operating profit jumped 34 per cent to 2.21 billion pounds ($2.89 billion) for the year ended Feb. 23, while the company declared a dividend of 5.77 pence per share, up 92 per cent. Group sales rose 11.5 per cent to 56.9 billion pounds and Tesco recorded its 13th quarter of like-for-like sales growth in its main UK market with a 1.7 per cent rise in the final quarter.

The operating profit margin was 3.79 per cent in the second half, excluding Tesco’s acquisition of wholesaler Booker, Lewis said, “comfortably within” the 3.5-4.0 per cent target range set for this financial year. The 2018-19 results reflected revamped relationships with suppliers, lower prices versus major competitors, simplified and better quality product ranges and improved store standards.

Lewis said customers had responded well to the company’s “Exclusively at Tesco” brands, with 84 per cent of them trying the products.

The improvements have helped Tesco steer a steady course through a period of industry turmoil, as the country prepares to leave the European Union and as Tesco’s two biggest competitors try to merge to become the new industry number one.