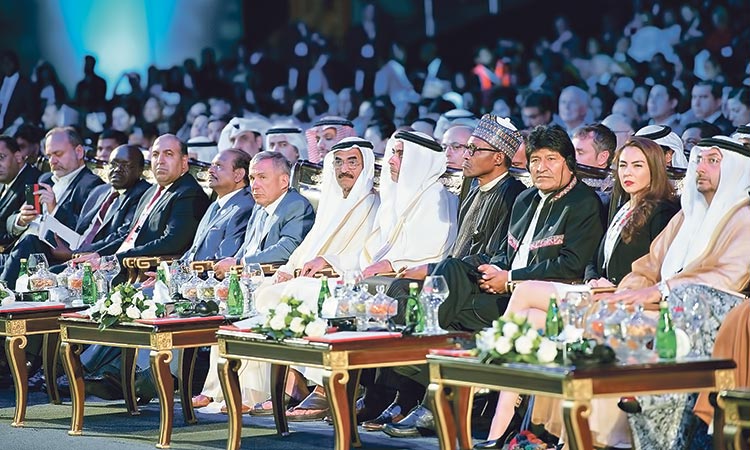 Under the patronage of His Highness Sheikh Mohammed Bin Rashid Al Maktoum, UAE Vice President and Prime Minister and Ruler of Dubai and in the presence of Sheikh Saif Bin Zayed Al Nahyan, Deputy Prime Minister and Minister of Interior, the Annual Investment Meeting (AIM) 2019 opened on Monday. The 9th edition of the world’s biggest platform for foreign direct investment (FDI) will run until 10th of April in Dubai under the theme ‘Mapping the Future of FDI: Enriching World Economies through Digital Globalization’.

In his opening speech, Dr Abdullah Bin Mohammed Belhaif Al Nuaimi, Cabinet Member and Minister of Infrastructure Development said, “We are delighted to welcome all of you to the opening ceremony of the ninth edition of the Annual Investment Meeting. The forum, organised by the Ministry of Economy, has become a prominent event on the regional and international arenas as one of the largest investment gatherings in the world. We are honored by the wide global participation in this year›s edition, which includes delegations from more than 140 countries from around the world, who have gathered here to jointly explore the latest trends in foreign direct investment, as well as to exchange experiences and knowledge, explore business opportunities, and sign cooperation agreements and partnerships. As this edition of the Meeting coincides with the Year of Tolerance in the UAE, this platform also presents us with another opportunity to emphasize the value of tolerance and its importance in promoting joint efforts that are essential for productive partnerships and development.”

He further stated that the outlook for the future remains optimistic, given the 3.7 per cent global economic growth experienced in 2018 and with the International Monetary Fund estimating that the world economy will continue to grow in 2019 by 3.5 per cent.

“At the national level, the UAE continues to rank first in the region in terms of FDI inflows, which in 2018 amounted to $10.4 billion according to the Central Bank of UAE estimates. For the past six consecutive years, the UAE has been leading the Arab countries in the ‘Ease of Doing Business Index.’ IMF maintains positive economic forecasts in this regard, as the country›s GDP growth is estimated at 3.7 per cent this year,” added Dr Abdullah bin Mohammed Belhaif Al Nuaimi.

“The UAE has paid great attention to the development of infrastructure and roads, being aware of its importance in promoting investments. The country has also been able to achieve internationally high rankings on global competitiveness indicators in this domain. These include second place in the satisfaction with streets and highways, which constitute one of the best infrastructures in the world. Furthermore, the UAE has accomplished some prestigious achievements through successful partnerships between the public and private sectors in the area of infrastructure projects, reflecting the importance of joint endeavors by both sectors and attracting more investors,” stated Dr Abdullah bin Mohammed Belhaif Al Nuaimi.

According to Dr. Abdullah bin Mohammed Belhaif Al Nuaimi, globalization is progressing on new paths. The UAE believes in the importance of technology as a major catalyst for economic growth and has been keen to keep abreast of new trends and their applications in various areas of trade. We strongly believe in the importance of joint efforts in narrowing the digital divide, in order to capitalize on the digital economy.

Participating at the exhibition is Al Ahli Holding Group, a multi-billion-dollar company which has been operating in the UAE for past four decades. The UAE owned company, which is also a family business was the first to introduce the concept of outlet mall in the region as well as bring female gyms to the country.

This edition of AIM also features AIM Startup and Future Cities Show, which are happening in conjunction with the Annual Investment Meeting (AIM) 2019. The latest edition of AIM Startup has over 150 promising startup companies under one roof to help facilitate business interactions and investment partnerships with major investors, business leaders, representatives of international institutions, and government entities. The Future Cities Show, on the other hand, will focus on five leading future city solutions, namely AI, blockchain, smart infrastructure, smart mobility, and sustainability. According to Walid Farghal, the event unites leaders from various industries to interact, discuss, and showcase top-notch solutions for a smart sustainable future.

Over 20,000+ corporate leaders, policy makers, businessmen, regional and international investors, entrepreneurs, leading academics, experts, and stakeholders from over 140+ countries from Europe, North America, Latin America, Africa, Middle East, and Asia are participating in the three-day event. The prestigious gathering this year will run under the theme ‘Mapping the Future of FDI: Enriching World Economies through Digital Globalization’.