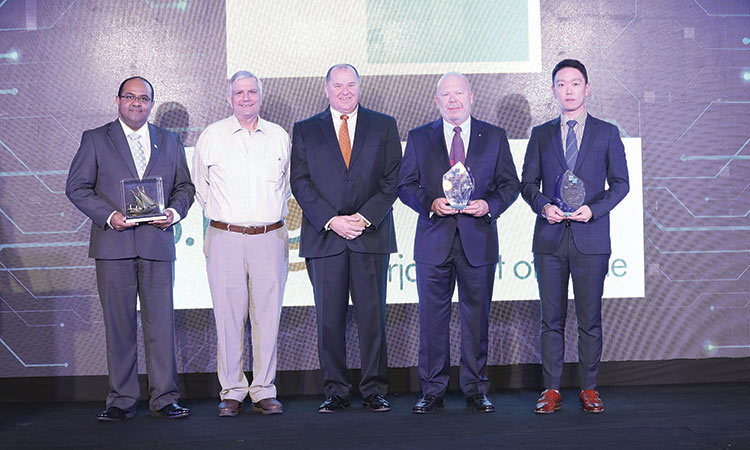 Within a month of the launch, the company has secured four customers for SPOT that serves as an inland extension of the Gulftainer-operated Khorfakkan Container Terminal (KCT). The unique SPOT facility is located at the crossroads of the E311 highway and Maliha Road, providing unparalleled connectivity between Sharjah and Dubai with substantial cost and time savings for customers.

The GALEX service (GLX), offered collaboratively by Emirates Shipping Line (ESL) and Korea Marine Transport Co. (KMTC), was the first to benefit from SPOT’s value-added offering and successfully completed the first direct call at KCT in a record 3.4 hours.

To mark the launch of the service, Peter Richards, Group CEO of Gulftainer, presented commemorative tokens to the new customers of SPOT at a gala event in Dubai in the presence of over 300 representatives of the maritime sector as well as senior company officials.

SPOT offers the fastest transit times to deliver cargo north of Al Barsha area, as well as end-to-end connectivity across the UAE. Its strategic location enables a reduction of delivery costs from port to door by as much as 80 per cent.

Several shipping lines have expressed their interest in securing vessel calls at KCT and using the SPOT service.

In addition to the service at KCT, Gulftainer has started two new direct services at Sharjah’s premier gateway terminal, Sharjah Container Terminal (SCT). The first connects Sharjah to India within three days’ transit time – the shortest in the market – in partnership with RHS Group, while the second links the emirate with upper Gulf countries in partnership with MAG Container Lines (MCL). The move testifies to Sharjah’s potential to become the UAE’s gateway hub.

Established in Sharjah in 1976, the rapidly expanding ports and logistics company - Gulftainer - has built a strong global presence.

In the UAE, the company operates three main ports on behalf of the Sharjah Port Authority – Sharjah Container Terminal (SCT), Khorfakkan Container Terminal (KCT) and Hamriyah Port. Its flagship terminal, the award-winning KCT, is recognised as one of the most productive container terminals in the world.

In March 2019, Gulftainer introduced the Sharjah Port of Trade (SPOT) service, a new strategic sea cargo clearance proposition in the UAE. Located in the UAE’s commercial centre, SPOT significantly raises the bar for service levels in the industry with substantial cost and time savings, enhanced online customs clearance and 24-hour access to major roads. It also offers a state-of-the-art facility for on-site cargo inspection, quality sampling and testing services at the importers’ premises.

Globally, the Gulftainer Group operates and manages ports and logistics businesses in several countries, including Iraq (Iraq Container Terminal, Iraq Project Terminal and Umm Qasr Logistics Centre), Pakistan (GTL-MTI) and Lebanon (Tripoli Container Terminal). In Saudi Arabia, Gulftainer is the majority shareholder in Gulf Stevedoring Contracting Company (GSCCO), which manages and operates the Northern Container Terminal in Jeddah, Jubail Industrial Port and Jubail Commercial Port. The company’s first USA facility, Canaveral Cargo Terminal in Florida, opened in June 2015 following the signing of a 35-year agreement that made Gulftainer the first and only port management company from the Middle East to operate in the country. Gulftainer’s presence in North America expanded in 2018 with the signing of a 50-year concession agreement with the state of Delaware to manage and operate the Port of Wilmington, a deepwater port and marine terminal serving the Eastern Seaboard.

The company aims to expand its global portfolio in the next 10 years to receive more than 10,000 vessel calls and triple its container-handling capacity to 15 million TEUs.

Gulftainer has received multiple accolades in recognition of its quality practices, including the RoSPA Gold Award, acknowledging exceptional levels of occupational health and safety, in 2018, CSR Initiative of the Year and Technology Implementation of the Year at the Logistics Middle East Awards in 2018 and 2017 respectively, and the Port & Terminal Operator Award at the Seatrade Maritime Awards Middle East, Indian Subcontinent & Africa in 2017 and 2016.

Established in 1976, Gulftainer is a privately owned, independent port management and logistics company based in the UAE and for more than 40 years the company been delivering a world-class performance to its customers.

In addition to the facilities in the UAE, Gulftainer’s current portfolio covers activities at Umm Qasr Port in Iraq, Recife Port in Brazil, Tripoli Port in Lebanon and in Saudi Arabia where it manages container terminals in Jeddah and Jubail.