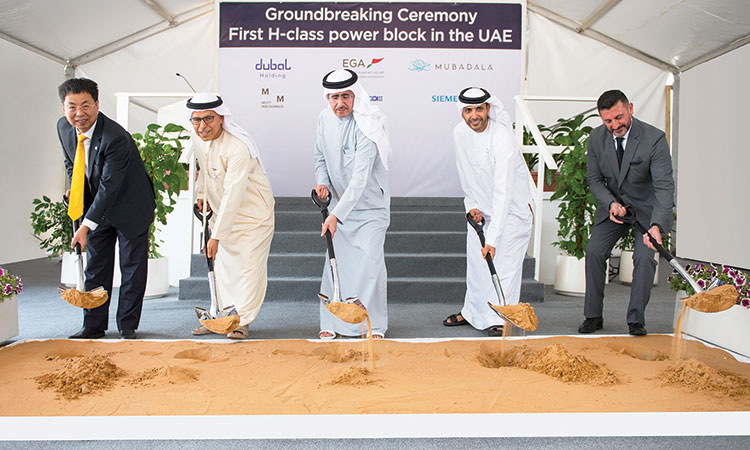 Top officials at the groundbreaking ceremony in Dubai on Sunday.

DUBAI: Emirates Global Aluminium (EGA), Mubadala and Dubal Holding on Sunday officially broke ground on a new Dhs1 billion state-of-the-art power block at EGA’s Jebel Ali smelter in Dubai. EGA is the largest industrial company in the UAE outside oil and gas, and is jointly owned by Mubadala Investment Company and Dubal Holding.

The groundbreaking ceremony was held in the presence of Saeed Mohammed Al Tayer, Vice Chairman of Dubal Holding and Vice Chairman of EGA, and Khaled Al Qubaisi, EGA Board member and Chief Executive Officer of Aerospace, Renewables & ICT at Mubadala.

Mubadala and Dubal Holding have formed a joint venture to develop the new power facility. EGA intends to buy the facility’s output for 25 years following commissioning.

Siemens is to install the UAE’s first combined cycle H-class gas turbine at the power block. The project is also the first in the global aluminium industry to use a Siemen’s H-class gas turbine, a leading technology in efficient power generation.

Saeed Mohammed Al Tayer, Vice Chairman of Dubal Holding and Vice Chairman of EGA, said, “This project reinforces our sustainable development journey, as well as our support of one of the UAE’s most vital industries, in line with the vision and directives of President His Highness Sheikh Khalifa Bin Zayed Al Nahyan, His Highness Sheikh Mohammed Bin Rashid Al Maktoum, Vice President, Prime Minister and Ruler of Dubai, and His Highness Sheikh Mohamed Bin Zayed Al Nahyan, Crown Prince of Abu Dhabi and Deputy Supreme Commander of the UAE Armed Forces, to promote the UAE leading position globally.” “This is done through ambitious initiatives and sustainable development projects that are highly efficient in power generation and water desalination that support the objectives of the UAE Centennial 2071, which outlines the path for a brighter future for generations to come by making the UAE the best country in the world. Now we have broken ground, we look forward to developing this project successfully,” he added.

Abdulla Kalban, Managing Director and Chief Executive Officer of EGA, said, «We are pleased to break ground on this important project which will improve our power generation efficiency at Jebel Ali, saving costs and environmental emissions. We are now focused on safe construction and ultimately starting up the new power block in line with our plans.» Once the new power block is commissioned, five older, smaller and less efficient turbines at EGA Jebel Ali will be put on standby for use only in emergencies.

The project is expected to reduce EGA’s NOx emissions at Jebel Ali by 58 per cent. NOx, which is also emitted by motor vehicles, is amongst a group of emissions targeted for reductions under ‘UAE Vision 2021’ to improve local air quality. EGA requires electricity for aluminium smelting and other industrial operations, and has captive power plants at both Jebel Ali and Al Taweelah. EGA’s electricity generation capacity is 5,450 megawatts. In 2018, EGA produced 2.64 million tonnes of cast metal. Meamwhile, Adnoc Drilling, an Abu Dhabi National Oil Company, Adnoc, subsidiary, today announced the completion of its first fully ‘integrated drilling services’ well in the Al Dabbyia onshore field, in the Al Dhafra Region of the Abu Dhabi emirate.

The well was the first to be drilled in a fully integrated way — delivered to Adnoc Drilling’s client, Adnoc Onshore — following the announcement of a strategic partnership between Adnoc and Baker Hughes, a GE company, BHGE, which is helping to enable and support the growth and development of Adnoc Drilling as the company targets new business opportunities in the UAE and beyond. This first well was completed ahead of plan and within budget, achieving a best-in-class performance in terms of drilling efficiency.

“In partnership with BHGE, AAdnoc Drilling will generate predictable, long-term revenue streams and growth in the market. By leveraging a complete range of drilling services, the company will also enhance its operational performance, in line with Adnoc’s 2030 smart growth strategy, which seeks to increase its crude oil and gas production capacity and optimize costs and efficiencies to create a more profitable upstream business.” Adnoc plans to grow its conventional drilling activity by 40 per cent by 2025 and substantially ramp up the number of its unconventional wells, as it targets 4 million barrels of oil production capacity per day by the end of 2020 and 5 million by 2030.