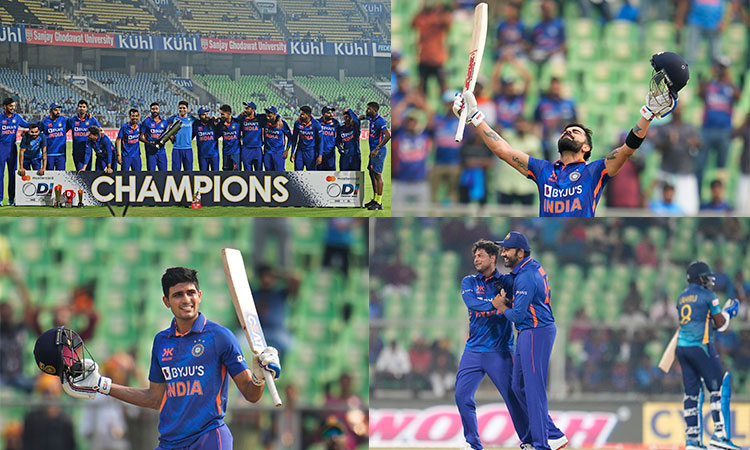 Virat Kohli smashed an unbeaten 166 to help India beat Sri Lanka by 317 runs and record the highest ever victory margin in a One-Day International (ODI) as they swept the series 3-0 on Sunday.

Kohli's third century in his last four matches and 116 by opener Shubman Gill powered India to 390-5 in Thiruvananthapuram, Kerala.

Fast bowler Mohammed Siraj then returned impressive figures of 4-32 and India bowled out the tourists for 73 in 22 overs as India went past New Zealand's 290-run thrashing of Ireland in 2008. 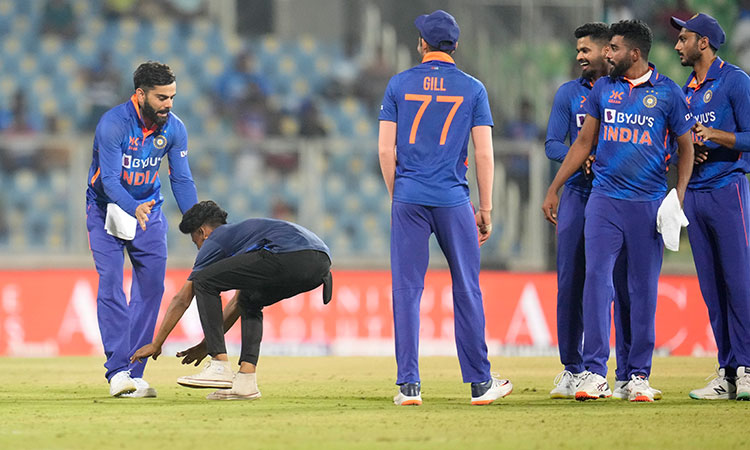 A pitch invader tries to touch the feet of Virat Kohli after India won the final ODI match. AP

Nicknamed "King Kohli," the former captain has been in blazing form since coming out of an extended lean patch last year when he spoke about his mental struggles during the phase.

"Ever since I came back from the break, I am feeling good and I don't have desperation anymore to get to a milestone," Kohli said after being named man of the match and series.

"I want to continue being in this space where I am relaxed and content with how I am playing, and that for me is the most important thing. Today I was happy to be batting out there, and in that space I end up playing my best cricket."

Gill put on 95 runs for the opening wicket with skipper Rohit Sharma, who made 42, to set the tone for the team's batting domination.
Rohit missed out on a fifty after he fell to Chamika Karunaratne but Gill kept up the attack with Kohli and raised his second ODI hundred, celebrating it with a fist bump.

Gill smashed Jeffrey Vandersay for four fours in the over after the ton, but was soon bowled off a slower delivery from Kasun Rajitha.

Kohli put on another century partnership with Shreyas Iyer, who hit 38, and went on to celebrate the ton with his arms and bat raised to an applauding crowd. 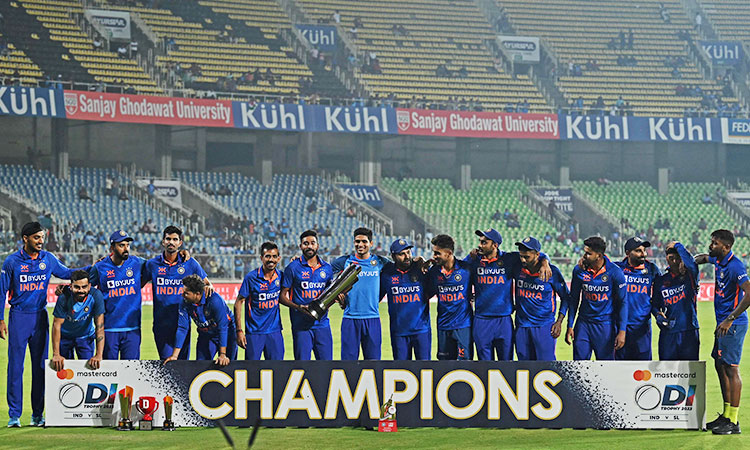 Indian players pose with the trophy after winning the final ODI at the Greenfield International Stadium in Thiruvananthapuram. AFP

The ball before Kohli clinched his hundred saw a nasty collision at the square-leg boundary between Vandersay and Ashen Bandara, with both fielders stretchered off.

Dunith Wellalage came in as a concussion substitute for Vandersay and batted for the tourists at number eight.

Kohli changed gears after his 46th ODI century — three behind Tendulkar's all-time record of 49 — as he smashed Karunaratne for two successive sixes.
Kohli reached his 150 in 106 balls and finished off with 13 fours and eight sixes.

Sri Lanka were never in the chase after Mohammed Siraj struck three times in his first five overs including the wickets of Avishka Fernando, for one, and Kusal Mendis, bowled on four. 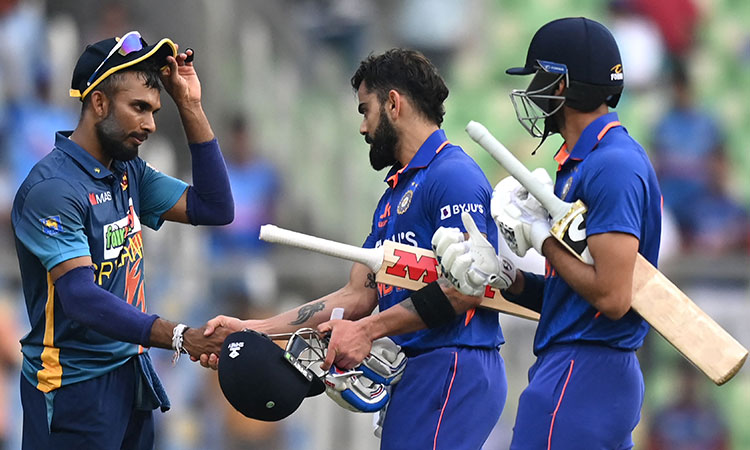 The tourists kept losing wickets to Siraj's pace and swing and the quick also ran out Karunaratne with a direct throw that caught the batsman off guard and out of his crease at the striker's end.

"The way he was swinging the ball, he is a rare talent," Rohit said of his pace bowler. "The way he has come up in the last few years is good to see. He has come from strength to strength and that's really good for Indian cricket."

Mohammed Shami and Kuldeep Yadav picked two wickets each to flatten Sri Lanka's batting with 28 overs to spare, with the tourists losing nine wickets and injured Bandara not batting.

India now host New Zealand for three ODI matches and three Twenty20 internationals with the opening 50-over match in Hyderabad on Wednesday. 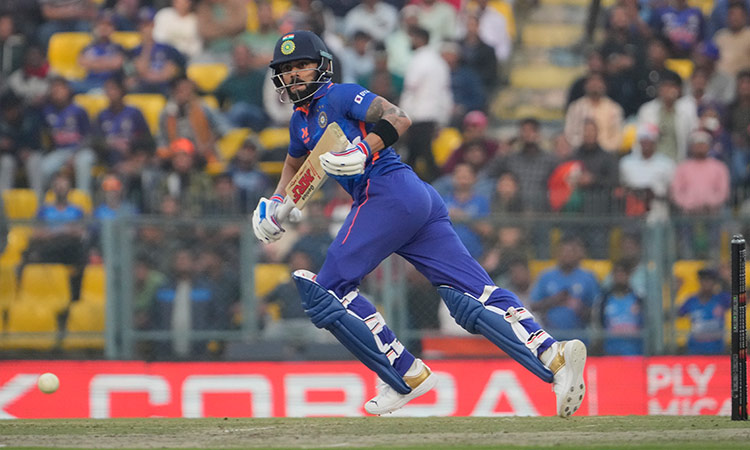 Virat Kohli smashed a brilliant attacking century to set up a convincing 67-run win for India in the opening one-day international against Sri Lanka on Tuesday. 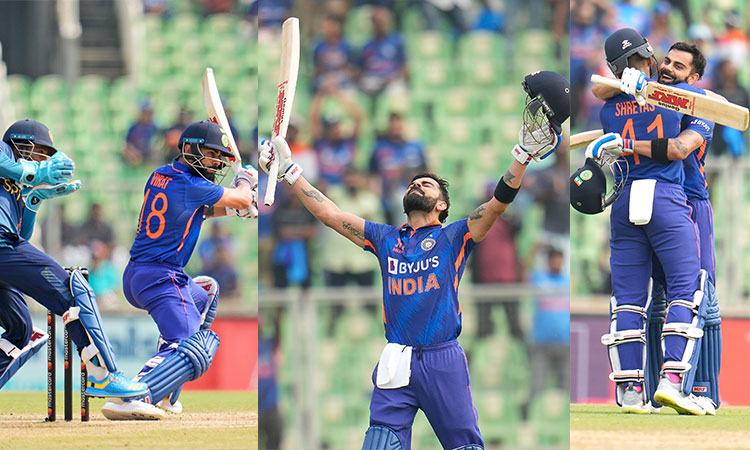 Kohli, 34, smashed an unbeaten 166 to lead India to the biggest-ever ODI win by 317 runs against Sri Lanka on Sunday, his 46th ODI ton and 74th in all formats. 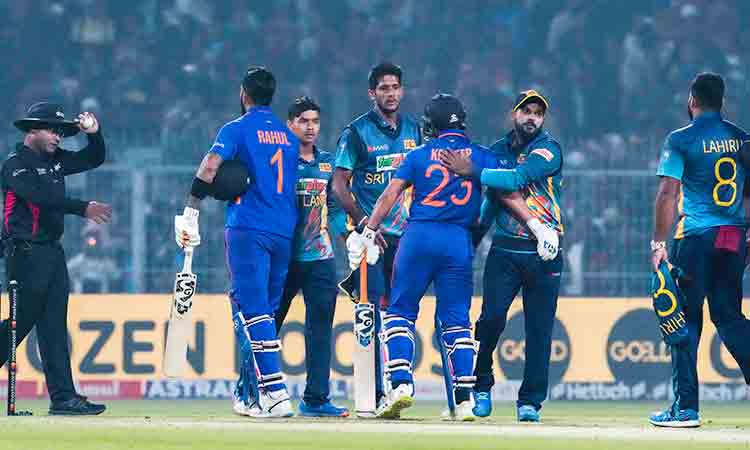 Kuldeep, who was the only change in the team from India's opening win, and fast bowler Mohammed Siraj took three wickets each to bowl out Sri Lanka for 215 in 39.4 overs in Kolkata.