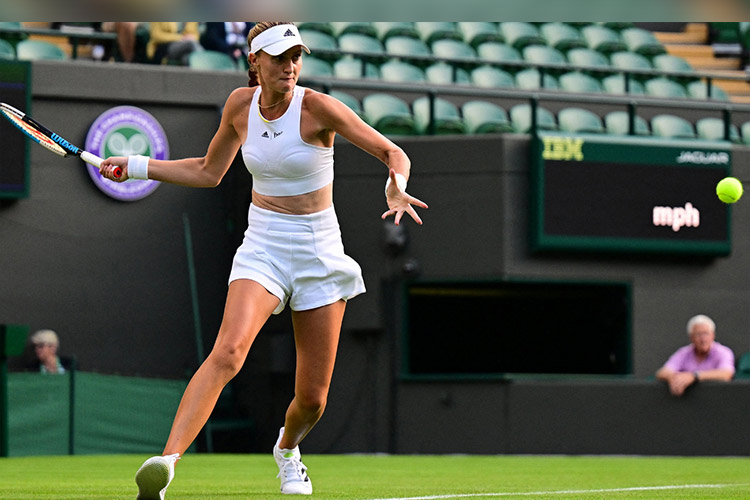 The 29-year-old Mladenovic, who owns an apartment in the Dubai Marina area, advanced to the second round on Tuesday with a tough 7-6 (4), 6-2 win over qualifier Cristina Dinu of Romania.

Leading 5-1 in the first set, the former world number one in doubles somehow stumbled, but did enough to scrape through in the tie-breaker.

Seeded No. 2 at this week’s 25 th Al Habtoor Tennis Challenge, Mladenovic is next scheduled to play Thailand’s Peangtarn Plipuech in their second round match, on Thursday.

Of late, Mladenovic has been struggling with her singles game. But she’s more than willing to put in that extra effort, injuries aside, as she continues her preparations for the 2023 season. “It’s going to be the new year and a new season, and I think I have to set higher goals for myself especially in the singles,” Mladenovic said.

“I am aware of that special feeling of holding all those Grand Slam trophies over the years. I have that special experience, but I also realise that it is the singles game that I need to concentrate on now onwards,” she stressed.

Mladenovic is a nine-time Grand Slam champion, having won the 2016 and 2022 French Open women’s doubles titles partnering Caroline Garcia, and the 2018 Australian Open, 2019 and 2020 French Opens and 2020 Australian Open with Timea Babos.

In mixed doubles, Mladenovic won the 2013 Wimbledon Championships and 2014 Australian Open alongside Daniel Nestor, and the 2022 Australian Open with Ivan Dodig. She became world No. 1 in doubles for the first time in June 2019 and went on to hold that top ranking for a total of 12 weeks.

Mladenovic has also enjoyed success in singles while reaching a career-high ranking of world No. 10 in October 2017. She has won one WTA singles title – the 2017 St Petersburg Trophy – and finished runner-up on seven occasions. Her best Grand Slam result was reaching the quarter- finals at the 2015 US Open and the 2017 French Open.

“I want to keep repeating these top Grand Slam performances in the singles as well. The feeling of holding a Grand Slam trophy is so unique and amazing at the same time. I know how tough it is to achieve glory in the Grand Slams. I know how big it is, and the hope is to replicate this same feeling with the singles,” she related.

However, the 29-year-old French girl, a long-time resident of Dubai, has been struggling with injuries and form in recent times that have forced her to pull out of two of her three tournaments in Europe.

“Right now, I’ve got to focus on these small injuries that keep popping up. After that, it will be to get back into fitness mode and climb up the rankings,” she narrated.

“Breaking into the top-100 would be an immediate priority. The next step will be top-50 so that I can start achieving my potential in the singles as well,” Mladenovic added.