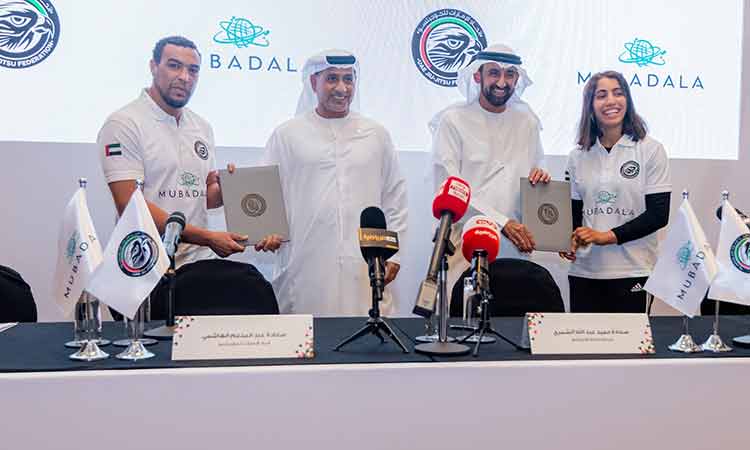 The sponsorship confirms Mubadala as the exclusive sponsor of the UAE national jiu-jitsu team across all its divisions as well as lending its name to the Jiu-Jitsu Arena in Zayed Sports City. The deal aligns with Mubadala’s community initiatives to support Emirati talent and demonstrates the sovereign wealth fund’s eagerness to support the country’s national team, which has won numerous global championships in recent years.

Speaking at a press conference announcing the partnership, Hashemi thanked His Highness Sheikh Mohamed Bin Zayed Al Nahyan, President of the UAE, for his unwavering support of athletics and sports.

“The UAEJJF is always eager to work with the leading national institutions to develop the sport in the UAE,” said Hashemi.

“The Mubadala Investment Company is regarded as a role model for all national institutions when it comes to empowering the nation's youth and encouraging our talented athletes to keep shining. We look forward to strengthening relations. Mubadala already plays a significant role in supporting the sports movement through its various community programmes and, together, we hope to support each other to realise our goals of positioning the country as a world leader in sports and enabling our champions – and future champions – to excel on the global stage.”

Shimmari said: “Witnessing the local youth achieving incredible milestones in sports is a great source of national pride for Mubadala. Through our strategic partnership with the UAE Jiu-Jitsu Federation, we are sponsoring the UAE National Jiu-Jitsu teams and the Jiu Jitsu Arena. “We continue to reinforce our commitment to sport in communities, which creates a sustainable impact. Health and wellness is a priority, and we are proud to provide athletes with the opportunity to excel at local, regional, and international levels.”

The announcement is timely, coming as it does with the national team preparing to participate in several international tournaments, including the Jiu-Jitsu World Championship in Abu Dhabi at the end of this month, the Asian Championship in Thailand in February, and eight other world championships within the next 12 months.

“My fellow team members and I would like to express our sincere gratitude to the UAE Jiu-Jitsu Federation and its partners, especially the team's exclusive sponsor Mubadala Investment Company,” Ketbi said following the announcement.

“We are incredibly grateful for the outpouring of support, and we are deeply moved. We promise to do everything in our ability to provide our best work and make you all proud. We shall carry on our successful journey with the Jiu-Jitsu World Championships.”

The UAE national jiu-jitsu team has enjoyed great success of late, winning at the Asian Championship, the World Championship, and the World Games 2022 in Birmingham, United States.

Promising star Shamma Al Kalbani said: “I wanted to thank all the UAEJJF officials, sponsors and partners on behalf of the national women’s team for all that they do to make sure we have access to the resources that will help us prepare for the world-class competitions.”