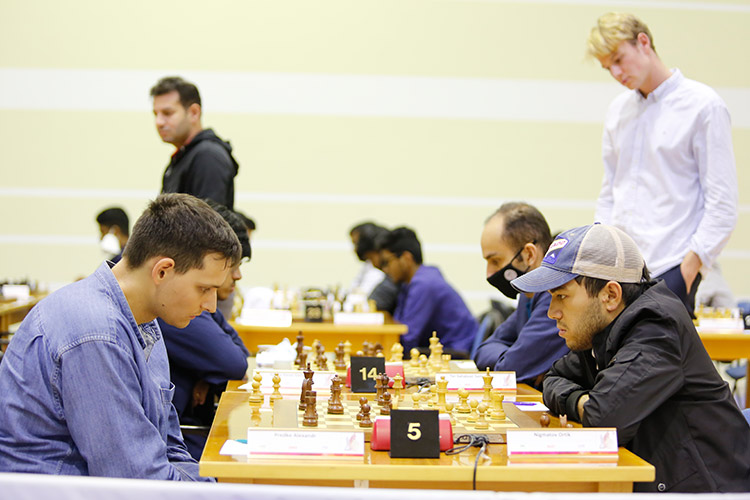 The leaderboard was trimmed down to just two players who will now clash for the pole position in fifth round of the 22nd Dubai Open Chess Tournament.

GM R. Praggnanandhaa of India and GM Rinat Jumabayev of Kazakhstan scored wins on Tuesday to remain the only players with perfect scores after four rounds of chess action at the Dubai Chess and Culture Club.

Jumabayev had a tense battle against India’s GM Sahaj Grover when the latter suddenly walked into a tactical trap that led to a heavy loss of material, handing the Kazakh the full point after 49 moves of an English Opening.

Serbian GM Aleksandar Indjic had India’s GM Arjun Erigaisi on the ropes in the round’s top-board match-up, but could not find the best way forward despite the Indian in a severe bind in the endgame.

Indjic had to settle for a repetition of moves when Erigaisi was able to mount enough counter play in the queenside. With the draw, both players fell to 3.5 points in the company of five others.

The other fourth-round co-leaders, GM Vladimir Akopian, the tournament’s inaugural champion in 1999, and Azerbaijan’s GM Mahammad Muradli, also agreed to a draw to join Indjic and Erigaisi at joint second place.

The two followed a Semi-Slav game that world champion Magnus Carlsen had lost to Levon Aronian in 2017, but Akopian, playing black, deviated from what Carlsen had done and achieved a draw after 44 moves.

Others with 3.5 points are top-seed GM Predke Alexandr of Russia, who bounced back from a draw in the previous round to beat IM Ortik Nigmatov of Uzbekistan. Former Asian chess champion GM S.P. Sethuraman of India, who scored a 108-move win over Indian IM Rathanvel V S in one of the longest games to finish in round four, GM Samvel Ter-Sahakyan of Armenia, who defeated untitled Aditya Varun Gampa of India, and FM Ayush Sharma of India, who scored an upset win over Indian GM Arjun Kalyan.

Nine-year-old Rami Talab scored one of the round’s big wins when he defeated IM Mohamed Tissir of Morocco, who outraced the young Syrian by over 800 points, in 41 moves of a King’s Indian Defense. Talab has 2.5 points. GM Ahmed Adly of Egypt also has 2.5 points after he was held to a draw by untitled Panda Sambit of India.

Among UAE players, untitled Ahmad Al Romaithi is leading the way with 2.5 points after defeating WIM Isha Sharma of India.