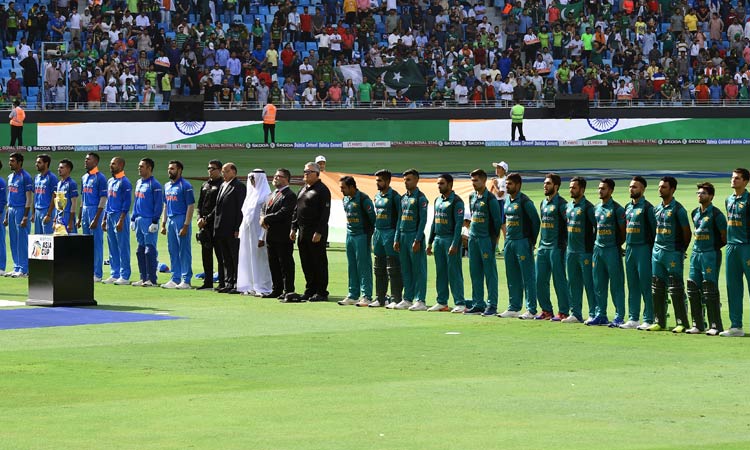 Indian and Pakistan players line up for the national anthem in Dubai International Cricket Stadium. File/AFP

Once upon a time, there were no cricket grounds in the UAE, because it was mostly desert. In the 70s, the Royal Air Force Sharjah used to have only one cement pitch. Now, the UAE has developed by incredible strides into the go-to global ground for not just cricket but other sporting events as well. The nation occupies an international standing unthinkable until a few years.

It is not only a preferred hotspot for incredible high-end living, with creature comforts that reach the stratosphere, and global investors and holiday haven for countless tourists, it has also metamorphosed into an irresistible magnet for sports tourism, with over $1.7 billion spent in total annual sports-related spending, Be it cricket, football, Formula One, tennis, golf, or UFC (Ultimate Fighting Championship), you name the event it's there. Sport icons, from Tiger Woods to Lewis Hamilton to Roger Federer to Rafael Nadal to Novak Djokovic, have all shown their brilliance here. Even the Williams sisters have played their matches in the country.

Also, players from many countries were camping in Dubai before the Olympics, where they were completely safe from the coronavirus and used world-class infrastructure and physio facilities. Thanks to the leadership's pathbreaking vision and support, the UAE has firmly established itself as one of the greatest sporting venues in the world. 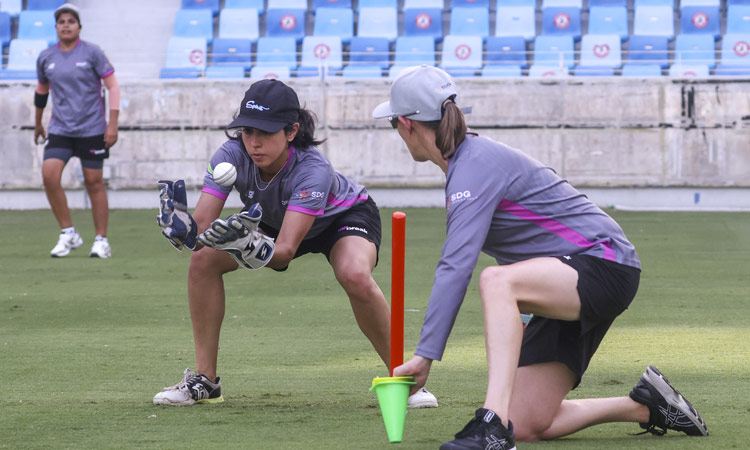 Warriors Yasmin Daswani (C) catches the ball during training ahead of the SDG Fairbreak Invitational 2022 women’s cricket at the Dubai Cricket stadium. AFP

Yes, admit there is a lot of footy fever in this country, judging from the myriad football stadiums and clubs that have mushroomed here. But it is cricket mania that has gripped the minds of the people here. This month the UAE is going to host the Asia Cup 2022. In the past few years, UAE hosted a lot of cricket events – T20 World Cup, IPL, and Pakistan Super League (PSL) – many times.

The country hosted them during the peak of COVID-19 and that makes UAE a standalone country in organising sports events. Hosting major cricket tournaments is not a foreign concept for the UAE. Cricket came to this country in early 1981 when Sharjah started hosting the elite international players well before hosting its first international tournament.

Since then, the UAE has grown strongly, hosting the first part of the 2014 IPL and the full edition of the 2020 IPL. Safety in this country is a major plus point: It also hosted Pakistan's international matches for almost a decade after the 2009 Lahore terror attack. The country, which brought international cricket in the 1980s, got the chance to host one of the biggest tournaments in the world – the ICC T20 World Cup (October 17 to November 14) and now will be hosting the Asia Cup.

The tournament was supposed to be hosted by Sri Lanka, but the political situation forced the Lankan Board to move the tournament to the UAE. According to a report on the economic impact of sports in Dubai, the total economic impact of sports in Dubai is more than $670 million. Huge demand Anis Sajan, Vice Chairman, Danube Group also known as Mr. Cricket UAE, said that UAE has developed into a major meeting location on a global scale thanks to its convenient travel accessibility. 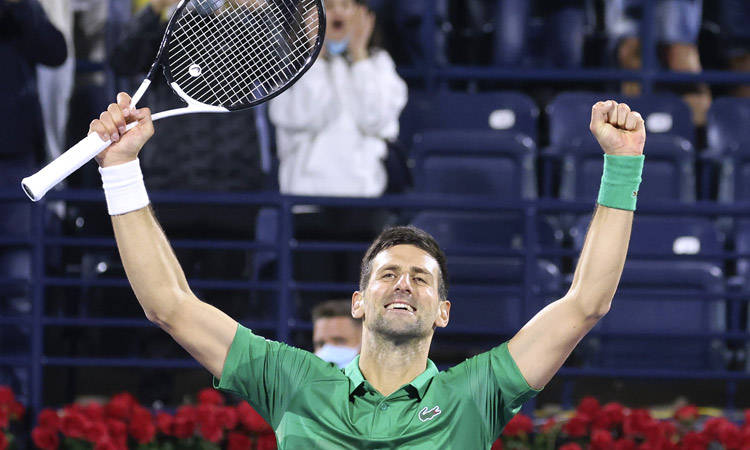 "As we have hosted events like the Grand Prix and football cup, the UAE government has also been very open and supportive of the global sports community. Given the culture and adaptability of the nation, many players frequently travel there to take advantage of the vibrant culture. In terms of cricket, the UAE has top-notch facilities in all its stadiums, including the ICC Stadium, Dubai Stadium, Sharjah Stadium, and even Abu Dhabi Stadium.

These grounds' amenities make it simple to host international competitions. I think the UAE will become more well-known in the world of cricket because of the 2023 International T20 league," he said. Manish Kishore, Managing Director of U-Pro, an indoor sports centre in Dubai, and COO of a franchise in the Delhi Bulls that played in the Abu Dhabi T10 League, talked about the immense potential that Dubai offers for the growth of sports.

"What we are seeing in the sports world of the UAE is a huge demand, behind this view the sports infrastructure created by the leaders is amazing. Apart from matches and practice, easy availability of 5-star hotels means players can enjoy the beach and nightlife while also following the bio-bubble." Manish Kishore says that as a cricket fan, the audience saw the 2018 Asia Cup ground in the UAE and this is going to be the second Asia Cup to observe, according to Indo-Asian News Service.

One of the founder fathers of cricket in Dubai, veteran Shyam Bhatia, recalling the old times, says that today the UAE is the first choice of all sports organisers on the world stage. There was a period when there were no cricket grounds in this desert. The gathering of 22 players and getting a big field was a big challenge. In 1967, Shyam Bhatia introduced matting in Kolkata, which made playing cricket a little easier.

Then when Emirati businessman Abdul Rahman Bukhatir came back to Sharjah after studying in Pakistan, he organised the first cricket tournament in Sharjah and gave a shape to cricket in the UAE. Since then, companies have also prepared their own teams, Shyam Bhatia himself used to call good players from India for jobs in his company so that the team of his company would be strong. That was the period when cricket was taking a formal shape in Sharjah.

In 1981 the Sharjah Stadium came into existence which was like bringing life to UAE cricket. Key role Shyam Bhatia says that no one can deny the contribution that Indians have made in the rise of cricket in the UAE, from the level of organisers and finances to sports and players, as well as the contribution of players and good games from Pakistani citizens. In 1996, under the coaching of Madan Lal, when the UAE qualified for the World Cup for the first time and played the World Cup, all the players in the team except captain Sultan Zarwani, were from India and Pakistan.

This was the year from which the UAE had knocked on the international stage and today, from the ICC Headquarters to the T20 World Cup, IPL, PSL, many international tournaments are being held in Dubai. Shyam Bhatia added that the rise of cricket in the UAE was boosted by the 50-over A Division and 30-over B Division matches as well as the 4-Nation tournament organised by Shyam Bhatia.

In the 4-Nation Tournament, there was a team of Indian, Pakistani, and Sri Lankan local players as well as a fourth team, the Rest of the World. The UAE has indeed come a long way in terms of its sporting infrastructure and hosting international sporting events. In 1984, the iconic Sharjah Cricket Stadium hosted the first ODI in the United Arab Emirates, which was between Pakistan and Sri Lanka.

Now after more than 35 years, it has hosted over 200 ODIs. In the coming times, there are many big tournaments lineup in the UAE, which is like breathing a new life from the point of view of tourism, economy, and sports, according to Indo-Asian News Service.

Several factors work behind the UAE becoming the first choice to host the cricket tournaments: * Having three big world-class cricket stadiums. *Easy availability of 7-8 other small and big stadiums of the same level for practice. *The short distance between the stadiums, players play a match in Abu Dhabi and travel 2 hours later to Dubai for the next match.

The only 1-hour travel distance between Dubai and Sharjah Stadium did not cause fatigue during travel and keeps players fresh throughout the tournament. *The world-class infrastructure for the games and the provision of many indoor practice sessions also do not let the weather conditions affect the convenience of the players. *In a country with more than 20 football stadiums, the easy availability of ground is a bargain for any event. *What makes the UAE special is its legal system.

From the 1980s till the present day, no rioting or fighting has ever been recorded in any match of cricket or football. *Never recorded anything illegal like black marketing of tickets. *No incident of infringement of the privacy of any players has been observed in the field of play or outside to date. *The successful conduct of the T20 World Cup and IPL 2020 during the peak of COVID-19 pandemic has increased the credibility of the UAE Cricket Board.

We all saw the scientific and practical impact of the bio-bubble during big tournaments. *Organising any tournament between citizens of more than 200 countries gives it a new height. *The easy and affordable availability of 5-star hotels is also an important reason why the UAE is slowly becoming the first choice for this type of event. *Cheap flight tickets and hotels to the UAE, as well as a wonderful tourist destination, are a doubling deal for sports fans.